The NBA G League held its draft for the 2022/23 season on Saturday afternoon.

The 28 G League teams affiliated with NBA franchises participated in the event, as did – for the first time – the Mexico City Capitanes. The G League Ignite, which is made up of top prospects and veteran mentors, doesn’t take part in the draft. 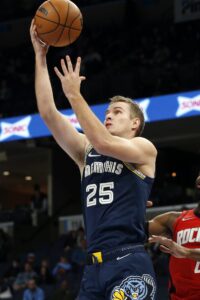 The first player selected in today’s G League draft was 2020 second-round pick Sam Merrill, a swingman who was in camp with the Kings this fall but missed out on earning a regular season roster spot.

Merrill’s contract with Sacramento included a partial guarantee of $150K, making him ineligible to suit up for the Kings’ G League affiliate in Stockton this season. The Cleveland Charge, the Cavaliers‘ affiliate, snared him with the No. 1 overall pick.

The No. 2 pick was another player who was under contract with an NBA team up until last week. Joe Wieskamp was the odd man out in San Antonio, having been waived by the Spurs (despite having a guaranteed 2022/23 salary) to help the team get down to 15 players for the start of the season. The Wisconsin Herd, the Bucks‘ affiliate, grabbed him with the second overall selection today.

Among the other notable picks was No. 4 overall Jared Rhoden, who was selected by the Hawks‘ affiliate, the College Park Skyhawks. Atlanta claimed Rhoden off waivers near the end of the preseason in the hopes of securing his affiliate rights, but it appears he didn’t meet the criteria — the Skyhawks instead secured his G League rights in today’s draft.

The player with the most NBA experience selected in today’s draft was Norris Cole. The veteran guard, with 360 NBA regular season appearances under his belt, went 48th overall to the Grand Rapids Gold, the Nuggets‘ affiliate. Cole, who turned 34 this month, will be looking to take the same path Isaiah Thomas and Lance Stephenson did last season, making an NBA comeback after impressing in Grand Rapids.