11:40am: The Sixers have officially converted Foster’s deal to a two-way contract and waived Brown, the team announced in a press release.

9:36am: Michael Foster Jr. will receive a two-way contract with the Sixers, tweets ESPN’s Adrian Wojnarowski. Charlie Brown Jr. will be released from his two-way deal in a corresponding move.

Foster, a 19-year-old forward, joined the team in July on an Exhibit 10 contract after playing for G League Ignite last season. He appeared in three games during the preseason, averaging 1.7 PPG in 6.1 minutes per night.

Foster also played for the Sixers during Summer League and was considered to be one of the best players not selected in this year’s draft.

Brown, a 25-year-old shooting guard, signed a 10-day contract with Philadelphia in January and was given a two-way deal when that expired. He got into 19 games with the Sixers and averaged 1.5 points and 1.6 rebounds in limited minutes. Brown also played three games for the Mavericks last season and has spent time with the Hawks and Thunder as well.

The move likely sets Philadelphia’s roster ahead of Tuesday’s regular season opener, as the team now has 14 players on standard contracts and a pair on two-way deals. The Sixers are expected to keep one roster spot open, tweets Derek Bodner of The Athletic.

The Nets appear to have “dipped their toe” into the trade market for Nicolas Claxton, ESPN’s Brian Windhorst stated on his latest Hoop Collective podcast, adding that he has heard about Claxton’s possible availability from two different teams (hat tip to RealGM). While Brooklyn may not be actively looking to move the young center, the team is at least “feeling out” the market, Windhorst says.

This isn’t the first time we’ve heard about the Nets considering the possibility of a Claxton trade. Jake Fischer of Bleacher Report said last month that Brooklyn “quietly gauged” the 22-year-old’s value at the 2021 draft. Fischer also reported that some rival executives believed the Nets would make Claxton available ahead of this season’s trade deadline.

Claxton will be eligible for restricted free agency this summer, and the Nets – already far above the luxury tax line – may be hesitant about giving him a sizeable raise. Additionally, rookie big man Day’Ron Sharpe has emerged recently as a viable rotation player who could claim some of Claxton’s minutes.

Still, Mark Deeks of Heavy.com isn’t convinced that trading Claxton would be the right call for the Nets, arguing that it would be difficult for the club to recoup enough value to make it worthwhile in both the short- and long-term.

4:17pm: The Sixers have officially signed Brown to a two-way contract and waived Henry, the team announced in a press release. 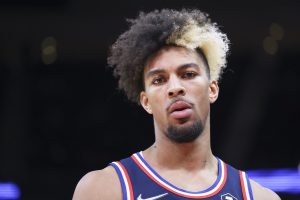 4:00pm: The Sixers will retain guard Charlie Brown Jr. beyond his current 10-day hardship deal, according to Shams Charania of The Athletic, who reports (via Twitter) that Brown will receive a two-way contract from the team. Philadelphia is waiving forward Aaron Henry to open up a two-way slot for Brown, Charania adds.

Brown is a Philadelphia native who played his college ball at Saint Joseph’s. He has bounced around the NBA and G League since going undrafted in 2019, spending time with Atlanta, Oklahoma City, Dallas, and Philadelphia at the NBA level and playing for the College Park Skyhawks, Iowa Wolves, and Delaware Blue Coats in the NBAGL.

Brown’s current 10-day deal won’t expire until Wednesday night, but the Sixers could terminate it early if they want to move him into his newly-earned two-way slot sooner rather than later.

The Sixers have added Charlie Brown Jr. on a 10-day contract via the hardship exception after another prominent player entered health and safety protocols, Kyle Neubeck of the Philly Voice tweets. Philadelphia confirmed the signing in a team press release.

Starting guard Tyrese Maxey will miss Monday’s game against Houston due to those restrictions, joining Matisse Thybulle and two others.

Brown was signed to a 10-day contract by the Mavericks but it wasn’t renewed. He made three brief appearances with Dallas.

Brown had been playing with the NBAGL’s Delaware Blue Coats before the wave of COVID positives around the league. He also appeared in a total of 19 games with the Hawks in 2019/20 and the Thunder in 2020/21.

A Philadelphia native, Brown played his college basketball at Saint Joseph’s, where he averaged 19.0 PPG in his final season with the Hawks.

Here’s are the latest updates regarding players entering or exiting the league’s health and safety protocols or on 10-day contracts:

DECEMBER 23: The Mavericks have officially signed Brown to a 10-day deal, the team announced today (via Twitter). The team has now finalized three hardship signings this week and has two more (Brandon Knight and Carlik Jones) reportedly on tap.

Given that Hardaway is the fourth Maverick to be placed into COVID-19 protocols in the last four days, the Mavericks will ink shooting guard Charlie Brown Jr. to a 10-day contract via the league’s hardship exemption, Charania tweets.

The Thunder have claimed big man Mamadi Diakite off waivers from the Bucks, the team announced in a press release. Milwaukee waived Diakite on Friday.

Diakite, 24, went unselected in the 2020 draft. He signed a two-way deal with the Bucks shortly thereafter, then signed a multi-year deal at the end of the season. Only $100K of his salary was guaranteed for next season, however, making it easier for Milwaukee to waive him.

Diakite was a force in the G League during his 12 games last season. He averaged 18.5 points, 10.4 rebounds and 2.1 blocks per contest, shooting 58% from the floor. The 6’9″ Virginia product will have the ability to add depth for a young Thunder frontcourt this season.

Because Diakite is on a three-year contract, the Thunder couldn’t use the minimum salary exception to claim him and had to instead use part of a traded player exception, as Bobby Marks of ESPN notes (via Twitter). The team likely used a portion of its $9.59MM TPE from last season’s George Hill deal.

The Thunder have signed guard Charlie Brown Jr. to a multi-year contract, according to a team press release.

Brown had signed a pair of 10-day contracts but the second of those deals expired on Friday. He has appeared in eight games, averaging 4.1 PPG, 1.8 RPG and 0.9 APG in 15.1 MPG. He scored seven points in his last appearance against Sacramento on Tuesday.

The terms and length of the contract weren’t disclosed but it’s unlikely he’ll have much – or any – guaranteed money beyond this season. Oklahoma City plays its season finale against the Clippers on Sunday.

The Thunder have signed guard Charlie Brown Jr. to his second 10-day deal following the expiration of his first one on Tuesday night, the team announced in a press release.

Since first joining Oklahoma City late last month, Brown has logged time in three games, including one start, and is averaging 5.0 PPG, 2.3 RPG and 1.0 SPG across 15.9 MPG.

Brown’s new deal will run through May 14. The Thunder will have to decide after that whether to sign him to a rest-of-season contract that covers the club’s final game on May 16.

With the Thunder now officially eliminated from play-in tournament contention, the rebuilding team appears open to developing some of its less-heralded young prospects. According to head coach Mark Daigneault, 6’6″ second-year shooting guard Charlie Brown Jr. will start and receive significant run while on a 10-day deal with the club, tweets Cameron Jourdan of the Oklahoman.

Brown inked a two-way deal with the Hawks after going undrafted out of St. Joseph’s for the 2019/20 season. So far with the Thunder, he’s averaging 16.0 MPG across three games.