Luka Doncic is listed as questionable for Tuesday’s contest at the Clippers, the Mavericks announced (via Twitter). The star guard is dealing with left ankle soreness.

Doncic is one of the NBA’s best players and a leading MVP candidate, so obviously his potential absence would be detrimental to the team’s chances — Dallas has gone 0-4 this season without him, including Sunday’s loss at Oklahoma City.

Here are some more health updates from around the NBA:

Spurs guard Devin Vassell is set to have his injured left knee scoped, the team has announced in a press statement. 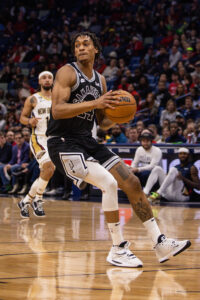 The third-year guard sat out San Antonio’s 117-114 loss to the Knicks Wednesday with knee soreness, and has missed three of the team’s last four games due to the issue. Head coach Gregg Popovich had previously claimed the injury would make Vassell’s status day-to-day.

San Antonio indicates that Vassell is set to go under the knife on January 11 in New York, with Dr. Riley J. Williams scheduled to operate on the pesky joint.

Though a recovery timeline has yet to be established, losing Vassell for any extended period will hamper the on-court product for San Antonio. Given that the Spurs have appeared open to trying their lottery luck this summer, the club may ultimately not mind a lengthy absence for one of its biggest contributors.

Reserve wing Romeo Langford started in Vassell’s stead last night against New York, and could be in line for a major uptick in minutes and touches as Vassell recuperates.

Alex Caruso was ruled out for the remainder of Wednesday’s win over the Nets after suffering a sprained right ankle, the Bulls announced (via Twitter). The veteran guard rolled the ankle when he jumped and landed on Ben Simmons‘ foot, according to K.C. Johnson of NBC Sports Chicago (Twitter link).

As Johnson notes (via Twitter), it’s an unfortunate setback for the defensive stalwart, who recently returned from a three-game absence after dealing with a concussion and shoulder sprain. We’ll have to await further updates to see if Caruso will miss more time with the injury.

Here are a few more injury notes from around the NBA:

The Mavericks will play a preseason game next fall in the UAE capital of Abu Dhabi, Marc Stein reports in a Substack story.

Dallas will also play a game against perennial Spanish League power Real Madrid during the overseas journey. Mavericks owner Mark Cuban wanted to arrange a preseason game in Madrid for Luka Doncic, who played for Real Madrid until he became an NBA lottery selection.

Mavericks center Christian Wood, inserted into the team’s starting lineup in recent weeks, seems to finally be adjusting to his new Dallas teammates, and his two-way output has blossomed of late, writes Callie Caplan of The Dallas Morning News.

“Any time a trade happens, it’s just not the numbers or analytics,” head coach Jason Kidd said. “A human athlete has to perform and has to make the adjustments. As much as we want trades to happen and for them to be successful overnight, it just takes time… You can see he’s starting to get comfortable, and his teammates are getting comfortable with him, and now it’s just a matter of building on the foundation that we’ve built.”

“He’s active,” All-NBA guard Luka Doncic said of Wood earlier this week. “He listens to us, and that’s what he needs to do. He helped us a lot, not just [Sunday], but the last couple games he’s been amazing.”

Across his last eight contests, Wood has been averaging 20.3 PPG on 51.8% shooting and 9.1 RPG, while his net rating increased to plus-8.4 points per 100 possessions.

“I feel like my defense has picked up a little bit in these few weeks,” Wood said, “and these guys just having that confidence to trust in me to make defensive plays.”

Wood is now eligible for a four-year contract extension worth as much as $77MM, but Caplan notes that neither the Mavericks nor Wood’s reps seem to have made major inroads into negotiations as of now.

If there was a bright side to the Mavericks‘ 29-point loss to the Bulls Saturday night, it provided an opportunity for newly signed Kemba Walker to make his season debut, writes Brad Townsend of The Dallas Morning News.

A late starting time Friday, followed by a flight, meant the Mavs didn’t arrive in Chicago until 3:45 a.m. Coach Jason Kidd held out Luka Doncic, Josh Green and Maxi Kleber, who are all dealing with minor injuries, creating an opportunity for Walker. He responded with eight points and five assists in 20 minutes while playing for the first time since February.

“I wouldn’t say (I felt) super-comfortable,” Walker said. “But it’s my first game with new guys, trying to see where I can fit in, so it might take a little time. Or might not, I don’t know. But it was good to be out there with those guys. They made me feel good. They’ve been treating me well since I got here.”

The Mavericks also got an extended look at Jaden Hardy, a 20-year-old rookie who has spent much of the season in the G League. The second-round pick played 23 minutes Saturday and scored 15 points.

“It was a long travel day, but it felt good being out there being with the guys,” he said. “It was a tough loss, but I think we’ll put this one in the past and be ready for the next one.”

All-Star Mavericks guard Luka Doncic is off to a high-scoring start for Dallas, but it hasn’t entirely translated to team success for the 6-5 club. Seth Partnow of The Athletic explores whether Doncic may be carrying too big a burden for the Mavericks in the team’s heliocentric offense.

Through 11 games, Doncic is averaging 33.6 PPG for the club. Partnow notes that so much of the Mavericks’ offensive attack revolves around Doncic, operating as the team’s primary play-maker and scorer, that he is already showing signs of exhaustion late in games. Partnow writes that the effects of handling so much of the team’s offense are even visible in the second halves of recent games, when Doncic’s output subsides somewhat.

There’s no timetable for Kawhi Leonard‘s return to action, though coach Tyronn Lue says things are moving in the right direction, Ohm Youngmisuk of ESPN reports.

Leonard will miss his eighth straight game when the Clippers host Cleveland on Monday. He was sidelined all of last season while rehabbing from a knee injury and has only appeared in two games this season.

“There’s really not a time frame of when he is going to be back,” Lue said. “The biggest thing is just the testing that he has to go through with the medical and the slow progression of just getting better every single day. And so we’re just taking it day by day right now, not really a timetable.”

The Spurs‘ decision to waive Joshua Primo has created an opportunity for rookie guard Blake Wesley, writes Jeff McDonald of The San Antonio Express-News. Wesley made his NBA debut Friday night and posted 10 points and four assists in 15 minutes in a victory over the Bulls. He showed none of the shooting problems that plagued him in Summer League, hitting 4-of-6 from the field and 2-of-3 from three-point range.

“You got to stay ready,” said Wesley, who was taken with the 25th pick in this year’s draft. “I was just ready today.”

Wesley may be joining lottery pick Jeremy Sochan in San Antonio’s rotation, but McDonald notes that Malaki Branham, who was taken 20th overall, is still waiting to play in his first game.

There’s more on the Spurs:

Mavericks star Luka Doncic likes what he has seen from new teammate Christian Wood so far this season, as Brad Townsend of The Dallas Morning News writes. Wood has racked up 50 points and 20 rebounds in just 49 minutes of action in his first two games with Dallas.

“He’s a great player,” said Doncic, who has a +26.3 net rating when sharing the court with Wood. “He listens to us. He accepts his role, and he’s just doing amazing stuff out there. It’s only two games, but he’s going to be very good for us.”

Wood, who has come off the bench so far, is making a strong case to be promoted to the starting five, but the Mavericks are unlikely to make any immediate changes to their lineup, according to Tim Cato of The Athletic. Dallas’ coaching staff wants to assess its current rotation across a larger sample before drawing any conclusions, Cato explains.