Pelicans guard Lonzo Ball is happy to get a fresh start in New Orleans, leaving his up-and-down history with Los Angeles in the rear view mirror, he explained in an interview with Shams Charania of The Athletic.

Ball, 21, was traded to New Orleans along with Josh Hart, Brandon Ingram and three first-round draft picks in exchange for All-Star forward Anthony Davis this past June.

“It was only a matter of time before a trade happened,” Ball said. “I pretty much knew a trade would happen. Any time you have a player like Anthony Davis available, I knew it was going to be my time. I was looking forward to it and I was excited for a new start. Getting out of L.A. for the first time in my life. I’m happy about it.

“It was just time for a change. I got hurt both years and didn’t do what I wanted to do. I was blessed to stay home and play in front of everybody, but it wasn’t working over there.”

New Orleans sports an impressive young nucleus of Ball, Ingram, Hart, Zion Williamson, Jaxson Hayes, Nickeil Alexander-Walker and others entering the 2019/20 season. The team also managed to add veteran players such as J.J. Redick and Derrick Favors during the offseason.

“Our core could be even better here,” Ball said. “B.I., J. Hart were already part of the young core with me in L.A., and now we have Zion, Nickeil (Alexander-Walker), Jaxson (Hayes), and other guys that want to work and get better. The sky’s the limit.”

There’s more out of the Southwest Division tonight:

The Pelicans have become the latest NBA franchise to add a female assistant coach to their ranks, announcing today in a press release that WNBA Hall-of-Famer Teresa Weatherspoon has joined the franchise as a player development coach.

According to the Pelicans, Weatherspoon and newly-hired coach A.J. Diggs will serve as two-way assistant coaches, working closely with the club’s two-way players and accompanying them as they go back and forth between the Pelicans and the Erie BayHawks. Currently, New Orleans’ two-way players are Josh Gray and Zylan Cheatham.

Weatherspoon is the second former WNBA star to be hired the Pelicans this offseason, joining Swin Cash, who was named the club’s VP of basketball operations and team development.

Much has been made of the withdrawals from Team USA by prominent players as it prepares for the FIBA World Cup in China this summer. Team Canada has experienced similar issues.

Knicks lottery pick RJ Barrett and Nuggets guard Jamal Murray are on the roster but will only participate in training camp. Barrett is dealing with a mild calf strain, while Murray is nursing an ankle injury, Blake Murphy of The Athletic tweets.

Among the NBA players who are on the roster and intend to participate in the tournament are Kings guard Cory Joseph, Heat forward Kelly Olynyk, Magic center Khem Birch and Raptors big man Chris Boucher. Toronto’s Nick Nurse is the head coach of the team, which will play seven exhibition games before its FIBA opener against Australia on September 1.

The series of withdrawals from Team USA’s World Cup training camp rosters continued on Friday, as ESPN’s Adrian Wojnarowski reports (via Twitter) that Clippers guard Landry Shamet has opted against participating. Shamet had been penciled in as a member of USA Basketball’s Select Team.

“He was appreciative of the opportunity and hopes to be part of USAB again in future,” agent George Langberg said of Shamet, who will focus on preparing for what he hopes will be a long Clippers season that ends with a deep playoff run.

Of course, Team USA isn’t the only club dealing with NBA players removing their names from consideration. After finding out earlier this week that R.J. Barrett wouldn’t participate in this year’s World Cup, Team Canada will now also be without Mavericks big man Dwight Powell, league sources tell Marc Stein of The New York Times (Twitter link). Having signed a contract extension with Dallas this offseason, Powell will use the time to focus on the upcoming season, says Stein.

JULY 6, 9:31pm: The Mavericks have officially signed Powell to his three-year extension, which will go into effect in 2020/21, per the NBA’s transactions log.

JUNE 30, 5:30pm: The Mavericks and Powell have agreed to terms on a three-year, $33MM extension, tweets Stein.

JUNE 30, 10:36am: The Mavericks are planning to make an extension offer to Dwight Powell when free agency officially begins later today, and the expectation is that an agreement will soon follow, tweets Marc Stein of The New York Times. The new deal will pay him $33MM over three seasons.

Dallas has made signing the 27-year-old center-forward one of its top offseason priorities, Stein adds (Twitter link). Powell averaged a career-best 10.6 PPG this season, along with 5.3 RPG, in 77 games.

Powell’s extension doesn’t take effect until the 2020/21 season, so it won’t affect the cap space that the Mavericks have this summer, notes Tim MacMahon of ESPN (Twitter link). Powell has already opted into his current deal for next season at $10.3MM.

Mavericks big man Dwight Powell has officially exercised his player option for the 2019/20 season, reports Marc Stein of The New York Times (via Twitter). As a result of the move, Powell will earn a $10,259,375 salary next season, per Basketball Insiders. 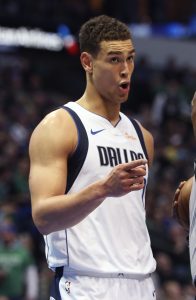 There were conflicting reports earlier this spring on whether Powell would opt in or out. After a May report suggested that he was expected to hit the open market, a June update confirmed that an opt-in was anticipated instead.

The Mavericks have long indicated that they plan to lock up Powell to a longer-term deal, which could’ve been done whether or not he exercised his player option. The conflicting reports on his option decision may have stemmed from confusion over whether he’d sign a brand-new deal with Dallas after opting out or sign an extension after opting in.

Powell, who will turn 28 next month, averaged a career-high 10.6 PPG to go along with 5.3 RPG, 1.5 APG, and a .597 FG% in 77 games (21.6 MPG) last season for the Mavs. The former second-round pick has spent the last four seasons in Dallas, and team management wants to ensure he sticks around a little longer.

Team owner Mark Cuban spoke at season’s end about a three-year extension for Powell, though it’s not clear if he meant three new years or three years in total. Either way, I’d expect Dallas to work on completing that deal in the coming weeks.

Even with Powell’s salary on their books, the Mavs should enter the free agent period with at least $29MM in cap room available, as we detailed in April. Meanwhile, Powell would be eligible to sign an extension that takes effect in 2020/21 with a starting salary worth up to 120% of his previous salary.

1:00pm: Tim MacMahon of ESPN confirms (via Twitter) that Powell will opt in and sign an extension, adding that the Mavs view the big man as a “core piece” who can be a good fit besides Kristaps Porzingis.

12:18pm: After a May report indicated that Dwight Powell would turn down his player option for 2019/20, the Mavericks‘ big man said this week that he’s not sure “where the information came from.” He stopped short of calling the report false or announcing that he’d opt in, but a source tells Brad Townsend of The Dallas Morning News (Twitter link) that Powell does, in fact, plan to pick up his player option by June 29.

Exercising his ’19/20 option would put Powell in line for a salary worth $10,259,375 next season, as Basketball Insiders’ data indicates. According to Townsend, the 27-year-old intends to subsequently sign an extension with Dallas that would keep him under team control beyond next season. Team owner Mark Cuban spoke at season’s end about a three-year extension for Powell, though it’s not clear if he meant three new years or three years in total.

As we’ve noted multiple times when discussing Powell’s situation this offseason, there are two paths he could choose if he wants to stay with the Mavs. Opting out and negotiating a brand-new contract is one path — the other would be opting in, then signing a contract extension, as Townsend suggests. The fact that both scenarios are viable may have contributed to the confusion in recent weeks over his option decision.

Assuming Townsend’s source is correct and Powell intends to opt in, the Mavs should enter the free agent period with at least $29MM in cap room available, as we detailed in April. Meanwhile, Powell would be eligible to sign an extension that takes effect in 2020/21 with a starting salary worth up to 120% of his previous salary.

Dwight Powell has until June 29 to decide what he wants to do with the player option on the final year of his contract. Yahoo! Sports previously reported that the big man would decline that $10.26MM option and hit the open market. However, Powell addressed that report today and didn’t exactly confirm it.

There was speculation among NBA observers and insiders that, despite apparently planning to turn down his option, Powell intended to sign a new contract with a lower annual salary but more overall money. There’s still a chance that Powell goes that route.

“There’s no place I would rather be than Dallas,” Powell said. “I think I have done everything to show that I love it here. This team gave me my shot. They’ve treated me extremely well, as an athlete and as a man. I love the Dallas Mavericks.”

If the Mavericks intend to carve out salary cap space for a max contract player, they’ll need to make at least one or two moves. The team is currently projected to have roughly $29.3MM in available space if Powell opts in. Working out an arrangement with Powell that lowers his annual salary is just one of the ways that Dallas can create additional cap space, as Luke Adams of Hoops Rumors recently detailed.

The decision comes as somewhat of a surprise, since Powell had expressed interest in staying with Dallas and owner Mark Cuban mentioned during a radio interview that Powell might receive a three-year extension. It’s still possible that Powell returns with the Mavericks but he could be leaving quite a bit of money on the table for someone who has served a second-unit role most of his career.

The addition of Kristaps Porzingis made it likely that Powell would remain a bench player, so perhaps he’s looking for a team that views him as a starter. Dallas is expected to be very active in the free agent and trade markets this summer, as it only has $45.9MM in guaranteed salaries on its current payroll for next season.

Speaking on Thursday to reporters, including Brad Townsend of The Dallas Morning News (Twitter link), Powell said, “I definitely want to be here.” However, he didn’t offer specifics on whether that meant picking up his player option or opting out and negotiating a new deal with Dallas. Even exercising his option and then working out a contract extension could be a possibility.

For their part, the Mavericks intend to do all they can to make sure Powell sticks with the team “for years to come,” president of basketball operations Donnie Nelson said on Thursday (Twitter link via Townsend). According to Jeff Cavanaugh of 105.3 The Fan (Twitter link), owner Mark Cuban went a step further, suggesting during a radio appearance that the club plans to extend Powell for three seasons.

Nothing’s official yet, so while we wait to see what sort of agreement Powell and the Mavs might reach, let’s round up a few more items out of Dallas…