Lakers big man Anthony Davis is expected to begin running on Monday, Shams Charania of The Athletic said in an appearance on FanDuel TV (Twitter video link). Charania adds that Davis will start contact work shortly after he starts running, and the Lakers hope the 29-year-old will return to the lineup in early February.

ESPN’s Dave McMenamin reported a week ago that the team was hopeful that Davis, who has been out since December 16 after suffering a stress reaction in the navicular bone in his right foot, could return return in a couple weeks. Based on Charania’s report, it sounds like that rough timeline may have been pushed back a little bit, but there’s no indication that Davis had a setback.

Clippers head coach Tyronn Lue has claimed that a report indicating that Reggie Jackson had won the L.A. starting point guard gig over John Wall did not come from him, and that he has yet to make a final decision, according to Andrew Greif of The Los Angeles Times. Los Angeles will play its first regular season contest this Thursday.

“Both guys are in a great position, and their mindset is in the right place,” Lue said. “It is about winning. It is not about who’s the starter, who’s the best player. It’s about the right fit and trying to win, and both of those guys are on board with that.”

Here’s more out of California:

Free agent guard Dennis Schröder won’t accompany his German teammates to Sweden for Thursday’s opening game of the FIBA World Cup Qualifiers, according to Eurohoops. Schröder is recovering from an ankle injury he suffered in the Hamburg Super Cup tournament and will remain in Germany for treatment. There’s a chance he may recover in time for next Sunday’s home contest against Slovenia.

Schröder remains unsigned after splitting last season with the Celtics and Rockets. Although he received positive reviews in Houston after being acquired at the trade deadline, the team is emphasizing youth and doesn’t appear interested in bringing back Schröder.

Germany is already without Pacers center Daniel Theis, who will miss the World Cup Qualifiers and possibly next month’s EuroBasket tournament due to an undisclosed injury. He is training individually and being monitored by the German national team’s medical staff, according to Johnny Askounis of Eurohoops.

The Germans are also missing Maxi Kleber, Moritz Wagner and Isaac Bonga due to injuries.

8:37pm: The Clippers have officially announced their extension with Zubac, issuing a press release to confirm the move. 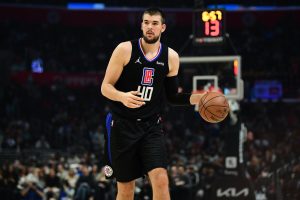 “For four seasons, Zu has been a pillar of our team, durable and dependable,” president of basketball operations Lawrence Frank said in a statement. “He does whatever is needed: setting screens, rolling to the rim, anchoring the interior of the defense. He is a reliable teammate and a consistent pro, just entering the prime of his career. We are excited to continue growing with him.”

4:12pm: The Clippers and Ivica Zubac have agreed to a contract extension that will cover the next three years and will be worth $33MM, agents Jeff Schwartz and Mike Lindeman tell Adrian Wojnarowski of ESPN (Twitter link).

The Clippers held a team option on Zubac for the 2022/23 season worth $7,518,518, but will decline that option as part of the extension agreement, Wojnarowski reports.

The new deal, which will run through the 2024/25 season, won’t include any options, according to Andrew Greif of The Los Angeles Times (Twitter link).

Zubac will be the second Clippers player to receive an extension between the end of the regular season and the start of the NBA’s 2022/23 league year, joining Robert Covington.

Los Angeles now has more than $171MM in guaranteed money on its books for next season without accounting for their reported agreement with John Wall – rumored to be worth the taxpayer mid-level exception – or possible new deals for free agents like Nicolas Batum, Isaiah Hartenstein, and Amir Coffey. The team’s tax bill projects to be worth at least $80MM, assuming a taxpayer MLE contract for Wall, tweets Yossi Gozlan of HoopsHype, and that number could continue to grow.

Zubac won’t be eligible to be traded for six months once he officially signs the extension, since it exceeds the extend-and-trade limits.

As we noted in our Clippers offseason preview earlier today, L.A. holds a $7,518,518 team option on center Ivica Zubac, who is also extension-eligible this offseason. He said this week that he enjoys playing for the team and hopes to stick around.

“I want to stay and I think they want to keep me,” Zubac told Antonis Stroggylakis of Eurohoops.net. “I think I should be there and they’re going to pick (the option) up. I like Los Angeles a lot and I like the Clippers. It’s like a family to me. Hopefully, everything is going to work out.”

“It’s great,” Zubac said about the trust he receives from Clippers coach Tyronn Lue. “I hope that keeps on going. Every year I get more and more minutes so, hopefully, by the next year I’ll get even more. The coach trusts me, the teammates trust me and I’m really enjoying my time there.”

The Clippers were a much more optimistic bunch than most teams after getting eliminated from playoff contention, Jim Alexander of the Orange County Register writes. That’s due to the return of perennial All-Star Kawhi Leonard from his knee injury, plus the expectation that Paul George will have better injury luck next season.

In addition to being out for most of the season due to an elbow injury, George missed Friday’s play-in tournament loss to New Orleans after testing positive for COVID-19.

“We get our main guys back. I mean, we can be dangerous,” coach Tyronn Lue said. “I think when you get Kawhi and PG back healthy, Norm (Powell for) a full season … this team can be pretty special. But it’s all about health. Our young guys (Terance Mann, Amir Coffey, (Luke) Kennard, Ivica Zubac), all those guys have (had) a chance to develop and play meaningful games. They played big for us. Our veteran guys, we already talked about what Marcus (Morris), Nico (Batum), Reggie (Jackson) have brought to this team. We got to get back, get back to the drawing board. But I’m very excited for this group, the guys coming back.”

We have more on the Clippers:

The Raptors have phoned rival teams to gauge what sort of return they could get in exchange for Goran Dragic‘s expiring contract and a first-round pick, according to Jake Fischer of Bleacher Report.

Toronto is known to be in the market for an upgrade at center, but likely won’t want to part with any of its core players in an in-season deal. That makes Dragic’s expiring deal and a draft pick the most logical package for the Raptors to offer.

That framework of Dragic and draft assets was brought up in negotiations for Pacers center Myles Turner before he sustained a stress fracture in his foot, says Fischer.

Here are a few more trade-related rumors from around the NBA: