Makur Maker has signed with Australia’s Sydney Kings, according to Alessandro Maggi of Sportando. The 6’11” Maker, who attended Howard University last season, withdrew from this year’s draft but missed the NCAA’s withdrawal deadline. He’ll join the NBL’s Next Stars program with the aim of improving his draft stock.

“I can’t wait to learn from Luc Longley and Andrew Bogut, probably the best two big men in Australian basketball history who both were NBA champions,” he said. “Furthermore, under the leadership of our head coach Chase Buford, who is also of NBA championship background, and the front office with the CEO Chris Pongrass who was with the Memphis Grizzlies, I feel that this is my best pathway to becoming an NBA lottery pick next year.”

While the game itself won’t be played this year due to the coronavirus pandemic, McDonald’s formally announced its ceremonial rosters this week for the annual All American Game, a showcase of the nation’s top high school players.

The 24-player boys squad is headlined by a number of prospects who are expected to be lottery selections in the 2022 NBA draft, including Chet Holmgren, Paolo Banchero, and Jabari Smith, whom ESPN’s Jonathan Givony and Mike Schmitz had as the top three picks in their first ’22 mock draft in December.

Former NBA center Johnathan Williams has parted ways with Turkish team Galatasaray, according to a team press release. The undrafted big man appeared in 15 games, including six starts, with the Wizards last season. He also saw action in 17 games for Washington’s G League affiliate, the Capital City Go-Go. He played in 24 games with the Lakers during the 2018/19 season.

SEPTEMBER 6: Galatasaray has officially signed Williams, according to Nicola Lupo of Sportando.

SEPTEMBER 5: Johnathan Williams, who spent most of this season with the Wizards, could be joining Galatasaray in Turkey, tweets Emiliano Carchia of Sportando.

The 25-year-old center originally signed with Washington in late December as a hardship player. He was waived in January, then rejoined the team a week later on a two-way deal. He appeared in 15 total games, with his best performance coming in the season finale against the Celtics when he scored five points and grabbed 16 rebounds. He also played 17 games for Washington’s G League affiliate, the Capital City Go-Go.

Williams, who appeared in 24 games for the Lakers last year, began the season with Maccabi Rishon LeZion in the Israel Premier League. He averaged 11.3 points and 7.8 rebounds in EuroCup play and 12.2 points plus 10.4 rebounds in the Winner League before leaving for the NBA opportunity.

11:54am: The move is official, the Wizards announced in a press release. 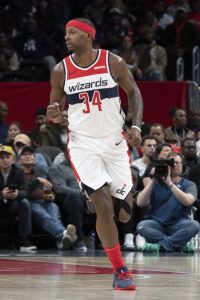 “We appreciate CJ’s contributions to our team this season and wish him and his family the best as he continues his career,” general manager Tommy Sheppard said. “He is a consummate professional who provided a great example for our younger players despite having his season cut short by an unfortunate injury.”

The team also confirmed that Pasecniks has been signed to a multi-year contract and Williams received a two-way deal.

8:12am: The Wizards will waive injured swingman C.J. Miles, tweets Candace Buckner of The Washington Post. His roster spot will be used to convert Anzejs Pasecniks‘ two-way contract to a standard deal, and Johnathan Williams will be re-signed to fill the two-way slot.

Miles, who is making $8.73MM in the final year of his contract, was acquired from the Grizzlies in a trade last summer. He played just 10 games for Washington before suffering a wrist injury in November that will sideline him for the rest of the season.

The 32-year-old has been a positive presence in the locker room, Buckner adds, but the Wizards have been dealing with a string of injuries and need more healthy players (Twitter link).

The team will keep the $4.4MM Disabled Player Exception it received in the wake of Miles’ injury, tweets Bobby Marks of ESPN. The DPE is not affected by the decision to part with Miles.

Pasecniks, a rookie center, has played 13 games for the Wizards, averaging 8.2 points and 6.2 rebounds in about 22 minutes per night. Washington waived him before training camp, then signed him to the two-way deal in December. Buckner reported last week that the team hoped to promote him to the 15-man roster.

Williams recently had a brief stint with the Wizards as a hardship player, and impressed team officials enough that they wanted to give him another chance. He averaged 5.5 PPG and 6.3 RPG in six games, starting five of them, but was waived last week when the hardship exception expired. He’ll rejoin the roster in advance of the January 15 deadline for two-way signings.

The Wizards made a pair of roster moves over the weekend, waiving Justin Robinson and Johnathan Williams, but they may not be done. According to Candace Buckner of The Washington Post, the Wizards would like to promote Anzejs Pasecniks to the 15-man roster, then sign a new two-way player in his place.

Pasecniks, a former first-round pick, began the season as a G League player with the Capital City Go-Go before signing a two-way deal with the Wizards in December. Forced into regular action due to Washington’s frontcourt injury issues, the Latvian center has held his own, with 7.7 PPG and 6.3 RPG in 11 games (21.0 MPG).

Currently, Washington has a full roster, with 15 players on standard contracts and Pasecniks and Garrison Mathews on two-way deals. While there’s not necessarily any rush to promote Pasecniks to the 15-man squad, the deadline to sign players to two-way contracts is January 15. So if the team waits until after that date, it won’t be able to sign a new two-way player to replace the big man. As such, the Wizards are likely to take action within the next eight days.

Assuming Gary Payton II isn’t released today, all 15 players on the Wizards’ standard roster will have guaranteed contracts, but that doesn’t mean one can’t be waived to make room for Pasecniks. Ian Mahinmi, C.J. Miles, Isaiah Thomas, Jordan McRae, Isaac Bonga, and Payton are among the Wizards who have no guaranteed money owed to them beyond this season and could be candidates to be traded or cut.

The Wizards were previously permitted to carry two extra players on their roster via the hardship provision, but with Davis Bertans and Thomas Bryant on the verge of returning, the club is no longer believed to qualify for an extra roster spot.

If Washington does open up a two-way slot by promoting Pasecniks, Williams is a prime candidate to return on a two-way contract of his own after being waived on Sunday, according to Buckner.

Several players around the NBA with non-guaranteed contracts have already been waived or remain in danger of being cut as this week’s salary guarantee deadline approaches. However, Heat youngsters Kendrick Nunn and Duncan Robinson have nothing to worry about.

While their contracts still aren’t technically guaranteed, Nunn and Robinson have started all season for the 26-10 Heat and will, of course, be retained through the January 7 deadline. While it’s a mere formality at this point, Nunn and Robinson are happy to assure themselves of those full guarantees, as Ira Winderman of The South Florida Sun Sentinel writes.

“It’ll definitely be a relief,” Nunn said, admitting that he had “kept an eye on” the guarantee deadline. Robinson, meanwhile, said he isn’t taking his seven-figure salary for granted.

“I hope I never get used to that or that it ever becomes normal,” he said. “Well, I guess I hope it does. Well, you know what I mean: I hope I have the perspective to appreciate that it’s not normal. Every two weeks, I just try to be appreciative of it.”

JANUARY 5: The move is official, the Wizards announced in a press release.

JANUARY 4: The Wizards will waive Johnathan Williams, tweets Candace Buckner of The Washington Post. Williams is on a non-guaranteed contract, so only a portion of his minimum salary will count against Washington’s cap.

The second-year center signed with Washington on December 26 under the hardship provision. He appeared in five games, starting four, and averaged 4.2 points and 6.0 rebounds in 18.4 minutes per night.

Williams broke into the league last season on a two-way contract with the Lakers. He also played briefly with Maccabi Rishon Le-Zion in Israel.

The Wizards had been carrying 17 players after being granted a pair of hardship exceptions. Those remain in effect only as long as the team has at least four or five players who have missed three or more games due to injury or illness and are expected to miss at least two more weeks.

Earlier in the week, it was reported that the Wizards were close to signing Johnathan Williams and according to the team, the deal is official.

As we explained in our story on Payton, the NBA can grant a team a hardship exception when that team has at least four players who have missed three or more games due to injury or illness and are expected to miss at least two more weeks. If a team has five players who fit that bill, a second additional roster spot can be granted.

Williams played with the Lakers last season on a two-way contract. Before that, the center split his college time between Missouri and Gonzaga.

As a free agent this past offseason, Williams signed with Maccabi Rishon Le-Zion, where he had averaged 12.2 PPG and 10.4 RPG in nine Israeli League games.

The Wizards are close to a deal with former Lakers two-way player Johnathan Williams, sources tell Fred Katz of The Athletic (Twitter link). However, Katz cautions that the signing won’t get done immediately.

The injury-plagued Wizards have already qualified for one extra roster spot via the hardship provision and used it today to sign Gary Payton II. Now, per Katz, they’ll apply for a second extra roster spot to accommodate Williams.

As we explained in our story on Payton, the NBA can grant a team a hardship exception when that team has at least four players who have missed three or more games due to injury or illness and are expected to miss at least two more weeks. If a team has five players who fit that bill, a second additional roster spot can be granted.

Assuming the Wizards get approval for that second extra roster spot, they’ll use it on Williams, who was a two-way player for the Lakers in 2018/19, spending most of his time with the South Bay Lakers in the G League. The young forward/center averaged 15.3 PPG and 8.4 RPG in 36 NBAGL contests (27.3 MPG), and appeared in 24 games for the NBA club, posting averages of 6.5 PPG and 4.1 RPG in 15.5 minutes per contest.

As a free agent this past offseason, Williams signed with Maccabi Rishon Le-Zion, where he had averaged 12.2 PPG and 10.4 RPG in nine Israeli League games.

The Wizards have had some success in recent years with big men who were former Lakers prospects, as Thomas Bryant and Moritz Wagner have both blossomed in Washington. Williams is unlikely to replicate their success, but could help bridge the gap for the Wizards until they start to get healthier.