5:00pm: The signing is now official, per NBA.com’s transactions log.

2:40pm: The Suns have agreed to sign free agent big man Jonah Bolden to a 10-day contract, reports Shams Charania of The Athletic (via Twitter). Phoenix has an open spot on its 15-man roster after releasing Tyler Johnson, so no corresponding roster move will be required.

However, Bolden was not part of Philadelphia’s rotation in 2019/20, appearing in just four games and logging 14 total minutes. When the Sixers decided to promote two-way player Norvel Pelle to their 15-man roster following the trade deadline, Bolden was the odd man out. He was waived last Friday and became an unrestricted free agent on Sunday.

Phoenix is currently dealing with some injuries in its frontcourt. Frank Kaminsky (knee) and Aron Baynes (hip) have been out for weeks, Dario Saric (ankle) has been ruled out for Wednesday, and Deandre Ayton (ankle) is banged up as well. As such, Bolden should get the opportunity to have an immediate role for the Suns.

Because 10-day contracts must cover at least three games, Bolden’s will run through February 22, technically making it an 11-day contract, assuming it’s officially finalized today. He’d be eligible to play against the Warriors tonight, the Raptors following the All-Star break next Friday, and the Bulls next Saturday.

After the Suns waived Tyler Johnson earlier this week, head coach Monty Williams said Johnson’s replacement on the roster will get the chance to be part of the team’s longer-term plans rather than just being a rental for the rest of the 2019/20 season, as Gina Mizell of The Athletic relays.

Word broke this afternoon that, for now, Jonah Bolden will be the player occupying the roster spot that Johnson previously held. Bolden is only getting a 10-day contract and could end up being a short-term solution as the Suns deal with a bevy of frontcourt injuries. However, if he makes a strong impression during his first few games with the team, a second 10-day contract and perhaps even a multiyear deal could follow. If not, Phoenix may look elsewhere for a player that can fit into the club’s plans beyond this season.

10:30am: The Sixers have officially waived Bolden and signed Pelle to his new contract, per Keith Pompey of The Philadelphia Inquirer (Twitter link).

10:23am: The Sixers are making a change to the back of their roster, according to Derek Bodner of The Athletic, who reports (via Twitter) that the team will waive Jonah Bolden in order to sign two-way player Norvel Pelle to a standard contract.

Bodner adds (via Twitter) that Pelle’s new contract will be a multiyear deal. This season will be fully guaranteed, and next year’s salary will become guaranteed if he remains on the roster through July 6, a source tells Bodner.

As for Bolden, the 36th overall pick in the 2017 draft fell out of Philadelphia’s rotation entirely this season, logging just 14 minutes in four games for the club. He was under contract through 2022, but his salaries for the next two years are non-guaranteed, so the Sixers won’t be on the hook for any dead money beyond this season. He’ll become an unrestricted free agent if he clears waivers on Sunday.

The 76ers won’t be able to sign a two-way player to replace Pelle, since the deadline to do so was January 15.

Kevin Love doesn’t want to see long-time teammate Tristan Thompson get traded, but he understands it might be the best move for both him and the organization, writes Chris Fedor of Cleveland.com. The Cavaliers are reportedly seeking a first-round pick in return for Thompson, who will be a free agent this summer. If Cleveland can’t find an acceptable deal, management still has interest in re-signing the 28-year-old center or possibly working out a sign-and-trade.

“That’s my brother, man,” Love said. “I would always go to war with him. I would run through a wall for him. He’s the best. Just the type of guy he is, he’s a lifelong friend of mine, so it would be tough to see him go. I would like to have him around selfishly, but if there’s a better situation out there for him, going to make him happier, have a chance to win a championship, then so be it. I only know Tristan Thompson as a Cavalier and I like it that way.”

There’s more from the Eastern Conference as the trade deadline draws nearer: 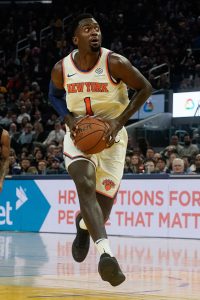 Bobby Portis, Knicks, 24, PF (Down) – Signed to a two-year, $30.75MM deal in 2019
Portis’ career appeared to be on the upswing when he posted solid numbers across the board for Chicago and Washington last season. Like many of the free agents the Knicks signed, Portis has been a colossal disappointment. His shooting percentage has dipped and he hasn’t been a force around the boards. Other than a 28-point outing against Chicago in late October, Portis has done little to justify his salary. Unless he experiences a major turnaround under new coach Mike Miller, the Knicks will decline their $15.75MM option on him after the season.

Brad Wanamaker, Celtics, 30, PG (Up) – Signed to a one-year, $1.4MM deal in 2019
Wanamaker’s role has grown in his second season with the Celtics. He’s carved out steady work, averaging 17.9 MPG while appearing in all 24 games. He doesn’t take a lot of shots but he’s above average in those categories (47.1% overall, 40% on threes, 87.5% at the free throw line). He had a 12-point, six-rebound outing against Indiana on Wednesday. Boston can make Wanamaker a restricted free agent by extending a $1.9MM qualifying offer after the season. Thus far, he has given them incentive to retain those rights.

Garrett Temple, Nets, 33, SG (Up) – Signed to a two-year, $10MM deal in 2019
The Nets made plenty of headlines during the free agent period this past summer by signing Kyrie Irving, Kevin Durant and DeAndre Jordan. Who would have guessed that during the first two months of the season, the free agent making the biggest impact would be Temple? He’s averaging 13.9 PPG, 3.9 RPG and 3.6 APG while shooting 39.7% from long range in 34.2 MPG over the past 10 games. The Nets hold a $5MM option on Temple’s contract for next season. As a valuable member of the rotation, Temple is making that decision an easy one.

Jonah Bolden, Sixers, 23, PF (Down) – Signed to a four-year, $7MM deal in 2018
Bolden appeared in 44 games in his rookie year, including 10 starts, but doesn’t have a role on this year’s team. Bolden, who has been bothered by an Achilles injury, has appeared in just two NBA games this season. He’s played eight games with the team’s G League squad, the Delaware Blue Coats, and that’s where he’ll likely spend most of his time this season unless Al Horford or Joel Embiid miss a stretch of games. Bolden’s $1.766MM salary for next season is not guaranteed and even at that modest cost, the Sixers might not keep the 2017 second-round pick around.

Stanley Johnson, Raptors, 23, SF (Down) – Signed to a two-year, $7.4MM deal in 2019
The highlight of Johnson’s disappointing NBA career came in his rookie season, when then-President Barack Obama praised his defensive effort against LeBron James in a playoff series. The eighth pick of the 2015 draft has gone from rotation player in Detroit to an afterthought with the Raptors. Currently sidelined with a groin injury, Johnson has only made five brief appearances this season. Fortunately for Johnson, he holds a player option on his $3.8MM salary for next season. At this point, it would be foolhardy for Johnson to opt out in the summer.

Here are Wednesday’s G League assignments and recalls from around the NBA:

Here are Tuesday’s G League assignments and recalls from across the NBA:

Here are Tuesday’s assignments and recalls from around the G League:

Here are Sunday’s assignments and recalls from around the NBA: