Ben Simmons feels like the Sixers are trying to force his return to the court no matter how he feels mentally, according to Shams Charania of The Athletic. Simmons met with the team’s therapist for the first time on Monday, after the team resumed fining him last week. He was previously unwilling to discuss his mental health with any team doctors.

“I truly believe the fines, the targeting, the negative publicity shined on the issue — that’s very unnecessary and has furthered the mental health issues for Ben,” Paul said. “Either you help Ben, or come out and say he’s lying. Which one is it?”

A Sixers official told Charania that the team was “absolutely not” trying to force Simmons to play, nor are they claiming that he’s lying. The team’s stance is that Simmons should participate in all Sixers activities unless the team’s therapist or Simmons’ personal specialists report that he is incapable of playing or practicing.

The official emphasized that, as of this evening, the Sixers had not been presented with information that would prevent Simmons from fully participating with the team.

Charania relays that the Sixers sent Simmons a schedule Thursday that included tonight’s game against the Raptors, which the Sixers lost 115-109. Simmons did not play in the game. The team has fined him each time this has occurred previously, so another fine could be imminent.

Paul says Simmons is open to playing for the Sixers again, but he’s not mentally ready to return to the court yet.

“In this case, we have to get Ben help and not put finances above mental health,” Paul said. “As an agent, I understand contractual obligations and I hold myself accountable in this business. But if someone is telling you something, we can no longer turn a blind eye in today’s world.

“This is no longer about a trade. This is about finding a place where we can help Ben get back to his mental strength and get back on the floor. I want him on the floor playing the game that he loves. I want Ben on the floor whether that’s in a 76ers uniform or any other uniform, that’s not up to me, but I want him in a state where he can resume play. We want to cooperate and want to work him back on the floor.”

Team officials say they’re happy to hear that Simmons is open to playing for the Sixers again, per Charania. They welcome his return to the lineup. They also insist that they’ve shown good faith through the entire process, including offering any assistance Simmons has needed.

Simmons will continue meeting with the team’s therapist and has given permission for the therapist to confidentially discuss his treatment with Simmons’ own personal specialists.

Paul says he holds no hard feelings with Sixers ownership, management, or the city of Philadelphia, he just wants what’s best for his client.

“I don’t think the 76ers are a bad organization. Josh Harris and David Blitzer are great governors, they’ve done a great job with the organization. I have respect for (president of basketball operations) Daryl Morey,” Paul said. “Ben has a mental issue, let’s support him. I’m happy he got to a place where he realized and accepted help. I understand it’s a business, but even in business, you need humanity.

“I have a great level of respect and love for the city of Philadelphia, as someone who loves the game, but this isn’t about that. This is about Ben getting back to a place mentally where he can be back on the floor — and only Ben can tell us when that is. We have to allow him to do that.”

Tyrese Maxey Denies That Reps Want Him Out Of Philadelphia

Shortly after word first surfaced in August that Ben Simmons intended to hold out this fall in an effort to force the Sixers to trade him, one report indicated that fellow guard Tyrese Maxey might be included in any Simmons trade. The thinking, according to that report, was that agent Rich Paul – who represents both Simmons and Maxey – preferred to have both his clients out of Philadelphia.

However, asked at Media Day on Monday about that rumor, Maxey denied it, telling the media that he and Paul were “sitting there laughing at it.” Maxey added that he has no desire to leave Philadelphia (Twitter link via Gina Mizell of The Philadelphia Inquirer).

“I don’t know where that came from,” he said (Twitter link via Derek Bodner of The Athletic). “… I love being here and I love the city. I can’t wait to get started.”

As we noted when we relayed that August report on Maxey, the idea that Paul had the desire and the leverage to get the 20-year-old included in a Simmons deal always seemed a little far-fetched. Maxey is entering just the second season of his four-year rookie contract and showed plenty of promise as a rookie, reducing the likelihood that the 76ers would be strong-armed into moving him.

If Simmons continues to hold out and the Sixers don’t find a trade in the short-term future, Maxey figures to take on a significantly increased role to start the 2021/22 season. Head coach Doc Rivers strongly hinted earlier today that Maxey would become Philadelphia’s starting point guard as long as Simmons remains AWOL.

With Jayson Tatum, Jaylen Brown, Robert Williams and Marcus Smart seemingly locked into starting spots for the Celtics, Chris Forsberg of NBC Sports Boston explores the possibilities for the fifth starter. The most likely candidates are Aaron Nesmith, Josh Richardson, Al Horford and Dennis Schröder — Forsberg takes a closer look at what each player could bring to the starting unit.

Bulls star Zach LaVine has made the decision to leave agencies BDA Sports and Innovate Sports, as first reported by K.C. Johnson of NBC Sports Chicago.

LaVine had been co-represented by Bill Duffy and Nima Namakian. The 26-year-old is entering the final season of a four-year, $78MM deal signed with Chicago in 2018, which means he’s set to become an unrestricted free agent after the 2021/22 campaign.

LaVine is coming off the first All-Star season of his career, averaging 27.4 points, five rebounds and 4.9 assists per game. He also shot a career-high 51% from the floor and 42% from deep during those contests.

As part of the same pitch, Paul allegedly told Noel to cut off negotiations with the Mavericks, who had offered Noel a four-year, $70MM extension, and instead sign his one-year, $4.1MM qualifying offer. After a season plagued by injury, however, his free agency proved unsuccessful, as he claims that no one from Klutch presented any ideas for how to pursue long-term contracts, and none were forthcoming on the market, leading him to sign a two-year, $3.75MM contract with the Thunder, which Noel claims was largely orchestrated by Thunder stars Russell Westbrook and Paul George, rather than by Rich Paul.

Finally, the lawsuit states that Noel learned that multiple teams, including the Sixers, Clippers, and Rockets informed him that they attempted to get in touch with Paul about offering Noel a contract, but were unable to make contact.

Noel left Klutch Sports in December of 2020, and is suing Paul and the agency for the loss of approximately $58MM stemming from the initial declined extension with Dallas. 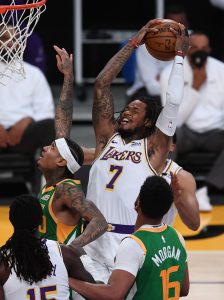 A two-year, minimum-salary deal for Lyles would work out to about $4.44MM, so it sounds like he may get something a little higher than the minimum.

Lyles has spent the last two seasons with the Spurs. He also had two-year stints in Utah and Denver. Lyles saw his playing time diminish last season, as he appeared in just 23 games. His representatives were eager to find a new home for their client, who was looking for a fresh start. He started 53 of 63 games in his first year with San Antonio.

Point guard Rokas Jokubaitis has declared for this year’s draft, Lithuanian journalist Donatas Urbonas tweets. Jokubaitis is currently ranked No. 42 on ESPN’s Best Available list. Playing for Žalgiris Kaunas of the Lithuanian Basketball League and the EuroLeague, the 20-year-old averaged 7.0 PPG and 2.5 APG in 20.9 MPG in 31 games this season.

Walker remains on his rookie contract with the Spurs. He will become eligible for a rookie scale extension in 2021 and – if he doesn’t sign a new deal early – would reach restricted free agency in 2022.