Veteran NBA guard Tim Frazier will play in Europe for the first time in his professional career, having signed a one-year contract with AEK Athens, the Greek team announced today in a press release.

Frazier, 31, went undrafted out of Penn State in 2014, but has since suited up for nine different NBA teams, appearing in a total of 289 regular season games, including 128 for New Orleans and 59 for Washington. In 2021/22, he played 10 games for the Magic and two for the Cavaliers on a series of 10-day deals.

Frazier has primarily served as a backup point guard at the NBA level, averaging 4.9 points and 4.0 assists per game with a .400/.323/.723 shooting line in 17.6 minutes per contest over the course of his eight-year career.

FEBRUARY 27: Frazier has officially signed his 10-day contract with the Cavaliers, per a team press release.

The team announced on Thursday that Caris LeVert would miss one to two weeks due to a foot sprain while All-Star Darius Garland is battling lower back soreness. Neither played in the team’s loss to Detroit Thursday night. On Friday, Rajon Rondo was diagnosed with a sprained toe that will sideline him at least two weeks.

Frazier was signed to 10-day contracts with the Magic this season under the hardship exception during the COVID crisis in late December. He wound up playing 10 games for Orlando, including three starts.

Cleveland had a roster spot available and won’t have to make a corresponding move.

After a remarkable 2021 postseason run that saw them reach the Eastern Conference Finals, the Hawks have staggered out of the gate in 2021/22. The team is off to a 16-20 start and currently occupies the conference’s No. 12 seed. Chris Kirschner and John Hollinger of The Athletic discuss several potential trades for Atlanta. Kirschner and Hollinger identify a defensive upgrade on the wing as the ideal priority for the club.

Hollinger pinpoints the expiring mid-sized deals of Lou Williams, Gorgui Dieng and Delon Wright, as well as intriguing young players such as Cam Reddish, Onyeka Okongwu and Jalen Johnson, as possible trade chips that team president Travis Schlenk could look to move. Kirschner considers the Pacers and Celtics to be amenable to making deals that could suit the Hawks’ needs.

The Hawks would be open to offloading some of their depth to add a high-impact player in a two-for-one deal, writes Sam Amick of The Athletic in another piece. Amick suggests that forwards Danilo Gallinari and Reddish may be the most likely players to be moved.

6:11pm: The Magic have re-signed both Gillespie and Frazier to their second 10-day contracts via a hardship exception, the team’s PR department tweets. Frazier has averaged 4.6 PPG, 1.8 RPG, and 3.4 APG in five games with the club (20 MPG).

7:02am: The Magic intend to sign Freddie Gillespie to a second 10-day contract using a hardship exception, our JD Shaw reports (via Twitter). Gillespie’s first 10-day deal with the club expired overnight.

The Magic’s COVID situation remains fluid — the team still has five players in the health and safety protocols, but one (Mychal Mulder) entered the protocols on December 22 and another (Mohamed Bamba) went in on Dec. 17, so hopefully they’ll be cleared soon.

There are currently two players – Hassani Gravett and Admiral Schofield – on active 10-day deals with the Magic. Gabe York reportedly reached an agreement to sign with the club, but it hasn’t been finalized yet. Tim Frazier‘s 10-day hardship contract, like Gillespie’s, expired overnight.

DECEMBER 21: The Magic have officially signed Gillespie to his 10-day deal and also announced that veteran guard Tim Frazier has been added on a 10-day contract of his own. Hardship exceptions were used to complete both moves.

DECEMBER 19: The Magic are planning to sign big man Freddie Gillespie to a 10-day contract, according to Shams Charania of The Athletic (Twitter link). Orlando will use a hardship exception to sign him.

Gillespie has been playing with the Grizzlies’ G League affiliate, averaging 11.4 points, 12.5 rebounds and 2.8 blocks per game. This is his second straight G League campaign with Memphis.

Gillespie also played 20 games with the Raptors last year, but he was waived this past fall. The 24-year-old went undrafted in 2020 after playing for Carleton and Baylor.

Veteran center Marc Gasol told reporters following his stint with the Spanish team at the Tokyo Olympics that he intends to play out the 2021/22 season with the Lakers, but NBA reporter Marc Stein (subscription required) has heard that Gasol isn’t a lock to return to the team.

Stein’s report is a little vague — it’s not clear, should the two sides part ways before the end of Gasol’s deal, whether that split would be initiated by the Lakers or by the 36-year-old big man. Stein suggests it’s also unclear whether Gasol would seek another NBA opportunity in that scenario or if he’d want to finish his playing career with a team in Spain like his brother Pau Gasol.

As we keep an eye on that situation, let’s round up a few more Lakers-related rumors and notes…

3:51pm: The team has confirmed the transaction via a press release.

3:15pm: The Grizzlies are signing reserve point guard Tim Frazier for the remainder of the season, ESPN’s Adrian Wojnarowski tweets.

Frazier’s second 10-day contract with the club expired on Friday night. He signed a 10-day with Memphis in January, then was re-signed in the middle of April.

Normally, teams can’t sign players to three 10-days in a season. Frazier would have be allowed to sign a third 10-day contract with Memphis because the first 10-day deal was completed using the team’s hardship exception and didn’t count toward the usual limit. However, the Grizzlies opted to give him a standard contract anyway.

The well-traveled Frazier has also played for the Sixers, Blazers, Pelicans, Wizards, Bucks and Pistons. He went unselected in the 2014 draft.

APRIL 14: The Grizzlies have officially signed Frazier to his 10-day deal, the team confirmed today in a press release.

APRIL 11: The Grizzlies are bringing back point guard Tim Frazier on a 10-day contract, his second of the 2020/21 season, ESPN’s Adrian Wojnarowski tweets.

Memphis previously signed Frazier to a 10-day deal in January, opting not to bring the 30-year-old back on a second contract at the time. He appeared in three games during that span and logged a total of 33 minutes.

As Bobby Marks of ESPN notes (via Twitter), Frazier will be allowed to sign a third 10-day contract with Memphis if the team so chooses. The first 10-day deal he signed was completed using the team’s hardship exception and didn’t count toward the usual limit, making this a rare possibility for each side.

The deal itself is pending health and safety protocols, according to Wojnarowski, who adds that it’ll likely be finalized this week. Frazier holds past experience with the Sixers, Blazers, Pelicans, Wizards, Bucks and Pistons. He went unselected in the 2014 draft.

Memphis currently holds the eighth-best record in the West at 26-24. The franchise is looking to make the playoffs for the first time since 2017 and doesn’t have any other vacant roster spots.

6:37pm: The signing is official, pursuant to the NBA’s hardship roster rules, according to a team press release. The Grizzlies took advantage of the league’s rule tweaks and made it a 10-day contract, according to NBA.com’s transactions log.

12:31pm: The Grizzlies are set to complete the first NBA transaction of the 2021 calendar year, with Shams Charania of The Athletic reporting (via Twitter) that the club has reached a deal to sign free agent point guard Tim Frazier.

While terms of the deal haven’t been reported, it will almost certainly be a non-guaranteed minimum-salary contract.

The Grizzlies don’t currently have an open roster spot available, but won’t have to waive a player to add Frazier, since they’ll sign him via the hardship provision, according to Charania.

The NBA can grant a team a hardship exception when that team has at least four players who have missed three or more games due to injury or illness and are expected to miss at least two more weeks. A hardship exception allows the club to add an extra player to its 15-man roster, increasing its roster limit to 16. When one of the four injured players is ready to return, the team must once again reduce its roster count to 15.

The Grizzlies have been without Jaren Jackson Jr. (knee), Justise Winslow (hip), and Jontay Porter (knee) all season so far, and recently lost Ja Morant for several weeks due to an ankle sprain. Morant missed his third consecutive game on Sunday, making Memphis eligible for a hardship exception.

9:21pm: It’s a done deal, with the Cavaliers and Pistons both issuing press releases to confirm the trade. Detroit announced in a separate release that, as expected, Frazier has been waived to make room on the roster for the incoming players. 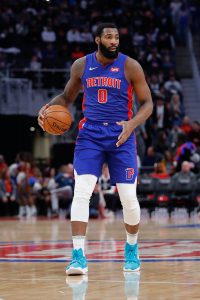 1:19pm: The Cavaliers are finalizing a trade with the Pistons that will see them acquire center Andre Drummond, a league source tells ESPN’s Adrian Wojnarowski (Twitter link).

According to Kevin O’Connor of The Ringer (via Twitter), Detroit will receive Brandon Knight and John Henson, both of whom are on expiring contracts. Cleveland will also send the Pistons a second-round pick, per O’Connor.

The pick will be the lesser of Cleveland’s 2023 own pick or the 2023 second-rounder Golden State owes the Cavaliers, Chris Fedor of Cleveland.com tweets.

Drummond, the league’s premier rebounder, holds a $28.75MM option on his contract for next season and he’s expected to opt out and test a weak free agent market. The Pistons reportedly were prepared to retain Drummond after talks with the Hawks and Knicks fell through but ultimately decided to move on and go into rebuild mode. Detroit was looking for a first-round pick for Drummond but settled on the second-rounder, along with those expiring contracts.

The modest haul for Drummond was surprising but Detroit’s front office wanted to avoid the possibility of Drummond opting in, O’Connor adds in another tweet. It also gives Cleveland the opportunity to see how Drummond meshes with the young backcourt of  Collin Sexton and Darius Garland.

The Pistons will now have approximately $35MM in cap space this summer, Bobby Marks of ESPN tweets. Cleveland will be close to the cap if Drummond opts in or re-signs with the starting salary in the $29-$30MM range, Marks adds.

Knight is making approximately $15.64MM and Henson has a $9.73MM contract, so the Pistons will shave some money off this year’s cap. They were perilously close to the luxury tax line prior to the proposed deal. Detroit was less than $4,000 under the tax line but moves to $1.7MM under the threshold via this trade, according to Marks (Twitter link).

Drummond has a $857K trade bonus that will be applied to his $27.1MM cap hit for this season, Marks relays in another tweet. Drummond, who has spent his whole career with Pistons since being chosen in the 2012 lottery, is averaging 17.8 PPG and an NBA-best 15.8 RPG this season.

The Pistons will have to open up a roster spot before making the trade official since it is at the 15-man limit. It’s likely that Tim Frazier, who has served as the No. 3 point guard behind Derrick Rose and Reggie Jackson, will be waived unless Detroit makes another trade, Vince Ellis of the Detroit Free Press tweets.