We’re just two days away from FIBA’s 2019 World Cup officially tipping off, and more national teams have officially set their 12-man rosters for the event, including a pair of countries whose squads will feature multiple NBA players.

Team Germany made its final cut this week, dropping Wizards youngster Isaac Bonga from its roster. Even without Bonga on the team, there are plenty of familiar faces for NBA fans — Dennis Schroder (Thunder), Daniel Theis (Celtics), and Maxi Kleber (Mavericks) will represent Germany in this year’s tournament.

Here are more details on teams that have established their 12-man World Cup rosters:

12:28pm: The Lakers have officially waived Yi, the team announced in a press release.

8:18am: The Lakers are currently carrying 17 players, meaning they need to make two more cuts before Monday’s regular-season roster deadline, and Yi Jianlian made one of those decisions easy. According to Marc Stein of ESPN.com, the Chinese forward has asked the Lakers to waive him, and the team will formally grant that request, waiving him in advance of today’s deadline.

As Stein details, Yi and his representatives would like the chance to pursue other opportunities after the role he envisioned in Los Angeles didn’t pan out. That could mean seeking an NBA job, but there’s a good chance the former sixth overall pick heads back overseas — he’d have better odds of earning a significant role back in China than he would with another NBA club. At this point it’s not clear which way he’s leaning, per Stein.

The contract Yi signed with the Lakers this offseason could have been worth as much as $8MM if he’d stuck with the team all season and appeared in at least 59 games. However, at this point it was only guaranteed for $250K. The rolling guarantees and incentives made it a very trade-friendly deal, which was why L.A. was believed to be leaning toward keeping Yi.

Instead, the Lakers figure to turn to Metta World Peace or Thomas Robinson for their 15th and final roster spot, with the other player joining Yi on the waiver wire. The team reportedly wouldn’t mind keeping World Peace as an assistant rather than as a player, but if he’s not willing to retire quite yet, perhaps L.A. will be using to use that final roster opening on him.

Still, as Tania Ganguli of The Los Angeles Times tweets, Robinson has “really impressed” the Lakers over the last few weeks, meaning he has a decent shot to win the roster battle. Robinson is nearly 12 years younger than World Peace, and – like Yi – was a high draft pick, having been selected fifth overall in 2012.

Yi Jianlian Not Worried About Re-Adjusting To NBA

Yi Jianlian will return to the NBA this season for the first time since the 2011/12 campaign, and while his one-year contract with the Lakers is mostly non-guaranteed and packed with incentives, the fact that it can be worth up to $8MM suggests the team believes the Chinese forward can be productive. For his part, Yi says he’s not worried about re-adjusting to the NBA after spending the last several seasons in China.

“I think I’ll have no problem with that,” Yi said, according to Baxter Holmes of ESPN.com. “I can do it.”

Of course, given Yi’s history, one could argue that it won’t be a matter of re-adjusting to the NBA — it’ll be a matter of simply adjusting, since his first stint stateside didn’t go all that well. After being selected sixth overall in the 2007 draft, the seven-footer played for four NBA teams in five seasons, averaging 7.9 PPG and 4.9 RPG with a shooting line of .404/.333/.780 in 272 career contests.

Still, Yi did show flashes of promise during his time in the NBA, averaging 12.0 PPG and 7.9 RPG with a .366 3PT% in 2009/10 for the Nets. As Holmes details, the 28-year-old believes that all of the experience he has gained playing in China for the last few seasons – and for the Chinese Olympic team – has helped him get stronger and more confident.

Yi will also face less pressure this time around, as a complementary veteran on a rebuilding club, rather than a top-10 pick viewed as the future of a franchise. According to Holmes, Yi viewed the timing as right for an NBA return, and said that joining the Lakers is a “good opportunity” for him.

The Lakers‘ contract with Yi Jianlian is very team-friendly in its structure, and could make the Chinese big man a solid trade chip this season, writes Eric Pincus of Basketball Insiders. Although he has already provided a few details on Yi’s unorthodox contract, Pincus gets a little more specific in his latest piece, writing that the new Laker will earn $2.3MM incentive bonuses when he reaches 20 games played, 40 games, and 59 games.

Because those incentives are considered “likely,” Yi currently counts for $8MM against the salary cap, but he won’t receive his full salary unless he remains on an NBA roster beyond January 10, 2017, and appears in at least 59 games. If the former lottery pick fails to make an impact early on with the Lakers, he could be traded after December 15 and before his salary becomes guaranteed in January, since his cap hit would significantly outweigh the money owed to him, and he could easily be waived.

Here are a few more contract and cap notes from Pincus:

More and more of the deals being signed by players with NBA teams as training camps approach will be non-guaranteed, minimum-salary pacts which essentially function as camp invites. However, there are still a handful of players getting a decent amount of guaranteed money in their newly-signed contracts. Eric Pincus of Basketball Insiders has updates on a few of those players, so let’s round up the details… 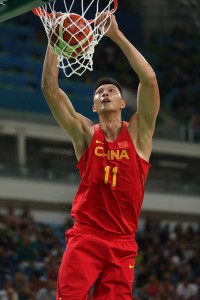 AUGUST 22: The signing is official, the team announced.

AUGUST 17, 3:55pm: The proposed deal will pay Jianlian the veteran’s minimum, but incentives could push the total value upwards of $8MM, Mike Bresnahan of The Los Angeles Times tweets.

10:41am: The Lakers and Jianlian are finalizing a one-year deal that will pay him approximately $8MM, Stein tweets.

AUGUST 16: The Lakers and Yi Jianlian are in advanced talks to bring the big man to the NBA, sources tell Marc Stein of ESPN.com (Twitter link). Eric Pincus of the Los Angeles Times notes (Twitter link) that the Lakers had representatives at the Staples Center during USA’s exhibition game against China last month.

Yi was selected by the Bucks with the No. 6 overall pick in the 2007 NBA draft. After an up-and-down rookie season, he was traded to the Nets in a deal for Richard Jefferson. The 28-year-old last played in the NBA for the Mavericks during the 2011/12 season. He averaged 2.6 points and 1.6 rebounds in just 6.8 minutes per game.

The Lakers have 14 players under contract, as the team’s depth chart at Roster Resource indicates. Yi would have competition for minutes. However, if Timofey Mozgov‘s groin injury lingers, he could possibly end up starting a few games for Los Angeles should he sign.

The Lakers have hired Jud Buechler, Brian Keefe and Theo Robertson as player development coaches, BA Turner of the Los Angeles Times tweets. Casey Owens has also been hired as an assistant coach/advance professional scout, while Will Scott has been named a video coordinator to round out Luke Walton’s staff. Brian Shaw, Jesse Mermuys and Mark Madsen had previously been named as assistants by Walton.

In other news around the Western Conference:

Six players with NBA experience participated in the Lakers’ free agent mini-camp today, tweets Eric Pincus of Basketball Insiders. Attending the camp were Xavier Henry, Jeff Ayres, P.J. Hairston, Johnny O’Bryant, Orlando Johnson and Travis Wear. A swingman, Henry played 43 games for the Lakers during 2013/14, but was waived after just nine games the following season. Ayres is a six-year veteran center/power forward who played 16 games with the Clippers last season. Hairston, a swingman, has been in the league two years with the Hornets and Grizzlies. A power forward with two years of NBA experience, O’Bryant played 66 games for the Bucks last season but was waived in June. Johnson, a shooting guard, has four years of NBA experience and had brief stops last season with the Suns and Pelicans. Wear, a small forward, was out of the league last season after playing 61 games for the Knicks in 2014/15. “What we’re looking at here are known players,” GM Mitch Kupchak said in a video on the team’s website. “We do have roster spots open in terms of our team, but also we have roster spots open in terms of training camp.”

The Lakers made a recent run at former No. 6 overall pick Yi Jianlian, who’s been playing in his native China, a source tells international journalist David Pick (Twitter link). Pick’s tweet indicates that the Lakers were unsuccessful in luring Yi from the Guangdong Southern Tigers, with whom he reportedly signed a five-year, $16.1MM extension in June. The Lakers wouldn’t have been able to sign him at that point, since NBA teams can’t ink outside free agents between the end of the regular season at the start of July.

It’s unclear what level of interest the Lakers had in the 27-year-old who hasn’t appeared in the NBA since the 2011/12 season. He’s been putting up impressive numbers for Guangdong, having averaged 27.7 points and 10.9 rebounds in 37.2 minutes per game this past season. Still, the level of competition in China isn’t particularly high. Yi’s best NBA season came in 2009/10, when he put up 12.0 PPG and 7.2 RPG in 31.8 MPG for the Nets. The Bucks originally selected him in the 2007 draft but traded him to the Nets a year later. He also appeared in the league with the Wizards and Mavs.

It doesn’t appear as though the Lakers still have any plan to go after Yi, but if they did, they could offer him only the $2.814MM room exception, which limits the team to giving out no more than a two-year deal worth $5,754,630. The composition of the team’s regular season roster is still murky, with only 12 players possessing fully guaranteed deals.

Do you think we’ll ever see Yi Jianlian in the NBA again? Comment to let us know.

Chris McCullough plans to enter this year’s draft despite tearing his ACL in January, but the player is confident he can sell NBA teams on his commitment to rehabilitating the injury, Adrian Wojnarowski of Yahoo! Sports writes. “This is the kind of injury that players come back strong from all the time in basketball now, and the process has gone good so far,” McCullough told Wojnarowski. “I’m working hard at the rehab, trying to eat the right foods. I’ll be back on the court later this year.” In 16 games for Syracuse this season, McCullough averaged 9.3 points and 6.9 rebounds in 28.1 minutes per contest.