P.J. Tucker Away From Rockets, Expected To Be Traded

Rockets forward P.J. Tucker is away from the team and there’s a belief that he has likely played his last game with Houston, head coach Stephen Silas said after Thursday’s game in Sacramento, his club’s 14th straight loss. 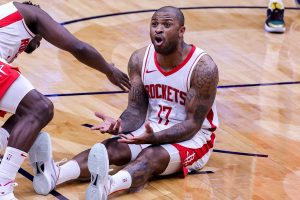 “P.J.’s not with the team,” Silas said (video link via Mark Berman of Fox 26 Houston). “He traveled here (to Sacramento), but is traveling back to Houston (instead of accompanying the team to Utah). We’re going to try to figure out something that works for him and works for us, in terms of him not being on the team anymore.

“I was under the assumption that he was going to be playing tonight, and he didn’t play. And that was disappointing. But it’s no secret that it’s been a rough year. He’s been professional… But at this point we’re going to do what’s best for the group and what’s best for P.J., and that’s probably not having him here.”

Prior to Silas’ post-game presser, ESPN’s Adrian Wojnarowski and Tim MacMahon had reported that Tucker, who is “increasingly frustrated” about not having been traded to a contending team, was a healthy scratch and that there was uncertainty about whether he’d return to the lineup at all. Silas essentially confirmed that report after the game, suggesting that both sides are on board with the divorce.

“He decided he was just not really with it, and we decided that’s a good idea — let’s move on,” Silas said, explaining why Tucker didn’t practice with the team on Wednesday and didn’t play vs. the Kings on Thursday (video link via Berman).

Unlike other players that have been pulled from their teams’ lineups in recent weeks, such as Blake Griffin, Andre Drummond, and LaMarcus Aldridge, Tucker has a very manageable expiring salary, worth just under $8MM. As such, it shouldn’t be too tricky to find a taker for him, despite the fact that he’s having a down year.

While he’s still a solid defender, the 35-year-old isn’t contributing much on offense this season, averaging a career-low 4.4 PPG with a .314 3PT% in 32 games (30.0 MPG). Tucker believes joining a contender would allow him to display his value in ways he hasn’t been able to on the struggling and rebuilding Rockets, a person familiar with his thinking told Jonathan Feigen of The Houston Chronicle.

According to Woj and MacMahon, the Rockets have engaged in several trade discussions with teams about Tucker in recent weeks, including the Bucks, Lakers, Heat, and Nets. The Sixers, Jazz, Nuggets, and Timberwolves have also been cited as clubs with potential interest in the veteran forward, as Houston seeks a young, productive rotation player.

Sources tell ESPN that the Rockets thought they were in position to sign Tucker to an extension earlier in 2020/21, having offered $17MM ($10MM guaranteed) over two seasons. However, they balked when Tucker’s camp countered with a fully guaranteed two-year, $24MM deal.

The Tucker situation is the latest unfortunate development in what’s turning into a nightmare of a season for the Rockets, who already had to deal with a prolonged push from superstar James Harden to be traded.

Houston has slumped badly with Christian Wood out due to an ankle sprain, and the club’s injury situation has gone from bad to worse within the last couple days. As Feigen details, John Wall was hit on the side of his left knee in a scrimmage on Wednesday and was ruled out for Thursday’s game, while fellow guard Eric Gordon strained his groin vs. Sacramento and will undergo an MRI (Twitter link).

38 thoughts on “P.J. Tucker Away From Rockets, Expected To Be Traded”