Former Nets wing Dzanan Musa, a first-round pick in 2018, has been named the Most Valuable Player of Liga ACB, Spain’s top basketball league, for the 2021/22 season, per an official press release.

Fans, reporters, players, and coaches vote on the award, and Musa was the top pick among all four groups, earning the maximum 100 points. Ex-NBA forward Nikola Mirotic finished fourth with 30 points.

Bucks assistant Darvin Ham will get a second interview with the Hornets for their head coaching vacancy and has become a serious candidate for the position, tweets Shams Charania of The Athletic.

Ham, 48, has been an assistant in Milwaukee since 2018 and coached under Mike Budeholzer in Atlanta as well. He is a perennial candidate for open head coaching jobs and interviewed for the Kings’ position that ultimately went to Mike Brown.

Stotts, 64, spent 10 years in Portland before he and the organization reached a mutual agreement to part ways after the end of last season. He ranks second on the Blazers’ all-time wins list with 402.

A recent Substack report by Marc Stein indicates that Mike D’Antoni, currently serving as a coaching advisor with the Pelicans, is in “a strong position” to be Charlotte’s next head coach. Even though defensive lapses were one factor that led to James Borrego‘s dismissal, the front office is seeking a veteran head coach and is intrigued by what LaMelo Ball could do as the focal point of D’Antoni’s offense.

Stein notes that D’Antoni has a strong relationship with Hornets president of basketball operations Mitch Kupchak, who previously hired him with the Lakers. Steve Bulpett of Heavy.com also identified D’Antoni as the frontrunner for the job last week.

Charlotte has cast a wide net in its search for Borrego’s replacement, with former Lakers coach Frank Vogel the most recent big name to interview. The team has also reportedly talked to Kenny Atkinson, Sean Sweeney, Charles Lee, and David Vanterpool.

You can follow all the latest coaching rumors in our head coaching search tracker.

The Bucks‘ defense performed relatively well in their second-round series vs. Boston, holding a Celtics team that led the NBA with a 122.6 offensive rating after the All-Star break to a 108.8 mark in the Eastern Conference Semifinals. However, Milwaukee’s own offense struggled — the team ranked third in the league with a 114.3 offensive rating in the regular season, but its 99.7 second-round mark ranked last by a wide margin among the eight remaining clubs.

One reason for Milwaukee’s offensive struggles was Khris Middleton‘s absence due to an MCL sprain. The Bucks were left wondering after Sunday’s Game 7 loss whether they’d be the ones advancing to face Miami in the Eastern Finals if their second-leading scorer had been available vs. Boston.

“Obviously, we weren’t trying to make excuses, ‘We don’t have Khris, and oh, it’s going to be tough for us.’ No, no, no,” Giannis Antetokounmpo said on Sunday, per Eric Nehm of The Athletic. “I think everybody went out there and competed, gave everything they had and that’s what we did from Game 3 against Chicago until Game 7 against Boston. But, if we had him, maybe it would have been a different story. But we didn’t.”

“We could’ve used him,” Jrue Holiday said of Middleton. “We definitely could’ve used him. He makes big shots and big plays on both ends, but especially the offensive end. Yeah, we missed him, but we also want him to be OK for the future, too. Yeah, he’s missed.”

Middleton confirmed on Monday that his MCL injury was a Grade 2 sprain and said it will heal on its own in the offseason without any surgical intervention (Twitter links via Eric Nehm of The Athletic and Jim Owczarski of The Milwaukee Journal Sentinel). Middleton added that he wanted to play in Games 6 and 7 vs. Boston and didn’t experience any setbacks, but team doctors said the risk was too high for him to return so soon (Twitter link via Owczarski).

Here’s more on the Bucks:

The Bucks missed an opportunity to end their series at home Friday night and they’ll have to regroup quickly as they head to Boston for Game 7, writes Eric Nehm of The Athletic. Milwaukee has already won twice on the Celtics’ home floor in the series, and Giannis Antetokounmpo said he and his teammates will have a relaxed attitude heading into Sunday’s showdown.

4:52pm: Middleton has been officially ruled out for Game 7, tweets Jim Owczarski of The Milwaukee Journal-Sentinel.

1:31pm: The Bucks are pessimistic about Khris Middleton‘s availability for Game 7 on Sunday, according to ESPN’s Brian Windhorst (hat tip to RealGM). Milwaukee originally seemed optimistic that Middleton could return, but that hope has since appeared to fade.

“Earlier this week, the folks I was talking to were giving me some optimism about Middleton playing this weekend, but that has not happened. That has not developed,” Windhorst said. “And now I would say there’s pessimism about Sunday, and frankly, I have been told that even if the Bucks advance to the conference finals, there’d be pessimism he’d be ready to start.”

Middleton suffered a Grade 2 MCL sprain in his knee during Milwaukee’s first-round series against Chicago. He was the Bucks’ second-leading scorer this season, averaging 20.1 points on 44% shooting.

Should the Bucks advance, Game 1 of the next round will be played on Tuesday. After that, Game 2 will commence on Thursday, while Game 3 would shift back to Milwaukee on Saturday.

Celtics’ Robert Williams Out For Game 6 Vs. Bucks

Celtics center Robert Williams will miss Friday’s Game 6 against the Bucks due to pain from the bone bruise in his left knee, which he suffered in Game 3, tweets Andrew Lopez of ESPN.

Williams collided with Giannis Antetokounmpo in Game 3 and later experienced swelling from the incident, which kept him out of Game 4. The swelling has subsided, but the pain from the injury has lingered, causing him to miss Game 5 and now Game 6. He’d previously been listed as questionable.

“I’m disappointed, as we all are, but looking out for his health first and foremost,” said head coach Ime Udoka, adding that Williams won’t play until he’s 100 percent (Twitter links via Jared Weiss and Jay King of The Athletic).

Williams is considered day-to-day and there’s a chance he could return for Game 7 if Boston defeats Milwaukee, per Weiss (via Twitter). The Bucks currently lead the second-round series 3-2.

Although Williams underwent left knee surgery to repair a torn meniscus at the end of March, the bone bruise is unrelated to that procedure and stems solely from what happened in Game 3.

He’s been limited by conditioning and foul trouble in some postseason games, averaging 6.2 PPG, 4.8 RPG and 1.8 BPG in five games (20.2 MPG). Still, it’s a big absence for Boston in a must-win elimination game on the road. Game 6 tips off at 6:30pm CT on ESPN.

Bobby Portis Continues To Prove Worth

UAB senior guard Jordan Walker, San Francisco senior guard Khalil Shabazz, and Auburn sophomore big man Johni Broome are among the players who have indicated that they’ll withdraw from the 2022 NBA draft class and return to college for at least one more year, according to a series of announcements.

None of the three were considered great bets to be drafted in 2022, so they’ll look to improve their stock in 2022/23 before potentially returning pro a year from now. Walker and Shabazz will have exhausted their NCAA eligibility at that point, while Broome – who recently announced that he’ll transfer to Auburn from Morehead State – will have the option of remaining in school.

Early entrants in this year’s draft have until the end of the day on June 1 to withdraw their names if they want to retain their NCAA eligibility. The NBA’s official withdrawal deadline is June 13.

Khris Middleton Making Progress, But Not Ready To Play

Hall Of Famer Bob Lanier Passes Away At Age 73

Former Pistons and Bucks big man Bob Lanier has passed away at the age of 73, per Adrian Wojnarowski of ESPN (Twitter link). A cause of death was not disclosed as of this writing. 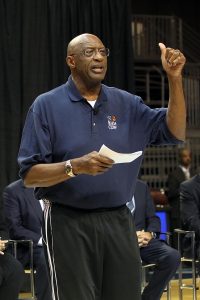 A 6’11” center, Lanier was selected with the top pick in the 1970 NBA draft by the Pistons, following three All-American seasons at St. Bonaventure. Lanier played for 10 years in Detroit before being traded in 1980 to the Bucks, where he would finish his career after the 1983/84 season.

Lanier also enjoyed an active career with the NBA long after his playing days had ceased. He served as a president for the NBPA and enjoyed an extended run as an ambassador for the league.

“For more than 30 years, Bob served as our global ambassador and as a special assistant to [former commissioner] David Stern and then me, traveling the world to teach the game’s values and make a positive impact on young people everywhere,” Silver said in part. “I learned so much from Bob by simply watching how he connected with people. He was a close friend who I will miss dearly, as will so many of his colleagues across the NBA who were inspired by his generosity.”

We at Hoops Rumors extend our deepest condolences to Lanier’s family and friends.