Speculation about the potential breakup of Donovan Mitchell and Rudy Gobert appears to be fueled more by people outside of the Jazz organization than those within it, according to Jake Fischer of Bleacher Report, who says sources from the team and around the NBA believe that CAA has been responsible for many of the whispers involving Mitchell’s future.

According to Fischer, team owner Ryan Smith is willing to spend big on a contender, and Utah has no plans to rebuild. Smith also likes the idea of having multiple players in the 2023 All-Star Game, which the Jazz will host.

Although some rival executives believe a Gobert trade is a possibility and view the Mavericks, Hawks, and Raptors as potential destinations, Fischer says the Jazz are focused on upgrading their defense, so moving a three-time Defensive Player of the Year seems counterintuitive. On the other hand, complementary players like Bojan Bogdanovic, Royce O’Neale, and perhaps even Mike Conley are considered more realistic trade candidates.

Fischer wonders if the Clippers or the Knicks might have interest in Conley, another CAA client. With the Jazz seeking help on the wing, Evan Fournier could theoretically headline a Knicks offer for Conley if they miss out on Jalen Brunson, says Fischer, though he notes that some staffers in New York would prefer to stay in-house and give Immanuel Quickley an expanded role.

As for the Clippers, Fischer is skeptical that a Conley trade offer centered around sharpshooter Luke Kennard would appeal to a Utah team looking to improve its defense and suggests that a more realistic point guard target for L.A. would be John Wall, assuming he and the Rockets work out a buyout. Wall has also been linked to the Heat, but Fischer’s sources believe Miami’s interest predated last year’s acquisition of Kyle Lowry.

MAY 8: The Clippers have confirmed that they will have extended Covington on a two-year deal, per a team announcement (Twitter link). Terms of the contract were not disclosed. 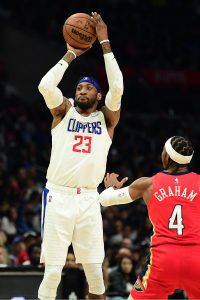 Covington was headed to unrestricted free agency this summer, but has opted to stay put rather than testing the market.

Because he was traded less than six months ago, Covington was ineligible to sign an extension longer than two years or worth more than $27.9MM prior to the start of free agency in July. His new deal fits within both of those limits.

Covington was acquired along with Norman Powell from the Trail Blazers in early February in exchange for Eric Bledsoe, Justise Winslow, rookie Keon Johnson and a 2025 second-round pick.

The Clippers were without superstar Kawhi Leonard all season and went a good chunk of the season without their other star, Paul George. Covington could play a key defensive role with the high-scoring duo back in the lineup.

In 23 games with the Clippers, Covington averaged 10.4 PPG on 50% shooting, including 45% on 3-point attempts. He had a career-high 43 points on a franchise-record 11 3-pointers against the Bucks on April 1.

Covington stated after L.A.’s play-in tournament loss to New Orleans that he was excited about the possibility of re-signing with the Clippers.

“The way that we played tonight when we went small, imagine PG and Kawhi in that lineup,” he said. “That’s a lot of versatility … Once them guys come back next year, if I’m here, I’m really looking forward to that.”

Clippers executive Lawrence Frank recently expressed interest in retaining Covington: “RoCo was very, very good for us. I’m excited to hear that he likes it here. We look forward and we’d like to be able to keep him here.”

Covington, 31, has played for Houston, Philadelphia and Minnesota as well as Portland and the Clippers.

Warriors associate head coach Mike Brown is prepared to accept the Kings head coaching job if they offer it to him, Jason Anderson of the Sacramento Bee reports.

The former Cavaliers and Lakers head coach sees Sacramento as a “good job,” according to his agent, Warren LeGarie. “Mike is willing to take the job based on the fact that he knows he’ll be supported and have a chance to win,” LeGarie said.

Brown came to Sacramento on Thursday to meet with team representatives. The two other finalists for the job, Steve Clifford and Mark Jackson, had their second interviews with the Kings earlier this week.

The job is attractive to Brown in a number of ways.

“First and foremost, he likes the people who are working there,” LeGarie said. “He loves the arena. He thinks that’s a natural resource that will help attract players because you’ve always got to have a place where the fans are involved and the facilities are terrific. And he believes the team has enough talent to give them a real solid chance of becoming a playoff contender.”

We have more Pacific Division news:

The Pelicans are aware that evening their current first-round playoff matchup against the top-seeded Suns will require them to keep their cool, writes Christian Clark of NOLA.com.

In the middle of Game 3’s second quarter, Pelicans big man Jaxson Hayes was ejected from the contest, an eventual Suns win, after aggressively pushing Phoenix forward Jae Crowder. New Orleans would go on to lose at home by a narrow margin (114-111). The Suns now have a 2-1 series edge.

Pelicans head coach Willie Green acknowledged that Hayes let his emotions get the best of him in that instance, but that the team overall has been effective at managing its emotions in a playoff environment.

“I thought we’ve done a really good job of that this series,” Green said of the Pelicans’ approach to their emotions. “We had a moment — the Jaxson-Jae Crowder thing. But other than that, it was a close game coming down the stretch, the last five minutes. They pulled away a bit. But we’re doing a lot of good. We just have to be better down the stretch.”

New Orleans will face off against the Suns in a big Game 4 today.

Speaking to reporters on Wednesday for his annual postseason press conference, Clippers president of basketball operations Lawrence Frank said the team will look to upgrade the roster this summer after a disappointing end to 2021/22, writes Mirjam Swanson of The Southern California News Group.

“We’re going to have to look at areas of improvement,” Frank said. “We want to make sure that we maximize our opportunities and be able to do something that’s never been done in the history of this organization.”

The Clippers failed to advance to the playoffs after losing both of their play-in tournament games, partly due to the season-long absence of Kawhi Leonard (ACL recovery) and Paul George‘s elbow injury (as well as his positive COVID-19 result the day of the second play-in loss). Frank said the team’s inability to win a championship with its star wings has shown “how fragile the difference between winning and losing is,” but he’ll use the playoff absence as “fuel for a great offseason,” per Swanson.

Frank said he’s encouraged by Leonard’s recovery progress, but declined to give any timetables for a potential return.