JULY 19: Gibson has officially signed with the Wizards, per NBA.com’s transactions log. 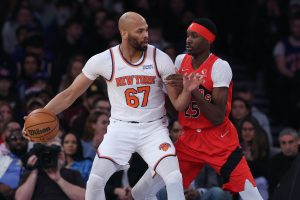 JULY 10: Gibson has cleared waivers and agreed to a one-year contract with the Wizards, his agent Mark Bartelstein tells ESPN’s Adrian Wojnarowski (Twitter link). Gibson will receive a minimum-salary deal, tweets Josh Robbins of The Athletic.

JULY 8, 4:35pm: Gibson intends to sign with the Wizards once he clears waivers, according to Shams Charania of The Athletic (Twitter link). He’ll provide Washington with some additional frontcourt depth following the free agent departure of Thomas Bryant.

Gibson, 37, appeared in 52 games for the Knicks last season, averaging 4.4 PPG and 4.4 RPG in 18.2 minutes per contest. He has long been a Tom Thibodeau favorite, having also played for the Knicks’ head coach in Chicago and Minnesota.

Gibson signed a two-year contract with the Knicks during the 2021 offseason, but his second-year salary of $5,155,500 for 2022/23 was non-guaranteed. By cutting him, New York will avoid being on the hook for any of that money.

In addition to waiving Gibson, New York has renounced Ryan Arcidiacono‘s free agent rights, according to Fred Katz of The Athletic (Twitter link). The two moves are strong signals that the Knicks intend to go under the cap in order to complete their reported signings of Jalen Brunson, Isaiah Hartenstein, and Jericho Sims, rather than remaining over the cap by acquiring Brunson via sign-and-trade.

If the Knicks had been able to turn their Alec Burks/Nerlens Noel trade with Detroit into a three-team deal involving Dallas and Brunson, they could theoretically have used their mid-level exception to sign Hartenstein and Sims, retaining a $9MM+ trade exception and the $4.1MM bi-annual exception. However, clearing cap room for their signings is the simplest path, and will leave them with the $5.4MM room exception available.

As for Gibson, there’s a chance he could re-sign with the Knicks once he clears waivers, though a few other teams have expressed interest in him, notes Ian Begley of SNY.tv (Twitter link).