The Timberwolves have waived forward Eric Paschall, per Shams Charania of The Athletic (Twitter link). The team confirmed the news in a press release.

Pachall was on a two-way deal with the Wolves, so they now have a two-way opening after releasing him. Minnesota also recently converted center Luka Garza to a two-way deal from an Exhibit 10 contract, waiving guard A.J. Lawson to make room for him.

According to Jon Krawczynski of The Athletic (Twitter link), the Wolves were “very excited” to land Paschall on a two-way deal, but it sounds like he may have been cut due to “lingering Achilles issues.” He only appeared in one preseason game for the Wolves for 13 minutes, scoring one point.

In 58 appearances last season for the Jazz, the 25-year-old averaged 5.8 PPG and 1.8 RPG on .485/.370/.767 shooting in 12.7 MPG. He was eligible for restricted free agency at season’s end, but didn’t receive a qualifying offer from Utah and became unrestricted.

It took about a month for Paschall to find a new team in free agency, and he said he contemplated retirement before ultimately accepting the two-way deal with Minnesota.

“It was just a lot, you know what I’m saying?” Paschall said. “I feel like mentally I wasn’t in the greatest place. Just tired. I was like, ‘I might just stop playing basketball.’ … You see the other players getting picked up, you’re not getting a call. You’re calling your agent every day. So I was at a point where I was like I might walk away.”

It’s unclear what the future holds for the three-year veteran, but he’ll clear waivers on Friday if he goes unclaimed.

The long process of waiting for a phone call in free agency caused Eric Paschall to consider a career change, writes Chris Hine of The Star Tribune. Paschall didn’t receive a qualifying offer after playing for Utah last season and he spent nearly a month as an unrestricted free agent before signing a two-way contract with the Timberwolves in late July.

“It was just a lot, you know what I’m saying?” Paschall said. “I feel like mentally I wasn’t in the greatest place. Just tired. I was like, ‘I might just stop playing basketball.’ … You see the other players getting picked up, you’re not getting a call. You’re calling your agent every day. So I was at a point where I was like I might walk away.”

Paschall credits former teammate Donovan Mitchell and other players with helping him stay focused on the game. Dell Demps, who joined Minnesota’s front office over the summer, was a strong advocate for signing Paschall.

“It wasn’t really the easiest decision. Had to have a lot of tough conversations about it,” Paschall said of accepting the two-way offer. “But I feel like I’m in a pretty good place now. Pretty happy that I’m here.”

The Lakers enter the season without the pressure of being one of the favorites to win the championship. Anthony Davis relishes being in that position, he told Dave McMenamin of ESPN.

“We’re treating this season like we have a chip on our shoulder. We’re the underdogs,” Davis said. “Obviously, the world is looking to see what we do. But … they’re not talking about us, and that’s fine. You know, we’d rather be under the radar.”

We have more from the Western Division:

JULY 30, 8:16am: Paschall’s two-way contract with the Timberwolves became official on Friday, per NBA.com’s transactions log.

JULY 29, 1:49pm: Paschall will be signing a two-way contract with Minnesota, according to Darren Wolfson of 5 Eyewitness News and SKOR North (Twitter link). Paschall and A.J. Lawson will occupy the Wolves’ two-way slots.

In 58 appearances last season for the Jazz, the 25-year-old averaged 5.8 PPG and 1.8 RPG on .485/.370/.767 shooting in 12.7 MPG. He was eligible for restricted free agency at season’s end, but didn’t receive a qualifying offer from Utah and became unrestricted.

Terms of Paschall’s new agreement with the Wolves aren’t known, but it may resemble the deals the club completed with free agents Austin Rivers and Nathan Knight. Both received minimum-salary contracts with partial guarantees for the 2022/23 season.

Prior to reaching a deal with Paschall, Minnesota had been carrying 12 players on guaranteed contracts, two (Rivers and Knight) with partial guarantees, and one (Jaylen Nowell) on a non-guaranteed pact, so a spot on the 15-man regular season roster shouldn’t necessarily be viewed as a lock for the newcomer. The terms of Paschall’s contract should help clarify where he stands in the Wolves’ roster hierarchy.

Utah opted not to tender a qualifying offer to Paschall in June, allowing the 25-year-old to become an unrestricted free agent. After spending his first two seasons with the Warriors, Paschall was traded to the Jazz in the 2021 offseason.

Eric Paschall, who spent last season with the Jazz but wasn’t extended a qualifying offer, thus making him an unrestricted free agent, is reportedly drawing interest from Greek club Panathinaikos, according to Johnny Askounis of Eurohoops. In reference to a tweet claiming he was “going to Europe,” Paschall said that was “false news” (Twitter link).

Of course, a team being interested in a free agent is different than a player being open to going overseas. The 6’6″ forward had a productive rookie season in 2019/20 with the Warriors as they dealt with major injuries to their stars and finished with just a 15-50 record, but has seen his role reduced significantly the past two years.

In 58 games (12.7 MPG) with Utah last season, Paschall averaged 5.8 PPG and 1.8 RPG on .485/.370/.767 shooting. Tony Jones of The Athletic reported last month that the 25-year-old was expected to draw interest on the open market — apparently that includes EuroLeague teams as well.

The 2022 offseason will be the most important of Donovan Mitchell‘s career so far, according to Tony Jones of The Athletic. As Jones writes, the Jazz‘s first-round loss to Dallas showed that Mitchell needs to become more stout defensively and must continue to improve his decision-making with the ball in his hands.

While Mitchell had another strong season in 2021/22, the Jazz will need him to take one more leap on both ends of the courts if they want to become true title contenders, says Jones, noting that the 25-year-old himself seems to recognize as much.

Here’s more out of Utah:

AUGUST 7: The trade is official, the Warriors announced in a press release. As detailed below, the deal sends Paschall to Utah in exchange for the Grizzlies’ 2026 second-round pick, which the Jazz had just acquired in a separate deal. That pick reportedly has top-42 protection. 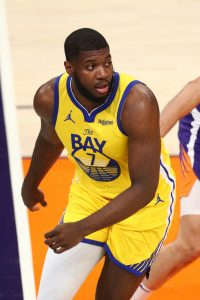 AUGUST 4: The Warriors have agreed to trade forward Eric Paschall to the Jazz in exchange for a future protected second-round pick, reports Adrian Wojnarowski of ESPN (Twitter link). That pick will be Memphis’ 2026 second-rounder, with top-42 protection, per Anthony Slater of The Athletic (Twitter link).

After a strong rookie year, Paschall’s numbers dipped a little in 2020/21 and he missed a chunk of the season due to a hip injury. Slater suggested in May that the big man’s future with the organization might be “tenuous,” and it looks like he was right. The deal will open up a roster spot and should create a small amount of tax savings for the Warriors.

Paschall will get a chance for a fresh start in Utah, providing frontcourt depth and playing alongside his close friend Donovan Mitchell. The two players grew up together in Westchester County, New York.

Paschall is technically earning the veteran’s minimum this season, but he can’t be absorbed using the minimum-salary exception because his contract was a three-year deal. Since Utah isn’t sending out any salary in the deal, the team will use one of its trade exceptions to take on Paschall’s $1.78MM salary. The exception created in last year’s Tony Bradley trade still has $2MM+ left on it and will expire soon, making it the best fit.

Tony Jones of The Athletic first identified Paschall as a Jazz trade target on Monday.