“Getting more used to that on a night-in, night-out basis, and also finishing the game, man, that’s something that I love doing,” Johnson said of his adjustment to the new responsibilities of the role. “Being in there and being part of that critical thinking on top of high-level basketball portion of the game, it’s a lot of fun.”

The Suns will be without a pair of rotation players for the rest of the preseason, the team announced today (Twitter link via Kellan Olson of Arizona Sports 98.7 FM). Cameron Johnson is out with a right thumb sprain, while Cameron Payne is dealing with a right finger sprain. Both Johnson and Payne will be reevaluated in a week, per the Suns, so it’s unclear at this point whether they’ll be ready to for the start of the regular season.

Here are a few more notes from around the Pacific:

While De’Aaron Fox, Domantas Sabonis, and Harrison Barnes are locked in as starters, two spots in the Kings‘ starting lineup remain up for grabs, head coach Mike Brown said this weekend.

Kevin Huerter started as shooting guard during the Kings’ presseason opener vs. the Lakers on Monday, while KZ Okpala got the nod at power forward. However, neither player had a big night, while Malik Monk and Keegan Murray – two other contenders for those starting spots – combined for 24 points, 12 rebounds, and three steals.

Brown won’t make any decisions based on one night, but with the start of the regular season just two weeks away, every preseason game will be an important one as the Kings consider their options.

Here are a few more notes out of Sacramento:

With the future of the Jazz uncertain following the trade of Rudy Gobert and news that the team is open to moving its other 2022 All-Star (Donovan Mitchell), 2021 Sixth Man of the Year Jordan Clarkson is keeping an even keel, writes Sarah Todd of the Deseret News.

“My vibe is always good,” Clarkson said of his attitude while dealing with the Jazz’s tenuous outlook. “This is my ninth year going into the league. I know how the business of basketball works… This is all part of what it is. But my preparation never changes and I’m going to wake up every morning and be me and do what I do. Everything is good.”

There’s more out of the West:

JULY 6: The trade is now official, according to a press release from the Hawks. Within the team’s announcement, president of basketball operations Travis Schlenk referred to Holiday and Harkless as “two defensive-minded, quality veterans who can help our team on the court and in the locker room.” 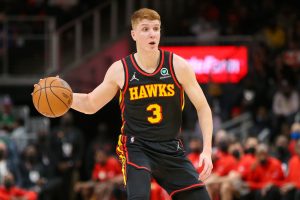 JULY 1: The Hawks and Kings have agreed to a trade that will send sharpshooter Kevin Huerter to Sacramento, sources tell ESPN’s Adrian Wojnarowski (Twitter link).

According to Wojnarowski, Atlanta will receive forwards Justin Holiday and Maurice Harkless in the deal, along with a future first-round pick.

That first-rounder will be the Kings’ own 2024 selection and will be lottery-protected, reports Chris Kirschner of The Athletic (Twitter link). If it doesn’t convey immediately, it would be top-12 protected in 2025 and top-10 protected in 2026. If it still hasn’t changed hands by that point, the Hawks would instead receive two second-rounders, says Kirschner.

The Kings have clearly made it a priority this offseason to add reliable outside shooting to complement their two stars, De’Aaron Fox and Domantas Sabonis. Huerter made a career-high 38.9% of his three-pointers in 2021/22, attempting 5.6 per game.

Neither Fox nor Sabonis is a major threat from beyond the arc, but they should be surrounded by solid floor-spaces. In addition to striking a deal for Huerter, the Kings have also drafted Keegan Murray and agreed to sign Malik Monk since the offseason began.

The Hawks, meanwhile, will replenish their stash of draft assets slightly after giving up three first-round picks and a swap to acquire Dejounte Murray earlier in the week.

Atlanta will also move off Huerter’s four-year, $65MM contract, creating a little extra long-term flexibility and also shedding some salary in the short term. As Yossi Gozlan of HoopsHype tweets, Atlanta is hovering right around the tax line for 13 players.

While the Hawks will miss Huerter’s shooting, their first-round pick, AJ Griffin, was considered one of the top marksmen in this year’s draft class and should help make up for that loss. Assuming both are retained, Holiday and Harkless also offer some defensive versatility that Huerter lacked.

The Hawks have now agreed to acquire two of the Holiday brothers today — they also reached a deal to sign point guard Aaron Holiday.

The Hawks and Danilo Gallinari have agreed to push back the forward’s salary guarantee date to July 8, reports Jake Fischer of Bleacher Report (Twitter link). Gallinari’s $21.45MM salary for 2022/23, which is currently only partially guaranteed for $5MM, was originally set to become fully guaranteed if he remained under contract through Wednesday.

However, with word breaking that he would be sent to San Antonio in a trade for Dejounte Murray, there was an expectation that Gallinari’s guarantee deadline would be moved, giving the two teams some time to complete the trade and assuring him of some extra money — it appears he’s in line to receive about an extra $6.57MM in order to ensure his guarantee is large enough to legally match Murray’s salary.

While Fischer suggests the new guarantee date opens the door for the Hawks to further expand the Murray trade before it becomes official, it will also simply ensure the Spurs and Hawks have a chance to complete the trade once the transaction moratorium ends on July 6 and that San Antonio can subsequently waive Gallinari before the rest of his salary becomes guaranteed. Assuming he’s released next week, Gallinari will have an opportunity to find a new landing spot without having to wait until later in the offseason to reach the open market.

The Hawks‘ plans for an offseason roster shakeup won’t include trading De’Andre Hunter, according to Jake Fischer of Bleacher Report.

At one time, Atlanta was thought to be willing to part with anyone except Trae Young, but Fischer reports that the team now plans keep Hunter and try to work out a contract extension. The 24-year-old small forward has dealt with injuries throughout his first three NBA seasons, but he has been a full-time starter when healthy.

The Hawks are pursuing numerous trades with the goals of finding a reliable guard to play alongside Young and creating a larger role for second-year big man Onyeka Okongwu, Fischer adds. Atlanta has been mentioned as a possible destination for Jazz center Rudy Gobert, with Clint Capela, John Collins, Kevin Huerter and the No. 16 pick in next week’s draft all considered potential trade chips.

Fischer points out that Utah CEO of basketball operations Danny Ainge has pursued a deal for Capela before. According to Fischer’s sources, when Ainge was running the Celtics in 2019, he talked to the Rockets on draft night about swapping Marcus Smart and the No. 22 pick to land Capela. The trade was agreed to in principle, but it fell through when the Grizzlies selected Houston target Brandon Clarke at No. 21.

Collins could also be an option for the Trail Blazers, who are looking to deal the seventh pick in the draft for veteran help, Fischer adds. If Atlanta acquires that pick, G League Ignite guard Dyson Daniels will likely be the target, Fischer’s sources say.

The Hawks have been seeking backcourt help for several years, Fischer adds. They tried to acquire CJ McCollum and Goran Dragic before this year’s deadline and have been involved in talks involving Zach LaVine and Bradley Beal. They also discussed a deal with the Pelicans about Jrue Holiday before he was moved to Milwaukee.

The Hawks have been identified in previous reports as a possible Rudy Gobert suitor, and multiple league sources have indicated the Jazz are interested in De’Andre Hunter, according to Matt Moore of ActionNetwork.com. Hunter is extension-eligible this offseason. However, according to Moore, the Hawks have tried to steer any teams inquiring on Hunter to players like Bogdan Bogdanovic and Kevin Huerter instead.