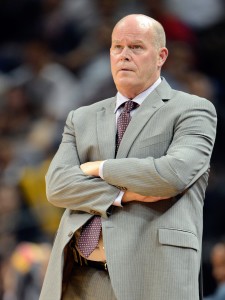 The Hornets and coach Steve Clifford have agreed to an extension with guaranteed salary through 2018/19, as the team acknowledged via Twitter and as Rick Bonnell of the Charlotte Observer originally reported. Clifford’s contract had been set to expire at season’s end. It’s unclear how much the extension is worth, but his existing deal, worth $6MM over three years, was one of the NBA’s cheapest for a head coach.

The relationship between Clifford, 54, and GM Rich Cho became chilly after the departure of former president of basketball operations Rod Higgins in 2014, sources told Zach Lowe of ESPN.com this summer, though Clifford and Cho downplayed that idea. Clifford made it clear last month that he wants to stay, and he’s guided the team to an 8-6 mark so far this season, good for seventh place in the Eastern Conference.

Charlotte missed the playoffs last season after the disastrous signing of Lance Stephenson in the summer of 2014, knocking the shine off the success Charlotte enjoyed in the 2013/14 season, its first with Clifford as head coach. That year, the then-Bobcats went to the postseason for just the second time in franchise history. It was a quick turnaround for a team that in 2011/12 finished 7-59, the worst winning percentage in NBA history.

The Heat swept Charlotte in the first round of the playoffs in the spring of 2014, and Clifford is only 84-94 in the regular season during his time in charge of the Bobcats/Hornets, who gave him his first NBA head coaching gig. He’d previously served as an assistant for the Knicks, Rockets, Magic and Lakers. He has close ties to the Van Gundy brothers, having worked under Jeff Van Gundy in New York and Houston and Stan Van Gundy in Orlando.

Do you agree with the decision to keep Clifford for the long term? Leave a comment to let us know.