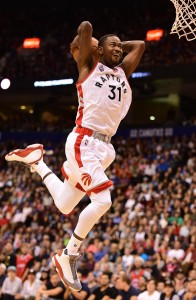 The Raptors and swingman Terrence Ross have reached an extension deal for three years and nearly $33MM, Adrian Wojnarowski of Yahoo Sports tweets. It comes closer to $10.5MM than $11MM, according to Sportsnet’s Michael Grange (on Twitter). In any case, Sam Amick of USA Today confirms the agreement (Twitter link) and the team’s media relations department later tweeted the extension was formally signed.

Raptors GM Masai Ujiri believes Ross is developing into a core player, Wojnarowski adds in a subsequent post. He started 61 games last year, averaging 9.8 points, and had a 21-point game against the Celtics on Friday.

Ross is currently serving as a backup to All-Star DeMar DeRozan and DeMarre Carroll. Ross is the second Raptors player to sign a rookie extension before the deadline, Wojnarowski notes, joining center Jonas Valanciunas, who signed a four-year, $64MM extension during the offseason.

The Raptors made a business decision to extend Ross and Valanciunas because they would have had to spend as much or more in summer to retain them, Josh Lewenberg of TSN Sports tweets.

Ross, the eighth overall pick in the 2012 draft, said this weekend that it would be “an honor” to receive an extension. The Raptors planned in July to pursue the idea, and they began talks over the summer, as Ryan Wolstat of the Toronto Sun reported.

Projecting that Ross’ salary for 2016/17 will be in the range of $10.5MM, Toronto now has more than $70MM in salary committed against a projected $89MM cap, though some executives and agents reportedly think the cap will go up to $95MM.

Is this deal better for the Raptors, better for Ross, or did they arrive at a fair number for both sides? Leave a comment to share your thoughts.