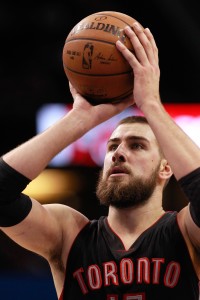 2:51pm: Valanciunas will simply see $64MM on the deal, as there are no bonuses involved, Wojnarowski clarifies (on Twitter).

2:15pm: The deal is official, the Raptors announced (Twitter link). It’s worth $64MM over four years with a player option on the fourth year, according to Adrian Wojnarowski of Yahoo! Sports (Twitter links). Bonuses could bring the total value to $70MM, Wojnarowski also indicates.

“Jonas’ contributions continue to improve with each season and we view him as a significant part of what we are building in Toronto,” Ujiri said in the team’s press release.

12:41pm: The Raptors and Jonas Valanciunas have reached agreement on an extension, reports Josh Lewenberg of TSN.ca (Twitter link). The team and the Leon Rose client had reportedly been close to a four-year, deal worth more than $60MM earlier this week as they were deeply engaged in negotiations. Valanciunas left training with the Lithuanian national team to travel to Toronto this week and undergo a medical exam, national team coach Jonas Kazlauskas said, strongly hinting that Valanciunas intended to sign a deal.

The extension comes as no surprise after GM Masai Ujiri said this past spring that Valanciunas was “a huge part of our team” for the future. Ryan Wolstat of the Toronto Sun reported in early July that the Raptors planned to work toward extensions with both Valanciunas and Terrence Ross, though the team’s brass has seemed especially high on Valanciunas, as they seemed to blame the coaching staff for slow development in the center’s game. The Raptors and head coach Dwane Casey overhauled the team’s group of assistant coaches, bringing in  Rex Kalamian, Andy Greer and Jerry Stackhouse.

A figure in excess of $60MM over four years would make Valanciunas one of the league’s most highly paid big men, far eclipsing the $12MM a year that Nikola Vucevic, a center with greater scoring production and similar defensive issues, will see on the extension he signed with the Magic this past fall. Still, Enes Kanter, another interior scorer who’s proven a liability on defense, came away with a max deal of about $70MM this summer as the economics of the NBA change in advance of the projected leaps in the salary cap. An extension for Valanciunas would take effect starting with the 2016/17 season, the first covered under the league’s $24 billion TV deal.

I’d gone in the other direction, predicting that Valanciunas would end up with $13-14MM a year when I looked at his extension candidacy earlier this month. The timing of the deal is perhaps the most surprising element, since the sides had until November 2nd to sign an extension, and most extensions for less than the maximum salary don’t come until mere days or even hours before that deadline.

The Raptors have been carrying about $45.5MM on the books for 2016/17, a figure that presumes the team will pick up the rookie scale team options on Lucas Nogueira and Bruno Caboclo. That doesn’t include any money for DeMar DeRozan, who has a $10.05MM player option that early indications show he’s likely to decline. Presuming that new deals for Valanciunas and DeRozan would add up to around $30MM, Toronto would have less than $14MM against a projected $89MM cap to use on Ross or on outside free agents.

Do you think Valanciunas is worth more than $15MM a year in this market? Leave a comment to tell us.