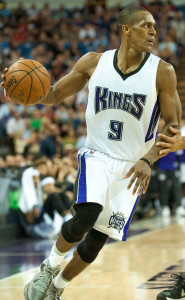 JULY 7, 1:44pm: The Bulls have issued a press release announcing their signing of Rondo.

JULY 3, 7:03pm: Rondo and the Bulls have a “mutual option” on year two of the deal, says Vincent Goodwill of CSN Chicago (Twitter link). That means either side can opt out next offseason, which presumably suggests a player option on a non-guaranteed salary.

6:17pm: The second year of Rondo’s deal is only partially guaranteed, tweets Brian Windhorst of ESPN.com.

5:57pm: Point guard Rajon Rondo has agreed to a two-year, $28MM contract with the Bulls, tweets Marc J. Spears of The Undefeated. The entire contract is guaranteed and neither side has an option, tweets Sam Amick of USA Today, who reports the deal at $30MM over two seasons.

Either way, it’s a significant raise for Rondo, who signed a one-year $9.5MM contract with the Kings last summer. He led the league in assists with 11.7 per game during his single season in Sacramento, while scoring 11.9 points a night.

“I’m excited,” Rondo said. “Great organization with pieces around me that I’m excited about.” (Twitter link).

The move brings the Bulls up to the salary floor, tweets K.C. Johnson of The Chicago Tribune, who says the team offered one- and two-year deals of all of its targets. It also raises the possibility that Jose Calderon, who was acquired in a trade with the Knicks last week, may be waived.