JULY 12: The Clippers have formally announced their deal with Speights and officially introduced him as a Clipper (Twitter link).

JULY 8: Veteran big man Marreese Speights will be moving from Western Conference contender to another, according to Adrian Wojnarowski of The Vertical, who reports that Speights has reached an agreement to sign with the Clippers. It’s a one-year deal, per Ben Bolch of The Los Angeles Times (Twitter link). 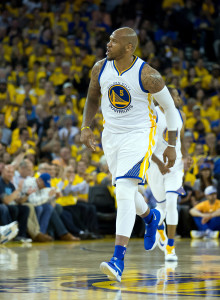 Speights, who turns 29 in August, spent the last three seasons with the Warriors, appearing in a total of 227 regular-season games – and another 41 playoff contests – for Golden State. Although Speights didn’t average more than 16 minutes per game in any of his three years with the Dubs, his production in limited action was very solid. In 11.6 minutes per game in 2015/16, the veteran big man averaged 7.1 PPG and 3.3 RPG, and even shot 38.7% from three-point range.

Having stayed over the cap to re-sign some of their own free agents, the Clippers are also using their mid-level exception on Wesley Johnson, which doesn’t leave the team with much spending flexibility. As such, it’s no surprise that Zach Lowe of ESPN.com reports (via Twitter) that Speights is signing with the Clippers for the veteran’s minimum. For a player with Speights’ experience, that will work out to a $1,403,611 salary for the 2016/17 season.

The Warriors, of course, would also have been able to offer Speights a minimum-salary deal, though it’s not entirely clear whether such an offer was on the table. If the former Florida Gator chose the Clippers over the Warriors, he’s likely seeking a bigger role — in Los Angeles, there’s an opening in the frontcourt rotation following Cole Aldrich‘s departure.