JULY 7: The Jazz have officially traded Favors to the Pelicans, according to press releases issued by both teams. 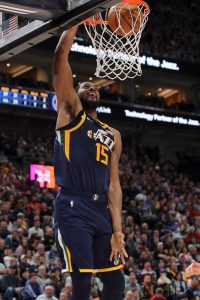 Utah’s press release features a statement from owner Gail Miller praising Favors and thanking him for his “immeasurable contributions” to the organization. Meanwhile, Pelicans head of basketball operations David Griffin said in a statement that New Orleans is “ecstatic” to acquire a “player and person of Derrick’s caliber.”

“As a selfless, 27-year old elite rim protector, with what we believe is untapped offensive potential, he is just entering his prime,” Griffin said of Favors. “We believe he will be a vital piece of our nucleus moving forward.”

JULY 1: The Pelicans will send Utah the Warriors’ 2021 and 2023 second-round picks in the swap, tweets ESPN’s Adrian Wojnarowski. New Orleans had initially acquired both picks in a draft-night deal with Golden State.

JUNE 30: The Pelicans have agreed to acquire forward Derrick Favors in a trade with the Jazz, according to Tony Jones of The Athletic (Twitter link). New Orleans will send draft picks in exchange for Favors, Jones adds.

ESPN’s Zach Lowe was first to report Utah’s desire to move Favors to New Orleans, with the two sides reaching a deal hours into the first night of free agency.

The Jazz worked to trade Favors’ contract after reaching agreement on a four-year, $73MM deal with free agent Bojan Bogdanovic earlier in the night.