7:20am: Watanabe’s second-year salary is non-guaranteed, but would become partially guaranteed for $375K if he remains under contract for three days beyond the free agency moratorium in August, reports Murphy (Twitter link). If he makes next season’s regular season roster, Watanabe would receive his full ’21/22 guarantee. 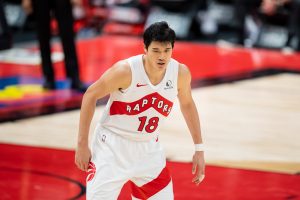 6:38am: The Raptors have elevated Yuta Watanabe to their 15-man roster, announcing today in a press release that they’ve signed the third-year forward to a standard contract.

Watanabe had spent the season on a two-way deal with Toronto, having had his Exhibit 10 contract converted before the regular season began in December. Originally considered a depth piece, the 26-year-old has become a more regular rotation fixture, appearing in 39 games for the club.

While he is valued more for his defense and his energy off the bench than his offense, Watanabe has shot the ball well this season too, averaging 4.0 PPG and 3.3 RPG on .448/.400/.826 shooting in 13.4 minutes per contest. Those numbers all exceed the ones he put up in two seasons in Memphis from 2018-20.

The exact details of Watanabe weren’t announced in the Raptors’ press release, but the team used its full mid-level exception prior to the season signing Aron Baynes and Alex Len, and didn’t have its bi-annual exception available this season. As such, we can safely assume it’s a minimum-salary deal, and Blake Murphy of The Athletic (Twitter link) confirms it covers next season as well, though it’s unclear if the 2021/22 salary is partially guaranteed or non-guaranteed.

Watanabe’s rest-of-season salary, at least, will be fully guaranteed — he’ll make $321,893 the rest of the way, in addition to what he has already earned on his two-way contract.

The Raptors now have a full 15-man roster, with 14 players on standard contracts and Freddie Gillespie on a 10-day deal. Jalen Harris is Toronto’s lone two-way player, so the club could fill its other two-way slot at some point before the regular season ends on May 16.