The Suns have signed general manager James Jones to a contract extension, he confirmed to Marc J. Spears of The Undefeated. Terms of Jones’ new contract aren’t known — Spears described it only as a multiyear deal. 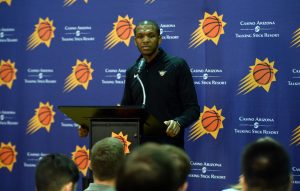 Jones initially became the Suns’ interim co-GM – alongside Trevor Bukstein – following Ryan McDonough‘s dismissal in 2018. He was given sole control of the position on a permanent basis in 2019, just two years after his retirement as a player. Since then, Jones has presided over one of the NBA’s most drastic turnarounds.

The Suns had a 19-63 record in 2018/19, but went 34-39 and then 51-21 in the league’s two COVID-shortened seasons, earning a spot in the NBA Finals in 2021 — and earning Jones an Executive of the Year award. Although they lost in six games to Milwaukee, the Suns appear well-positioned to make another run at a title this season. They currently own a league-best 37-9 record.

Several of the most important players in the Suns’ lineup – including Devin Booker, Deandre Ayton, and Mikal Bridges – were acquired by the previous front office regime. However, Jones has made a handful of key moves since taking the reins, including hiring Monty Williams as the club’s head coach.

Jones was also responsible for the 2020 trade that sent Chris Paul to the Suns, as well as the team’s signings of free agents like Cameron Payne and Jae Crowder. One of his first roster moves in 2019 was trading No. 6 overall pick Jarrett Culver to Minnesota for Dario Saric and No. 11 pick Cameron Johnson. The selection of Johnson was viewed by draft experts at the time as a reach, but both he and Saric became regular rotation players in Phoenix, while Culver lasted just two seasons with the Wolves.

Suns owner Robert Sarver is still under investigation following allegations that he created a toxic and hostile workplace. Jones, who suggested in the fall that he hadn’t witnessed the abusive behavior described in ESPN’s report, told Spears that the investigation into Sarver “didn’t give me pause” in accepting the extension offer from the team.