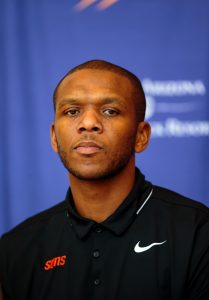 “I want to thank Robert for this opportunity,” Jones said to a raucous Phoenix home crowd, per Duane Rankin of the Arizona Republic (video link). “All I can say is ‘Go Suns, let’s win.'”

A 14-year NBA pro as a 6’8″ wing out of Miami, Jones won three titles with the Heat and Cavaliers. He first joined the Suns as the club’s vice president of basketball operations in 2017, before being promoted to interim GM in October 2018, and finally to full-fledged GM in 2019.

The award is well-deserved this season, as Jones helped orchestrate several key moves that elevated the promising young Suns into legitimate title contenders.

Jones hired head coach Monty Williams in the summer of 2019, helping lay the groundwork for the club’s turnaround from an extended lottery purgatory. The Suns just barely missed the NBA playoffs in the 2019/20 season, finishing with a 34-39 record and the No. 10 seed in the West during the Orlando restart “bubble”

Jones, 40, acquired 11-time All-Star point guard Chris Paul in a November 2020 trade with the Thunder ahead of the season, and signed savvy two-way forward Jae Crowder, hot off a Finals appearance as the Heat’s starting power forward, to a team-friendly three-year, $29.3MM deal in free agency. During the season, Jones also traded for athletic wing Torrey Craig to shore up the club’s bench depth.

This season, the Suns finished with a 51-21 record, good for the No. 2 seed in the crowded Western Conference. With the Jazz eliminated from contention, Phoenix will now enjoy home court advantage for the rest of the playoffs.

Led by Paul, homegrown superstar Devin Booker, plus promising third-year talents Mikal Bridges and Deandre Ayton (both of whom Jones had a say in selecting as VP of basketball operations), the Suns are facing the Clippers today in the first game of a best-of-seven Western Conference Finals series. Paul is currently in COVID-19 protocols, but expected to be available later in the series.