The Warriors have made a series of roster moves in advance of the regular season deadline, announcing that they’ve converted guard Ty Jerome and swingman Anthony Lamb to two-way contracts while waiving guards Jerome Robinson and Pat Spencer (Twitter links).

All four players were in training camp on Exhibit 10 contracts, which can be converted to two-way deals or can make a player eligible for a bonus worth up to $50K if he spends at least 60 days with the team’s G League affiliate. Robinson and Spencer look like candidates to take the latter route and join the Santa Cruz Warriors if they clear waivers.

Jerome and Lamb will provide depth in the Warriors’ backcourt and are eligible to play in up to 50 regular season games on their two-way deals. They’ll earn $508,891 apiece this season.

While it’s possible Golden State will sign-and-waive more players on Saturday, the team’s roster looks fairly set for the regular season. The Warriors will keep the 15th spot on their standard roster open to start the year, tweets Anthony Slater of The Athletic.

SEPTEMBER 8: The Warriors have officially announced the deal in a press release (Twitter link). It’s an Exhibit 10 contract, Hoops Rumors has confirmed.

AUGUST 31: Free agent guard Jerome Robinson will sign a training camp contract with the Warriors, according to a tweet from ESPN’s NFL insider Adam Schefter.

Robinson, 25, last played in the NBA with the Wizards during the 2020/21 season, but he only got into 17 games and saw limited playing time. Washington decided not to pick up Robinson’s fourth-year option, which would have paid him $5.34MM, and he was waived just before the end of the regular season.

Robinson was a lottery pick in 2018, having been drafted by the Clippers with the 13th selection. He was never able to carve out a role in L.A. and was sent to the Wizards in a three-team deal at the 2020 trade deadline.

He spent last season with the Warriors’ G League affiliate, so he already has a connection to the organization. He appeared in 22 games for Santa Cruz and averaged 20.2 points, 4.2 rebounds and 4.0 assists per night.

Golden State has 13 guaranteed contracts and may carry just 14 players into the regular season due to luxury tax concerns. That 14th spot will likely be reserved for Andre Iguodala, but if Iguodala retires or if the Warriors decide to carry a 15th man, there would be one available roster spot that Robinson can fight for.

9:29am: The Wizards have officially waived Robinson, the team announced today in a press release. 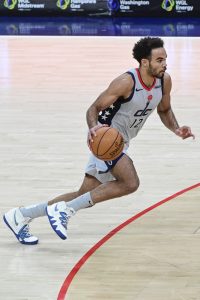 6:34am: The Wizards are making a change at the back of their 15-man roster, according to ESPN’s Adrian Wojnarowski (Twitter links), who reports that the club is waiving fourth-year wing Jerome Robinson and is expected to fill the newly-opened roster spot soon by re-signing big man Jordan Bell to a 10-day contract.

Back in December, the Wizards opted to pass on Robinson’s fourth-year option for 2021/22, which would’ve been worth $5.34MM. That was a sign that he wasn’t in Washington’s long-term plans, as was a report last month that he was among the players the team was shopping at the trade deadline.

Robinson will become an unrestricted free agent once he clears waivers, free to sign with any team, while the Wizards remain on the hook for the rest of his $3.74MM salary for 2020/21.

As for Bell, the 26-year-old inked a 10-day contract with the Wizards in January, then played for the team’s temporary NBA G League affiliate, the Erie BayHawks, at the Walt Disney World bubble. He averaged 17.6 PPG, 9.1 RPG, and 2.1 BPG in seven NBAGL contests (27.4 MPG).

A report last month suggested the Wizards were eyeing Bell for a possible two-way deal if Garrison Mathews was promoted to the 15-man roster, but it appears it’ll be Bell who ends up on the 15-man squad, albeit just on a 10-day deal for now.

While Bradley Beal remains extremely unlikely to be traded within the next nine days, that doesn’t mean the Wizards will stand pat at this month’s trade deadline. According to Fred Katz and David Aldridge of The Athletic, league sources have suggested that Washington appears open to moving young players like Troy Brown, Moritz Wagner, Jerome Robinson, and Isaac Bonga.

All of those players are between 21 and 24 years old and are on relatively inexpensive contracts, but they’ve been in and out of the rotation this season and aren’t particularly valuable trade assets. Of the four, Brown probably has the most appeal. One executive told Katz and Aldridge that the Wizrads could probably get a “second-round-equivalent asset” for the former 15th overall pick.

“My guess is an early second(-rounder) and/or a decent young player,” another executive said. “I’m sure they’d like more, but not sure those guys have much more value than that at this point.”

Here’s more on the Wizards from Katz and Aldridge:

2:56pm: Fred Katz of The Athletic confirms (via Twitter) that the Wizards are declining their fourth-year options on Robinson and Wagner.

2:52pm: The Wizards have picked up their fourth-year option on Troy Brown and their third-year option on Rui Hachimura, the team announced today in a press release.

The options apply to the 2021/22 season, fully guaranteeing each player’s salary for next year. Brown will make $5.17MM in the final year of his rookie contract, while Hachimura’s third-year option is worth $4.92MM.

Hachimura, the ninth overall pick in the 2019 draft, averaged 13.5 PPG and 6.1 RPG in 48 games (30.1 MPG) last season, earning a spot on the All-Rookie Second Team. He’s currently sidelined due to an eye issue.

Teams typically pick up all of their rookie scale options at once, so it’s worth noting that today’s announcement from the Wizards didn’t mention Jerome Robinson ($5.34MM fourth-year option) or Moritz Wagner ($3.89MM fourth-year option). Assuming those options aren’t exercised by Tuesday’s deadline, Robinson and Wagner will be on track for unrestricted free agency in 2021, and Washington won’t be able to offer them starting salaries higher than the values of their declined options.

Ensuring that Bradley Beal wants to remain in Washington was a top priority for the Wizards as they made their offseason moves, including the blockbuster trade that brought Russell Westbrook to D.C. So did the acquisition of Westbrook have an impact on Beal’s desire to stick with the team?

“Honestly, I haven’t even thought about that. I haven’t,” Beal said, per Fred Katz of The Athletic. “My biggest thing is win now, you know? I wanna win.

“I’m here under contract for this year, next year and a player option, too. So, it’s just a matter of, we gotta win. And the organization knows that. It’s up to me, too, so I can’t just sit here and … look at (general manager Tommy Sheppard) like he’s crazy. I have to go out and lead the team, put in the work and get better every day and bring the results.”

As Katz writes, the Wizards have a tricky tightrope to walk, as they focus not only on building a roster capable of long-term success, but also on winning enough in the next year or two to convince Beal that he doesn’t need to move to a new team to contend.

Heat guard Tyler Herro showed flashes of brilliance in the team’s 119-112 loss to the Suns on Saturday, Anthony Chiang of The Miami Herald writes.

Herro, who’s still in his rookie season, recorded 25 points, eight rebounds and 10 assists on 10-for-16 shooting, putting forth one of his best games this year. Despite his impressive play, Miami still lost the contest due to poor defense, injured players, and questionable rotations.

“I’m not happy with the way we’re playing,” Bam Adebayo said. “We got to get over this hump. We’re in a gray cloud that we can’t get out of. It’s my job as a leader and as a quote unquote vet to really hone in and really lead this team to a victory. Even though we have two major guys out, the next man up and I got do a better job of leading this team to victory.”

Miami has lost three of its last four games and currently owns a 2-3 record in Orlando. The Heat are slated to face the Pacers on Monday in a showdown likely featuring Jimmy Butler and T.J. Warren, with Butler telling the New York Times’ Marc Stein (Twitter link) that he’s on track to return from injury.

It’s unclear whether Goran Dragic (ankle) will be available for the contest, though he did practice on Sunday. Starting point guard Kendrick Nunn (personal) will miss the game after leaving the NBA’s campus and returning over the weekend.

Here are some more notes from the Southeast Division:

Having been one of the first NBA teams to arrive at the Walt Disney World campus on Tuesday, the Wizards announced today (via Twitter) that their quarantine period has ended and they’ll conduct their first practice later this afternoon.

However, one player who won’t participate in that practice is two-way guard Garrison Mathews. Sources tell Fred Katz of The Athletic (Twitter link) that Mathews didn’t travel to Orlando with the team for personal reasons. According to Katz, Mathews hasn’t tested positive for the coronavirus, but it remains unclear whether he’ll join the team later or miss the rest of the season.

Mathews, a rookie out of Lipscomb, appeared in just 18 games for the Wizards during the season, averaging 12.6 minutes per contest, so he wasn’t exactly an indispensable rotation piece. Still, Matthews would likely have moved up on the depth chart with Bradley Beal sidelined for the restart, so if he doesn’t eventually join the club at Disney, he’ll be missed.

Magic coach Steve Clifford was at practice with his team yesterday after a health scare Friday night in Minnesota, writes Jenny Dial Creech of The Athletic. Clifford had to leave the game against the Timberwolves in the third quarter after feeling dizzy. He was taken to a local hospital and diagnosed with dehydration.

“I’ve been sick for a few days and I realize now that I didn’t eat at all (Friday),” Clifford explained. “I started to get busy with the game and then when it was going on, I was OK. Then it just got really bad and I knew I needed to leave. Once I got on an IV at the hospital, I started to feel better.”

Health is a constant concern for the 58-year-old, who underwent heart surgery in 2013 and took a leave from coaching in 2017, citing severe exhaustion. He said he got plenty of messages from players and coaches Friday night, including a “stern lecture” from Stan Van Gundy.