League insiders have increasingly mentioned the Hornets as a team that might have interest in trading for Lakers guard Russell Westbrook, writes Marc Stein at Substack.

Charlotte would only be interested in Westbrook in order to create long-term financial flexibility, and based on salary-matching rules, the team would have to send out roughly $38MM to acquire the former MVP. Stein points to Gordon Hayward and Terry Rozier as contracts the team might want to move to accommodate a new deal for Miles Bridges this summer, plus the future max extension of LaMelo Ball.

Hayward has been very productive when healthy for Charlotte, but injuries have again been a concern. After appearing in 44 of 72 games last season, he’s played in 49 of 79 contests this season and is listed as doubtful for Thursday’s matchup with Orlando (Twitter link). Hayward will earn $30.075MM next season and $31.5MM in 2023/24.

Rozier has also been productive over the past few seasons. His four-year, $96.26MM extension starts next season, so he’ll be under contract through ’25/26.

Pairing Hayward or Rozier with Kelly Oubre could work as a framework of a deal, Stein says. He also notes that Hornets owner Michael Jordan has long admired Westbrook, although it isn’t known whether that would play a factor in a potential trade.

The Rockets remain the most logical trade partner for Westbrook due to John Wall‘s salary being a near-perfect match, but the Lakers might not find that any more palatable than they did previously, considering Houston was asking for a first-round pick, per Stein.

League sources tell Stein that the Lakers also haven’t ruled out using the waive-and-stretch provision on Westbrook’s contract, which would split his $47.06MM player option over three seasons with annual hits of $15.69MM. Going that route would take Los Angeles out of the luxury tax and make it much easier to retain Malik Monk; the team badly wants to bring him back, so it’s considered a viable possibility.

Hawks coach Nate McMillan believes enough is enough and that the NBA should pause the season, Chris Vivlamore of the Atlanta Journal-Constitution tweets. The Hawks are one of several teams dealing with major COVID-19 issues. “Of course I think that way, but it’s not up to me,” McMillan said. “The league is trying to keep this season going. Of course, it’s really frustrating for us and a lot of other teams.”

The Nuggets are expecting Austin Rivers to exit the NBA’s health and safety protocols on Tuesday, tweets Mike Singer of The Denver Post. It may take an extra day or two before Rivers is fully cleared to play, but his impeding return means Davon Reed‘s time with the team is likely done for the time being, Singer notes.

Denver signed Reed to a 10-day contract using the hardship exception on December 4. That deal will expire after Monday’s game, and with Rivers due back, the Nuggets will no longer be eligible to carry an extra player via the hardship provision.

Although Reed will likely head back to the Grand Rapids Gold – the Nuggets’ G League affiliate – he made a strong impression on the team during his time in the NBA and could be back later this season, says Singer (via Twitter).

Here are a few more COVID-related updates from around the NBA:

Hawks forward Cam Reddish, who is recovering from a wrist injury, went through a full practice on Thursday, according to coach Nate McMillan. Reddish did some shooting and participated in drills at 75% speed. He’s listed as probable to play on Friday.

Bogdan Bogdanovic still needs more time to return from his ankle injury, Sarah Spencer of the Atlanta Journal-Constitution reports in a series of tweets. “Bogi’s not doing anything other than shooting. He looks better,” McMillan said. “He’s up on his feet and he’s moving around.”

Second-year big man Onyeka Okongwu is continuing his rehab assignment from shoulder surgery. He’s with the G League College Park Skyhawks and is expected to play on Thursday.

Those players will be sidelined for at least 10 days unless they record two consecutive negative tests at least 24 hours apart. Charlotte is scheduled to play five games over the next 10 days — Sunday at Atlanta; two home games vs. Philadelphia Monday and Wednesday; another home game vs. Sacramento on Friday; and a road test against Dallas next Monday.

The team sent players and staff members home from the practice facility as a precautionary measure, ESPN’s Adrian Wojnarowski tweets. If all have tested positive, the Hornets could sign another player under the hardship exception, ESPN’s Bobby Marks tweets.

Charlotte is in the midst of a three-game losing streak but still has a winning record at 13-11. Ball had 36 points and nine assists against Milwaukee on Wednesday and is averaging 20.0 PPG, 8.3 APG and 7.7 RPG in his second NBA campaign. Rozier is the team’s third-leading scorer at 17.7 PPG, 3.6 APG and 3.5 RPG.

Until the duo returns, the Hornets will have to improvise in the backcourt with Ish Smith and Kelly Oubre likely to move into the starting lineup and Cody Martin and James Bouknight backing them up.

Plumlee has been sidelined with a calf injury since November 24 but was expected to return on Sunday. He’s averaging 6.8 PPG and 7.3 RPG as a starter. McDaniels is averaging 5.5 PPG and 3.3 RPG off the bench.

In his ongoing series of team previews, John Hollinger of The Athletic writes that the Wizards might not be a better overall team this season than they were in 2020/21, but he thinks they’re in a decent position to build around star Bradley Beal going forward.

By moving John Wall for Russell Westbrook, and then trading Westbrook to the Lakers, the Wizards acquired multiple players on smaller deals with less guaranteed money, thus gaining financial flexibility for 2022/23.

Hollinger identifies one area the team should definitely be improved: three-point shooting. The Wizards were dead last in three-point attempts per 100 possessions last season, even with renowned shooters Beal and Davis Bertans. New additions Kentavious Caldwell-Pope (.410 3PT%), Kyle Kuzma (.361), and Aaron Holiday (.368) all shot better than the Wizards’ team mark (.351) last season, and rookie Corey Kispert was considered one of the best pure shooters in the draft.

However, Hollinger thinks the team might regress defensively, as Bertans and Montrezl Harrell are both poor defenders who figure to see a good chunk of minutes together.

Hollinger projects the team to finish 38-44, 10th in the East, but thinks they’ll have their work cut out for them to actually hit that mark.

Here’s more from out of the Southeast:

Addressing a report that said Russell Westbrook helped engineer his trade to the Lakers, Wizards general manager Tommy Sheppard downplayed Westbrook’s desire to leave Washington, suggesting the point guard asked about going to the Lakers, but didn’t want to be traded just anywhere.

“I really have to make sure the record is straight on that,” Sheppard told NBC Sports Washington’s Chris Miller (link via Matt Weyirch of NBC Sports Washington). “Russell actually never asked to move on. He just said, ‘If I can get to the Lakers, that’d be something I would love to do. If not, I’ll be back here.’ I said, ‘What about the Clippers?’ He said, ‘Hell no.’ So Russell was happy being here and we were very grateful for him being here.”

While Sheppard is being diplomatic, it would’ve been interesting to see whether Westbrook was truly happy to return to the Wizards for another season if the deal with the Lakers hadn’t worked out. The Athletic’s in-depth report earlier this week suggested that Westbrook tried to convince Bradley Beal early in the offseason that both of them should ask out of Washington.

Terry Rozier sees big things ahead for the Hornets after signing his $96MM contract extension, writes Jonathan M. Alexander of The Charlotte Observer.

“Last year we were right there, had our foot in the door, but things got taken away from us due to injury,” Rozier said on Wednesday. “But I think we’re heading in the right direction and I’m just glad to be a part of this.”

Rozier, a career point guard, was moved to shooting guard after coming to Charlotte and responded with the best season of his career. He’s excited for the team’s future, especially going into year two playing alongside LaMelo Ball.

“I think it’s going to be real scary,” Rozier said. “I think it’s great that we’re friends off the court. That’s a plus for us. Real cool friends, like my brother. He just had to get his feet wet last year, and I think he’s ready to show people what that name is about.”

Rozier and team president Mitch Kupchak are also in agreement that the goal for this season is a playoff berth, and even potentially a series win.

We have more news from the Hornets:

AUGUST 24: The Hornets have officially signed Rozier to his extension, the team announced today in a press release. 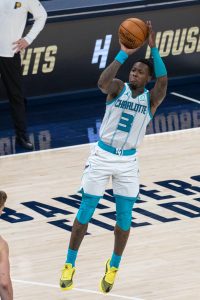 “In his two seasons with the Hornets, Terry Rozier has been an instrumental part of our team,” president of basketball operations Mitch Kupchak said in a statement. “Terry is a highly competitive, tough and talented player that has continually improved all aspects of his game. He has provided leadership and an infectious work ethic that has been a tremendous benefit to our younger players. Terry is an important member of our young, talented team and we are thrilled to have him as a member of the Hornets organization for years to come.”

Rozier has also become a reliable threat from beyond the arc, knocking down 39.6% of his 7.5 three-point attempts per game in 132 total contests for the Hornets. He shot three-pointers at a lesser rate (35.4%) on a lesser volume (3.5 attempts per game) during his four years with the Celtics.

Rozier’s play and the emergence of Rookie of the Year LaMelo Ball made the Hornets willing to part with Devonte’ Graham in free agency this summer. Rozier and Ball will lead a talented backcourt that also includes free agent addition Ish Smith and 2021 lottery pick James Bouknight.

New NBPA president CJ McCollum is unhappy with how the Heat handled Kendrick Nunn during free agency. On August 3, Miami pulled its qualifying offer for Nunn, making him an unrestricted free agent. Appearing on a podcast with Adrian Wojnarowski of ESPN, McCollum charged that the Heat made the decision after most teams with cap space had already allocated their free agent money (hat tip to Brad Sullivan of Heat Nation).

“The Kendrick Nunn situation,” McCollum said. “He was gonna be a free agent. They basically waited until the money dried up, right? You correct me if I’m wrong. Have you (Wojnarowski) seen this happening in the league and not being discussed at all? Where they talk about players forcing their way out, player movement. But then what about the manipulation that goes into some of these situations where teams are waiting for the market to dry up before they release a player’s rights.”

Nunn wound up signing a two-year, $10MM contract with the Lakers that includes a player option for the second season. L.A. used its taxpayer mid-level exception for the deal.