JULY 6: Dort’s new deal with the Thunder is now official, the team announced in a press release. 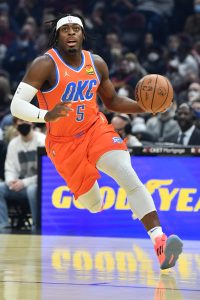 Dort’s hallmark comes on the defensive end of the court, where his strength, toughness and versatility really shine. He’s an excellent athlete with a strong frame (6’3″, 215 pounds) and is capable of switching across multiple positions.

A report last week indicated that Oklahoma City would pick up Dort’s team option for ’22/23, which would have made him an unrestricted free agent in 2023, but clearly they had a change of heart after examining the amount of salary cap space rival teams will have next summer. Instead the Thunder chose to decline the option, making him a restricted free agent.

The modern NBA is dominated by wings capable of playing both sides of the ball, so his contract aligns with the value teams place on players of his mold. Considering his trajectory and the fact that he’s only entering his fourth season, there’s a good chance that it will be a very reasonable deal for both sides for years to come.