The Wisconsin Herd, the Bucks‘ G League affiliate, has hired Chase Buford as their new head coach, per the team’s website.

“Chase has had wide-ranging basketball experiences over the past seven years, both in the G League and the NBA, and we believe he’s one of the bright young coaches in the game,” said Herd GM Dave Dean. “We are excited by his approach, fresh ideas and collaborative spirit. It’s a pleasure to welcome Chase to Wisconsin and to the Bucks family.”

Buford, who is the son of long-time Spurs executive R.C Buford, most recently was an assistant coach for the Delaware Blue Coats (the Sixers’ G League affiliate). The 30-year-old coach began his professional career back in 2012 as a regional scout with the Hawks.

According to The Associated Press, city officials in Indianapolis are signing off on a deal nearing $300MM in public subsidies in order to fund the renovation of the Pacers’ downtown arena, Bankers Life Fieldhouse.

Council members reportedly voted in favor of the deal unanimously, with the Pacers promising to stay at Bankers Life for 25 more years in consideration of the public money. The project includes building a year-round outdoor plaza next to the arena and interior updates.

The funding/renovation plan includes $270MM from the state and local income and sales taxes generated by several nearby hotels, with the city of Indianapolis committing $25MM to the project and the Pacers contributing $65MM.

There’s more news out of the Central Division this evening:

With Ricky Rubio set to become an unrestricted free agent on June 30, the Jazz could be in the market for a new starting point guard moving forward, Kincade Upstill of the Deseret News writes.

Rubio made a rather interesting comment this weekend, sharing that Utah won’t be aggressively trying to re-sign him when he reaches the open market. “Utah has already let me know I’m not a priority for them,” he said, according to Ernest Macia of Catalunya Radio.

The Jazz could pursue other available point guards in free agency such as Kyrie Irving, Kemba Walker, Malcolm Brogdon, D’Angelo Russell or Derrick Rose if the franchise mutually agrees to part ways with Rubio, who has served as the team’s starting point guard over the last two seasons. However, Jazz vice president of basketball operations Dennis Lindsey went on the record to state that Ricky could still re-sign on a new contract.

“He’s got a decision to make on his end and we’ve got a decision to make on our end, but there’s a lot of scenarios I can see Ricky back. … We really appreciate who he is and we think we can get him better from a health perspective and skill standpoint,” Lindsey said, according to Upstill. “We know who he is — he has Jazz DNA. So he’ll have options, we’ll have options and we’ll talk to him and his agent.”

Rubio’s name surfaced in rumors around this season’s February 7 trade deadline, likely causing some trust issues between him and the organization. He holds career-averages of 11.1 points, 7.7 assists and 30.9 minutes across his eight NBA seasons.

There’s more out of the Northwest Division tonight:

After being let go by Charlotte in 2018, former Hornets GM Rich Cho had been consulting work for the Grizzlies, so it made sense that new Memphis executive VP of basketball operations and former Hornets intern Zach Kleiman contacted him right away last week when a permanent, high-level position opened up in the team’s front office.

“Yeah, he reached out to me pretty quickly,” Cho said, per Peter Edmiston of The Athletic. “Zach did a really good job for us in Charlotte as an intern, he’s a really bright guy and he’s passionate about the game. He’s an extremely hard worker. I’ve watched his career progress from afar and I’m really happy the way things have gone for him, especially that he’s getting this opportunity.”

As for his new role in Memphis, Cho said that he’ll be overseeing the team’s analytics department and all of the salary cap administration. He’ll also be advising the rest of the management group on player personnel issues and acquisitions, as Edminston details. Kleiman will be running the show for the Grizzlies, so Cho is ready to do what he can to assist the 30-year-old executive.

“On a 30,000-foot level, I’ll be helping Zach out wherever he needs help, and advising him accordingly,” Cho said. “As the GM, he’s going to have to wear a lot of hats and be involved in everything, and I’m going to try to help him out wherever I can.”

Vitaly Potapenko and Greg Buckner are among the assistants named to J.B. Bickerstaff’s staff with the Grizzlies, according to a team press release. Potapenko had been the Cavaliers’ assistant director of player development since 2013, while Buckner is a holdover from last season’s staff. As previously announced, Jerry Stackhouse will also be a top assistant for Bickerstaff. Stackhouse, who coached the Raptors’ G League the past two seasons, interviewed for several head coaching jobs. Chad Forcier, an assistant under Frank Vogel with the Magic the last two seasons, has also joined the staff along with Nick Van Exel and Adam Mazarei.

In other developments around the Southwest Division:

The Grizzlies are finalizing a deal to bring Chad Forcier aboard as the lead assistant to recently appointed head coach J.B. Bickerstaff, Shams Charania of Yahoo Sports writes.

Forcier most recently spent two years with the Magic but bounced around between some formidable Pistons, Pacers and Spurs teams from 2001 to 2016. In 2014, he won a title with San Antonio.

The Magic are making a change at head coach, announcing today in a press release that they’ve parted ways with Frank Vogel. ESPN’s Adrian Wojnarowski was the first to report that Vogel has been fired. 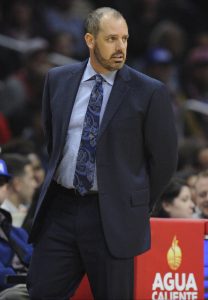 “We would like to thank Frank for his contributions to the Orlando Magic,” president of basketball operations Jeff Weltman said in a statement. “We appreciate the sacrifices he made as head coach and certainly wish him and his family well going forward.”

In addition to Vogel, lead assistant coach Chad Forcier and assistants Corliss Williamson and Jay Hernandez have also been let go by the Magic, per Josh Robbins of The Orlando Sentinel.

Like Knicks head coach Jeff Hornacek, who was also fired once the 2017/18 regular season came to an end, Vogel was hired just two years ago but found himself on the hot seat after his team overhauled its front office during the 2017 offseason. Having been brought aboard by former head of basketball operations Rob Hennigan, Vogel will be replaced by Weltman and new GM John Hammond, who will hire their own candidate in the near future.

After compiling a 250-181 record (.580) with five playoff appearances during six years as the head coach of the Pacers, Vogel was unable to replicate that success in Orlando. His team failed to reach 30 wins in either of his two seasons — overall, the Magic had a 54-110 mark (.329) during Vogel’s tenure.

The Magic will begin a search for a new head coach immediately. Previous reports have linked the franchise to various candidates with Toronto connections — Raptors assistants Nick Nurse and Rex Kalamian have been identified as possible targets for Orlando, and Raptors 905 head coach Jerry Stackhouse has been cited multiple times as a viable candidate. Weltman was the general manager in Toronto before arriving in Orlando.

The Magic are the fifth NBA team known to be seeking a permanent head coach this offseason, joining the Suns, Grizzlies, Bucks, and Knicks.

As we heard on Tuesday, the Wizards – having conceded that they’re not in the mix for Kevin Durant – have shifted their focus to Ryan Anderson, viewing him as a top free target. ESPN’s Marc Stein follows up on that report today by suggesting that Anderson isn’t the only name near the top of Washington’s wish list. According to Stein (via Twitter), the names that keep coming up as prime targets for the Wizards this offseason are Anderson, Al Horford, and Nicolas Batum.

Stein also adds (in a second tweet) that that the Wizards are expected to “quickly” enter negotiations with Bradley Beal on a new contract, after extending him a qualifying offer to make him a restricted free agent. That echoes a May report, which indicated the Wizards won’t waste time in offering Beal a long-term, maximum-salary contract when the new league year opens.

Here’s more from around the Southeast division:

The Nets won’t necessarily be gunning for the top players in the free agent market this summer, but instead, will be seeking players with high character and a strong work ethic who are on the verge of breaking out, Mike Mazzeo of ESPN.com relays (ESPN Now link). “I think veteran leadership is important,” coach Kenny Atkinson said regarding what kind of players the team would be targeting. “I think undervalued guys, guys that might be under the radar and can produce and maybe not necessarily the big star, maybe we’re not in position to get that guy and really guys like Isaiah Whitehead that fill the characteristics we’re looking for — hardworking, high character, high basketball IQ is important for us and competitors.”

Hornets GM Rich Cho, speaking at a pre-draft press conference on Friday, told reporters that the team is likely to draft the best available player and would not target a specific need given the large amount of the roster set to hit free agency, Rick Bonnell of The Charlotte Observer writes. “With eight free agents, I don’t know what’s going to happen, so we’re just trying to get more depth,” Cho said. “[Need] is a hard question to answer because we have so many free agents and don’t know how it’s going to play out.” The executive also reiterated that the team’s top offseason priority is re-signing unrestricted free agent swingman Nicolas Batum, Bonnell adds. “We hope to meet with him as soon as free agency starts,” Cho said of Batum. “Our goal is to get something done with him.”

Here’s more from the Southeast Division: