The Nets are awaiting the results of an MRI on LaMarcus Aldridge‘s left ankle, according to Brian Lewis of the New York Post. Aldridge sprained the ankle during the fourth quarter of Saturday’s loss at Golden State. He left the arena in a walking boot and had the MRI in Arizona. Aldridge is averaging 13.4 PPG and 5.6 RPG in 22.9 MPG.

We have more news on the Nets:

Suns coach Monty Williams and his staff will coach Team LeBron (James) at the All-Star Game in Cleveland, according to an ESPN report. Phoenix is guaranteed to have the best record in the conference before the cutoff date of February 6. Williams will coach in the All-Star Game for the first time, and he’ll be the first Phoenix head coach to do so since Mike D’Antoni in 2007.

Bucks swingman Donte DiVincenzo has heard his name in trade rumors but he’s not fretting over it, as he told Eric Nehm of The Athletic. DiVincenzo hopes to remain in Milwaukee this season.

“What can you focus on? What can you control? I can control my attitude and my effort every day,” DiVincenzo said. “And those are two things that no matter what, the business side is going to handle itself, I can control the attitude and effort. And if a trade happens? I went through a trade! I experienced that. I’m cool. I want to be here.”

DiVincenzo wasn’t signed to a rookie scale extension during the offseason. He’ll be a restricted free agent this summer.

“I’m not one to focus on what’s four or five months ahead of me,” he said. “If you sit down and focus on coming in every day and focus on what do I have to do today and get better today? Everything else takes care of itself.”

Keita Bates-Diop is out of the league’s health and safety protocols, Tom Orsborn of the San Antonio Express News tweets. The Spurs forward, who has missed four games, is no longer on the team’s injury report. San Antonio plays Golden State on Tuesday.

Pacers center Domantas Sabonis has entered the NBA’s health and safety protocols and will miss Monday’s game vs. the Clippers, the team announced today (Twitter link).

If he registered a false positive or inconclusive test result, Sabonis could clear the protocols quickly. But if he tested positive for COVID-19, the big man figures to be sidelined for at least five or six days unless he can return two consecutive negative tests at least 24 hours apart before then.

Sabonis, who recently missed four games due to an ankle sprain, had been terrific since returning, averaging 22.5 PPG, 16.5 RPG, 9.0 APG, and 1.5 BPG on 65.4% shooting in games in Oklahoma City and Dallas on Friday and Saturday.

With Sabonis unavailable, the Pacers could find themselves pretty shorthanded up front. Myles Turner (left foot) is also out, while Goga Bitadze (right foot) is questionable to play. As James Boyd of The Indianapolis Star writes, rookies Isaiah Jackson and Terry Taylor should be in line for larger roles, especially if Bitadze is ruled out.

As our tracker shows, Sabonis one of just seven players currently in the health and safety protocols, with the league’s COVID-19 situation looking a lot better than it did a month ago.

The Nuggets have received a disabled player exception as a result of Michael Porter Jr.‘s back surgery, reports Shams Charania of The Athletic (Twitter link). The exception is worth $2,629,368, half of Porter’s $5,258,735 salary.

A salary cap exception designed to give teams extra flexibility when a player suffers a major injury, the disabled player exception can be used to sign a free agent, to claim a player off waivers, or to acquire a player in a trade. The exception can only be used on a single player and can only accommodate a player on a one-year deal. A free agent signee can’t get a multiyear contract, and any trade or waiver target must be in the final year of his contract.

Although the disabled player exception gives a team extra cap flexibility, it doesn’t open up an extra spot on the 15-man roster. The club must have a roster spot available to use the DPE to add a player.

The fact that Denver has been granted a disabled player exception related to Porter’s injury is interesting, since multiple reports this month have suggested the forward could make his return this spring.

The Nuggets receiving a DPE doesn’t mean that Porter can’t return this season. However, it does mean an NBA-designated physician determined he’s more likely than not to be sidelined through June 15. That suggests Denver’s medical staff may be more bullish about Porter’s recovery timeline than an independent doctor is.

Besides the Nuggets, the Cavaliers ($8.9MM) and Pelicans ($1.9MM) have also been granted disabled player exceptions this season for season-ending injuries to Ricky Rubio and Kira Lewis, respectively.

Suns guard Chris Paul and Sixers center Joel Embiid have been named the Players of the Week for the Western Conference and Eastern Conference, respectively, the NBA announced today (via Twitter).

The 76ers, meanwhile, enjoyed a 3-0 week, with their star center leading the way. Embiid put up 34.7 PPG, 11.7 RPG, and 5.7 APG in victories over over the Pelicans, Lakers, and Kings. He’ll get a breather following his big week, sitting out Monday’s game vs. Memphis for rest purposes. It’ll be the first game he has missed since December 13.

Both Paul and Embiid would likely show up on plenty of MVP ballots if the season ended today, so it’s a little surprising that neither star had won a Player of the Week award yet this season. Embiid was named the East’s Player of the Month for December.

Devin Booker, Jaren Jackson Jr., Ja Morant, Nikola Jokic, and Karl-Anthony Towns were this week’s other nominees in the West, while Jimmy Butler, Darius Garland, Jayson Tatum, Franz Wagner, and Trae Young received consideration in the East, according to the league (Twitter link).

Joe Ingles Out For Season With Torn ACL

Jazz forward Joe Ingles has been diagnosed with a torn left ACL, according to Adrian Wojnarowski of ESPN, who reports (via Twitter) that Ingles will miss the rest of the 2021/22 season. 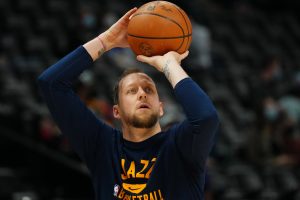 The plan is for Ingles to undergo surgery to repair the ACL tear within the next few weeks, once he gets a range of motion back in his knee, sources tell Wojnarowski (Twitter links).

Ingles’ injury is a tough blow to a slumping squad that is already dealing with a series of other injuries. Donovan Mitchell has been in the concussion protocol for two weeks, having last played on January 17, while Rudy Gobert has missed Utah’s last four games due to a calf ailment. After starting the season with a 28-10 record, the Jazz have lost 11 of their last 13 games, including five in a row.

Mitchell’s and Gobert’s injuries, at least, aren’t considered long-term issues, but the Jazz will need to find a way to make up Ingles’ production. In the short term, forwards like Bojan Bogdanovic, Royce O’Neale, and Rudy Gay will be leaned on more heavily.

Because he’s in the last year of his contract and has had an up-and-down season, Ingles had been viewed as a potential trade candidate for a Utah team seeking an upgrade on the wing. The 34-year-old and his $13MM expiring deal seem even more likely to be moved now. Like the Cavs have done with Ricky Rubio since he suffered an ACL tear of his own, the Jazz will probably shop Ingles with a draft pick in the hopes of acquiring a player who can help the club contend this season.

The Jazz won’t be able to apply for a disabled player exception in response to Ingles’ injury, since the deadline to submit a DPE request was January 15.

Although Jalen Brunson and Dorian Finney-Smith have been frequently mentioned in trade rumors within the last few weeks, Marc Stein says in his latest Substack article that the safe money is on both players remaining with the Mavericks through the February 10 trade deadline.

Dallas has rebuffed trade interest in Brunson and Finney-Smith so far, according to Stein, who notes that both players are important parts of the team’s current roster. Discussing Brunson specifically, Stein says the Mavs believe the point guard wants to stick with the team long-term and haven’t considered the idea of sending him to the Knicks in a deal that would allow them to reacquire their 2023 first-round pick.

While the Mavs would ideally like to extend both Brunson and Finney-Smith before they reach unrestricted free agency this summer, it’s unclear if either player will be interested in a four-year, $55.6MM deal, which is the most Dallas can offer at this point. A previous report stated that Finney-Smith may be seeking $15MM+ annually on his next contract, and Stein says Brunson is believed to after $18MM+ per year.