Former Mavericks swingman Ryan Broekhoff has re-signed with South East Melbourne Phoenix in Australia’s NBL for two years, according to an NBL press release. Broekhoff played for the Phoenix this past season. He withdrew from playing in this summer’s Olympics with the Australian national team in order to focus on mental health issues.

David Fizdale turned down more money from the Pacers to be one of Rick Carlisle’s lead assistants in order to take a similar job with the Lakers, according to Marc Spears of The Undefeated (Twitter link). Indiana’s interest in Fizdale was previously reported. Former Warriors assistant coach Jarron Collins is being considered for an assistant coaching position with the Pacers, Spears adds.

We have more on the Pacers;

Leonard hasn’t played in the series against the Suns due to a right knee injury that he suffered June 14 against Utah. Zubac is also sidelined by a right knee injury, officially described as an MCL sprain. The 24-year-old center played regularly during the first four games of the series, averaging 12.8 PPG and 11.0 RPG.

Marcus Morris is also dealing with a knee injury but he’ll play, according to coach Tyronn Lue, Ohm Youngmisuk of ESPN tweets.

With Zubac sidelined in Game 5, Lue went with a smaller lineup and his team staved off elimination with a 116-102 win. Guards Terance Mann and Patrick Beverley were inserted into the lineup with Morris and Paul George as the only natural forwards.

Drafting Evan Mobley with the No. 3 pick wouldn’t necessarily mean the Cavaliers would let restricted free agent Jarrett Allen walk, Chris Fedor of the Cleveland Plain Dealer writes. The USC big man is widely considered one of the top four prospects in the draft, and sources tell Fedor the Cavs believe he could thrive at the four or the five, so he should be able to share the frontcourt with a center like Allen. Mobley could also slide over to the middle in some lineups, and his versatility would provide head coach J.B. Bickerstaff with more flexibility.

Young missed Game 4 on Tuesday with a right foot bone bruise, so the questionable tag should give Hawks fans some hope he’ll return to action in the pivotal game of the series. Atlanta’s 110-88 victory in Game 4 knotted the series at 2-2.

Capela is dealing with right eye inflammation. He caught an elbow from Bucks guard Sam Merrill in the late going, Tim Bontemps of ESPN tweets. He contributed 15 points and seven rebounds in 28 minutes during Game 4.

The Bucks are likely to be without their star. Giannis Antetokounmpo is listed as doubtful after suffering a hyperextension of his left knee in Game 4. An MRI revealed no structural damage.

Giannis Has No Structural Damage In Knee, Doubtful For Game 5

4:02pm: Antetokounmpo has been listed as doubtful for Game 5, according to the Bucks (Twitter link). The team added in a press release that today’s MRI on Giannis’ knee confirmed the original diagnosis of a hyperextension.

That’s great news for the Bucks and Antetokounmpo, who was diagnosed with a hyperextended left knee after falling awkwardly during Game 4 on Tuesday. However, the two-time MVP’s timetable to return remains unclear, per Lowe and Wojnarowski.

Both Antetokounmpo and Hawks star Trae Young are dealing with injuries and haven’t yet been cleared to play in Game 5 of the Eastern Conference Finals on Thursday. We should learn more about their respective statuses either later today or early tomorrow.

The Bucks, who are already down one starter (Donte DiVincenzo), will have to lean more heavily on stars Khris Middleton and Jrue Holiday if Giannis is unable to play on Thursday in Milwaukee. Brook Lopez and/or Bobby Portis could also be asked to play a larger role in the frontcourt.

After missing the postseason for the first time in 23 years in 2019/20, the Spurs didn’t exactly bounce back with a vengeance in ’20/21. Their 33-39 record was just a half-game improvement over the year before, and while San Antonio earned a spot in the play-in tournament, the team was quickly eliminated by Memphis, missing the playoffs two years in a row for the first time in franchise history. 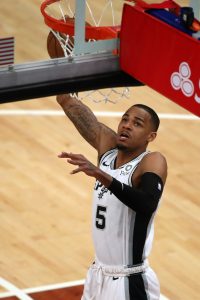 San Antonio’s struggles can be traced back to an inability to maximize the return for All-NBA forward Kawhi Leonard in 2018. That wasn’t entirely the team’s fault – Leonard’s injury situation and his discontent with the organization hurt his value – but it was a problem.

The Spurs haven’t been bad enough in recent years to land high in the lottery and potentially draft a new franchise player. As a result, the club that went from David Robinson to Tim Duncan to Leonard now lacks a cornerstone for its next phase.

Still, given where the Spurs have drafted in recent years, there’s plenty of promising young talent on the roster, including Dejounte Murray, Derrick White, Keldon Johnson, Lonnie Walker, and Devin Vassell, so it’s not as if the cupboards are totally bare going forward. San Antonio still has one of the league’s better developmental programs, and as long as those youngsters continue to improve, it shouldn’t be much longer until the team is back in the postseason.

With the exception of the occasional major move – such as the Leonard trade in 2018 or the signing of LaMarcus Aldridge in 2015 – the Spurs can rarely be counted on for action-packed offseasons that feature a bunch of roster turnover. Their general preference is to identify guys they like and then to keep re-signing them, favoring continuity and development over constantly seeking out potential upgrades.

Having said that, if the Spurs do want to significantly turn over their roster, this would be the time to do it. Aldridge departed earlier this year, highly-paid veterans DeMar DeRozan, Rudy Gay, and Patty Mills are among the team’s five unrestricted free agents, and the club currently has less than $57MM in guaranteed salary on its books for 2021/22.

While the opportunity is there, I wouldn’t expect the Spurs to renounce all their vets to create the cap room necessary to make a run for a top restricted free agent such as John Collins. They could surprise me, but it just doesn’t feel like their M.O.

There are rumors that DeRozan may look to sign elsewhere, however. In that case, perhaps the Spurs focus on re-signing Mills and Gay. If the team can bring back that duo for a combined 2021/22 cap hit of about $25-30MM, it would still leave enough room to make a play at a second- or third-tier free agent or two.

Lauri Markkanen would be an intriguing target as a reclamation project, since the former lottery pick has seen his value dip a little in Chicago. Josh Hart and Bruce Brown also strike me as Spurs-type players.

However, all of those guys are restricted free agents, so San Antonio would either have to be aggressive with an offer sheet, work out a sign-and-trade, or hope that the player’s current team is only lukewarm on bringing him back. That may be the case with Markkanen and the Bulls, but I imagine the Pelicans and Nets will prioritize Hart and Brown, respectively.

Kelly Olynyk, Otto Porter, JaMychal Green, and Kelly Oubre are among the unrestricted free agents I could envision as fits for the Spurs. Justise Winslow might also be an intriguing target if the Grizzlies don’t pick up his $13MM option.

Of course, the big question looming over the Spurs is how much longer Gregg Popovich will patrol the team’s sidelines. A year or two ago, there was speculation that the NBA’s longest-tenured head coach would retire after coaching Team USA at the 2020 Olympics. The Tokyo games have since been pushed back a year and there’s still no indication that Popovich plans to call it career once they conclude. But he’s 72 years old, so it’s hard to imagine his run as the Spurs’ coach will last too much longer.

Taking into account the cap hold for their lottery pick, the Spurs have about $61MM committed to nine roster spots, putting them in position to open up a serious chunk of cap room. However, they also have nearly double that amount in options, non-guaranteed salary, and free agent cap holds, meaning they could very well operate as an over-the-cap team to start the offseason.

The Spurs’ decision on DeRozan may dictate whether or not they dip below the cap. If he re-signs at a salary close to this season’s $27.7MM figure, staying over the cap probably makes sense, but if he walks for nothing, the club might as well take advantage of its financial flexibility.

A new name has surfaced in the Pelicans‘ head coaching search, according to Jake Fischer of Bleacher Report, who says (via Twitter) that Suns assistant Willie Green is a candidate for the top job in New Orleans. While Fischer doesn’t specify whether the Pelicans have already talked to Green or have a meeting lined up with him, he reports that the former NBA wing has interviewed with both the Magic and Wizards, and made strong impression on both clubs.

Justin Bean (Utah State), Eric Ayala (Maryland), Jeenathan Williams (Buffalo), Latrell Jones (Portland), Quentin Scott (Texas State), and De’Vion Harmon (Oklahoma) are all withdrawing from the 2021 NBA draft after testing the waters as early entrants, according to a series of reports from Jon Rothstein of CBS Sports and Jeff Goodman of Stadium (all six links go to Twitter).

Of those six players, three will transfer, with Jones heading to Nicholls State, Scott making the move to Tulane, and Harmon going to Oregon.

Here’s more on the draft:

12:28pm: The Wizards are continuing through their first round of head coaching interviews this week, according to Michael Scotto of HoopsHype, who hears that the team could move onto the next stage of the process by the end of the week.

An earlier report indicated that Washington’s search for Scott Brooks‘ replacement will be “lengthy and thorough.” Only a handful of candidates have been reported so far, but Scotto adds a couple more names to that list.

According to Scotto, Hornets assistant Ronald Nored and Heat assistant Chris Quinn are receiving consideration from the Wizards and were in the mix for the team’s first round of interviews.

Nored, who played for Butler from 2008-12 and coached the Long Island Nets from 2016-18, is also drawing interest from the Pacers as a possible assistant on Rick Carlisle‘s staff, Scotto adds. Quinn, meanwhile, has been a member of Erik Spoelstra‘s staff in Miami since 2014 and reportedly interviewed for Indiana’s head coaching job in 2020.

Nored and Quinn join a group of candidates that includes Wes Unseld Jr., Scott Morrison, Jamahl Mosley, and Sam Cassell. As we relayed earlier today, Cassell interviewed with the Wizards on Tuesday.