The right quadriceps injury that might keep Kawhi Leonard sidelined through the preseason is a carryover from last season, writes Melissa Rohlin of The San Antonio Express-News. The Spurs issued a press release today explaining that Leonard is in a rehab program for quadriceps tendinopathy, with coach Gregg Popovich noting that the All-Star forward’s recovery has gone slower than anticipated. He added that it is not related to the ankle injury Leonard suffered in the playoffs.

Although the team isn’t sure when Leonard might be ready, Popovich offered hope that he might be back before the regular season starts. “They are still rehabbing his thigh,” the coach said. “He will probably miss the beginning of preseason or a good deal of preseason. We are not going to put a timetable on it. But he is working on it, and we will get him back as soon as we can.”

Thunder GM Sam Presti wrapped up an incredible offseason this week when Russell Westbrook signed a five-year, $205MM extension that ensures the reigning MVP will remain in Oklahoma City at least through the 2021-22 season.

Presti also added two of the best available players on the trade market in Paul George and Carmelo Anthony to bolster a team that won 47 games last season. OKC’s new Big Three figures to be one of the top scoring trios in the league, and many observers believe the Thunder are the top challenger to the Warriors in the West.

But now that Oklahoma City has its three stars, how long will they stay together? Westbrook will make more than $35.3MM next season when the extension kicks in, George is expected to opt out of a deal worth $20.7MM and become a free agent next summer, while Anthony has an early termination option on a nearly $28MM salary. ESPN’s Bobby Marks estimated that keeping all three would give the Thunder the first $300MM payroll, with $157MM going to salaries and $143MM in taxes.

George seemed like a lock to opt out and sign with the Lakers, but he said Westbrook’s extension may give him a reason to stay in OKC. Anthony, who will turn 34 in May, is unlikely to find a better deal in free agency, although he could be planning to join his “Banana Boat” friends in Cleveland, Los Angeles or somewhere else.

That brings us to tonight’s question: Will George and Anthony both be with Westbrook in Oklahoma City when training camp opens next year? Please share your thoughts in the space below. We look forward to your responses.

Enjoying a fresh start in Cleveland, Derrick Rose admits to being in “a dark place” last season with the Knicks, relays Dave McMenamin of ESPN. Rose missed part of training camp because of a civil suit involving sexual battery allegations, then had a much-publicized disappearance in January when he missed a game without permission. His season ended early as New York shut him down in April with a torn meniscus in his left knee that required surgery. “By a dark place, I mean, I was playing, like, revenge basketball, and that wasn’t my way of playing basketball,” Rose explained.

Rose didn’t get the free agent offers he anticipated and wound up signing a one-year minimum-salary deal with Cleveland. It’s a big step down for a former Most Valuable Player, but Cavaliers coach Tyronn Lue sees it as a sign of character. “A guy who has been MVP, who started his whole career and to come here for the minimum knowing and thinking that Kyrie [Irving] is going to be here with him being the backup, it just shows he wants to win,” Lue said. “And that’s who he is as a person. You can see it every single day. He wants to be a winner. He wants to win. He works that way. So it’s just great to have him here.”

DeAndre Jordan‘s extension talks with the Clippers haven’t reached the point of discussing numbers yet, according to Broderick Turner of The Los Angeles Times.

The 29-year-old center will make $22.6MM this year, then has a player option for 2018/19 worth $24.1MM. Jordan is heading into his 10th NBA season, which makes him eligible for 8% annual raises next summer if he stays with the Clippers.

If he decides to opt out and re-sign with L.A., he could get more than $207MM over five years. If he goes to another team, he would be limited to four seasons with 5% annual increases.

“That’s what they’ve got to do, is talk about how we can get it done,” Jordan said. “If they didn’t, they wouldn’t be doing what’s for their best interest. But they know I’m looking for what’s best for me and my family. It’s cool. We’ve talked about it, but obviously nothing has happened yet. We’ll see where it goes.”
There’s no hurry to get a deal done, as the extension deadline isn’t until June 30, the day before free agency begins. Because he doesn’t have an agent, Jordan is handling his side of the negotiations.
Jordan has been with the Clippers since being drafted in the second round in 2008. The team has expressed a desire to finalize a new deal to continue that relationship.

“Obviously we want DJ and we want DJ to finish his career with the Clippers,” said president of basketball operations Lawrence Frank. “But there’s no news to report. That’s kind of where it’s at right now.”

After signing with the Pelicans earlier this week, Martell Webster has decided to leave training camp and retire from basketball.

Webster made the announcement on Twitter, writing, “I Thank the amazing organization in New Orleans for the opportunity to play, I’ve made the decision to hang the [shoe icon] and return to the fam.”

Webster was in camp on a non-guaranteed contract, so the Pelicans won’t owe him anything. New Orleans had the maximum 20 players in camp, so Webster’s departure creates an opening.

Now 30, Webster hadn’t played an NBA game since undergoing surgery in November of 2015 to repair labrum and cartilage damage in his right hip. He played 32 games for the Wizards during the 2014/15 season, but the team waived him after the injury, which was believed to be career-threatening.

The Trail Blazers selected Webster with the sixth pick in the 2005 draft, and he spent five years in Portland before being traded to Minnesota. He was with the Wolves for two seasons and the Wizards for three.

Russell Westbrook‘s decision to sign an extension with the Thunder is making it easier for Paul George to decide whether to stay put when he becomes a free agent next summer, as he told ESPN’s Royce Young and other media members (Twitter link). George is impressed by the commitment between the reigning Most Valuable Player and the franchise, as Westbrook decided this week to sign a five-year, $205MM extension. George’s overt desire to leave the Pacers after this season, specifically for the Lakers, led Indiana to trade him to Oklahoma City. It appears George is now seriously interested in re-signing. “Not only in us pairing together but just knowing what type of dude Russ is and his values and his beliefs and him being committed to this organization says a lot,” George said. “And I’m one person that’s enjoying it here, so I think when that time comes the decision will be easier to make for myself.”

In other developments around the Northwest Division:

Every week, the Hoops Rumors writing team compiles original content to complement our news feed. Here are our segments and features from the past seven days:

Missed this week’s biggest NBA headlines? We’ve got a recap for you. Here are some of the most noteworthy stories from the last seven days: 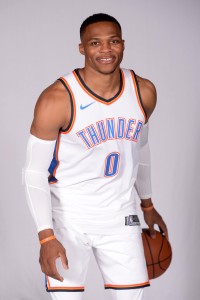 The Thunder signed last season’s Most Valuable Player, Russell Westbrook, to a five-year extension worth approximately $205MM. The contract agreement ends any speculation about where Westbrook will be playing in the near future. Westbrook’s new deal is a Designated Veteran Extension, similar to the ones signed by Stephen Curry, James Harden, and John Wall earlier this offseason. Not only is Oklahoma City committed to Westbrook, he also showed faith in the franchise that it will remain a championship contender in the coming years. It sends a clear message to Paul George that if he and Westbrook mesh well, there’s no reason for him to bolt to Los Angeles as a free agent next summer.

The league’s Board of Governors approved major changes in the draft lottery system, beginning in 2019. Commissioner Adam Silver has been seeking ways to discourage tanking and hopes that lottery reform will help achieve that goal. Under the new system, the teams with the three worst records will have an equal chance at getting the top pick. Teams that get unlucky in the lottery could slide down as many as four spots instead of a maximum of three under the current rules.

Dwyane Wade signed a one-year contract with the Cavaliers after reaching a buyout agreement with the Bulls and clearing waivers. Wade rejoined forces with his old Heat pal LeBron James in pursuit of another title. Wade left roughly $8MM of the $23.8MM he was due to receive this season on the table in order to complete the buyout, then signed for approximately $2.33MM with the three-time defending Eastern Conference champions.

Suns big man Alan Williams underwent knee surgery and will miss most of the season. Williams is projected to need six months to return from the meniscus tear in his right knee. Williams, who signed a three-year deal worth just over $17MM this summer, suffered the injury during a workout.

Restricted free agent power forward JaMychal Green finally came to terms with the Grizzlies. Green, who emerged as a starter last season, agreed to a two-year contract worth in excess of $17MM. Green’s agent has said early in the free agent process that he was exploring offer sheets and sign-and-trade scenarios, but nothing materialized and his client wound up right back where he started.

Here are 10 more notable NBA stories from the last week:

Kawhi Leonard is in a rehabilitation program  for right quadriceps tendinopathy and is expected to miss the 2017 preseason, the Spurs announced in a press release on Saturday.

Leonard battled a troublesome right quad toward the end of last season and was hampered by a right ankle injury in the playoffs. Despite the injuries, the defensive specialist played in a career-high 74 regular season games averaging 25.5 PPG, 5.8 RPG, and 1.8 SPG.

The 26-year-old came in third place for the NBA Most Valuable Player award, behind winner Russell Westbrook and James Harden.

Rudy Gay‘s season in Sacramento ended abruptly last season due to a torn left Achilles tendon. After declining his $14.2MM option for 2017/18, Gay signed a two-year pact with the Spurs looking to reestablish himself. Early indicators for the 31-year-old are positive, Tom Osborn of San Antonio-Express News writes.

“I think he’s going to be great,” guard Danny Green said to Osborn. “He’s going to give us that versatility of playing four smalls (because) he can play inside and out and guard bigs. Once he gets into shape and gets comfortable with that Achilles, I think he’ll be great for us.”

Gay has a career average of 18.4 PPG in 11 NBA seasons. If he can regain his pre-injury form for the Spurs, San Antonio will have another productive scorer in their lineup. A scorer that Green compared to Kevin Durant due to his ability to quickly shoot the ball.

Below are additional news tidbits around the Southwest Division: