The Spurs would be better off holding onto power forward LaMarcus Aldridge for another season, Mike Finger of the San Antonio Express-News opines. Aldridge can opt out of his contract next summer and leave $22.34MM on the table, which would help San Antonio pursue premier free agents, Finger notes. That would probably be preferable to adding players in a trade that would cut into potential cap space, Finger continues. With Aldridge, Kawhi Leonard and free agent acquisition Rudy Gay next season, the Spurs can still make a run at a championship, Finger adds.

In other news around the Southeast Division:

Small forward R.J. Barrett, considered the top junior prep player, has been reclassified as a senior for the next school year and could be eligible for the draft in 2019, according to Paul Biancardi of ESPN.com. The Ontario native will be eligible to sign a national letter of intent in November and is being recruited by virtually all the top programs, Biancardi continues. The 6’6” Barrett was the tournament MVP while leading Team Canada to a gold medal in the FIBA U19 World Cup.

In other news around the league:

The Pacers have waived center Kevin Seraphin, Shams Charania of The Vertical tweets. Seraphin’s salary of $1,974,159 for next season would have been guaranteed if he remained on the roster Tuesday.

Indiana has three other centers – Myles Turner, Al Jefferson and second-round pick Ike Anigbogu – on the roster. The Pacers have 13 players under guaranteed contracts.

Seraphin appeared in 49 games with the Pacers last season, including three starts, and averaged 4.7 PPG and 2.9 RPG in 11.4 MPG. He also played in four postseason games, averaging 7.3 PPG and 3.5 RPG.

Seraphin, 27, played his first five seasons with the Wizards and also toiled for the Knicks for a season before joining the Pacers last summer.

There’s a good chance he will wind up playing in Europe next season. FC Barcelona is reportedly interested in signing him. Seraphin is currently in France, where he’s training for the EuroBasket tournament with his national team.

JULY 31: More than a month after the Bucks and Snell agreed to terms on a new deal, the team has made it official, issuing a press release to formally announce the signing. 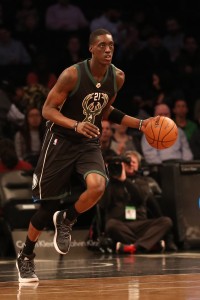 “Tony was an integral part of our team’s improvement last season and we’re excited to re-sign him,” new GM Jon Horst said in a statement. “He is a tireless worker, a terrific teammate and a man of great character. We look forward to having him back with the Bucks as we continue to build toward a championship.”

JUNE 30: The Bucks have agreed on a four-year deal with Tony Snell worth $46MM, Adrian Wojnarowski of ESPN tweets. Snell will hold a player option after the third year.

The agreement comes on the heels of a season in which Snell emerged as rotation player on a postseason contender. In 80 games for the Bucks, the swingman posted 8.5 points and 3.1 rebounds per contest.

Wojnarowski had previously written about how the three-and-D player figured to draw considerable interest on the market and the disclosed agreement falls right in line with what he predicted earlier in the month.

Fun Fact: This was the first Woj Bomb of Wojnarowski’s stint with ESPN.

Poll: When Will Kyrie, Carmelo Be Traded?

The NBA’s offseason moves at a rapid pace, with the draft typically taking place just a week or two after the NBA Finals end, then free agency getting underway about a week after that. By late July, things have often quieted down, as NBA executives and reporters take some vacation time before training camps resume in September.

This year though, things are a little different. The pace of free agent signings and trades has certainly slowed down as August approaches, but two very notable trade candidates remain on the block: Carmelo Anthony in New York and Kyrie Irving in Cleveland.

Anthony has been mentioned in trade rumors for the entire offseason, so it’s somewhat surprising that he remains with the Knicks. Still, a number of factors have complicated a potential deal, including Anthony’s no-trade clause, exorbitant salary, and trade kicker. Carmelo is reportedly focused on joining the Rockets, having not shown much enthusiasm about waiving his no-trade clause to go to another team, such as the Cavs. But the Knicks have been unable to work out a deal with the Rockets, since New York has no interest in taking back Ryan Anderson‘s contract.

The Knicks put Anthony trade talks on hold when they hired Scott Perry as their new general manager and promoted Steve Mills to president of basketball operations. But there’s still a belief that the rebuilding franchise would like to move on from the standout forward, even with Phil Jackson no longer around to create tension by lobbing thinly-veiled criticisms at Melo in the press.

Meanwhile, Irving wasn’t considered a trade candidate until about a week and a half ago, when word broke that he had asked the Cavaliers to move him. The star point guard has two more guaranteed years left on his current contract, and unlike Carmelo, he doesn’t have a no-trade clause. As such, his leverage is somewhat limited. Nonetheless, the Cavs appear dedicated to finding Irving a new home.

A Friday report indicated that at least six teams had made an offer for Irving, though one of those teams – the Heat – denied doing so. About 20 clubs reportedly inquired with the Cavs to express some level of interest in the process. Cleveland’s asking price is high for now, and many of those teams won’t be able to put together a viable package, but there appears to be optimism that something will get done.

What do you think? Will a trade involving Anthony or Irving happen soon, or will these situations continue to drag on into the fall? Can you picture either player sticking with his current team for training camp and perhaps even to start the 2017/18 season?

Submit your vote below and head to the comments section to weigh in with your thoughts!

Terrence Jones To Play In China

2:28pm: Jones’ one-year deal with Qingdao will be worth $2MM, per Adrian Wojnarowski of ESPN (Twitter link).

10:27am: Free agent big man Terrence Jones appears set to open the 2017/18 season in China. According to international basketball reporter David Pick (Twitter link), Jones has reached an agreement with the Qingdao Eagles on “one of the largest single-season deals” in CBA history.

The 18th overall pick in the 2012 draft, Jones emerged as Houston’s starting power forward in his second NBA season, averaging 12.1 PPG and 6.9 RPG in 76 games in 2013/14. However, he has not matched or exceeded those numbers in subsequent years.

Jones did provide solid part-time production for the Pelicans in 2016/17, averaging 11.5 PPG and 5.9 RPG in 51 games for New Orleans. However, the 25-year-old was waived in February after the club’s acquisition of DeMarcus Cousins, and while he caught on quickly with the Bucks, Jones didn’t play much in Milwaukee and was waived again in April.

According to Sam Amico of Amico Hoops, Jones received interest from a handful of NBA clubs, but wasn’t interested in signing a minimum salary deal. It sounds like the contract he received from Qingdao will represent a larger payday, along with the opportunity for a much more substantial role.

Checking In On Unsigned 2017 Draft Picks

One month into the 2017/18 NBA league year, most of this year’s draftees know where they’ll be playing for the upcoming season. As our tracker for draft pick signings shows, we’re only waiting for resolution on a small group of players.

There’s no rush at this point for teams to finalize plans for the last few unsigned draft picks from this year’s class, but it’s still worth checking in to see where things stand for those players. Here are the 2017 draftees whose statuses for ’17/18 appear to be up in the air:

The Hawks have waived second-year center Diamond Stone, per Chris Vivlamore of The Atlanta Journal-Constitution. Shortly after Vivlamore published his report, the Hawks issued a press release confirming the roster move.

Stone was one of two players acquired from L.A. by the Hawks in a three-way trade with the Clippers and Nuggets earlier this month. Jamal Crawford, the other player who landed in Atlanta as a result of that trade, was bought out by the club shortly after the move was finalized, so the Hawks have now cut both players involved in the deal. The Hawks also received a first-round pick in that swap, which was clearly the most important part of the package.

While Stone wasn’t Atlanta’s primary target in that trade, it’s still somewhat surprising that the team has waived him already. The big man’s minimum salary contract for 2017/18 was guaranteed, and he’s just one year removed from being drafted 40th overall. However, apparently the Hawks weren’t interested in using one of their 15 regular-season roster spots on Stone.

The Hawks could choose to stretch Stone’s $1,312,611 cap hit over the next three seasons, though the club isn’t in any cap trouble this season, so it may make sense to just keep his full salary on the books for 2017/18.

With Stone out of the mix at center, the Hawks figure to lean on Dewayne Dedmon, Mike Muscala, and Miles Plumlee.

The Magic have trimmed their roster count by one, waiving shooting guard Marcus Georges-Hunt today. The club issued a press release formally announcing the move and making it official.

Georges-Hunt, 23, joined the Celtics for training camp a year ago after going undrafted out of Georgia Tech, but didn’t earn a regular season roster spot with Boston. The 6’5″ guard spent most of the 2016/17 season with the Maine Red Claws, averaging 15.8 PPG, 6.2 RPG, and 4.4 APG, and being named to the All NBA D-League Third Team.

Georges-Hunt’s performance earned him another NBA shot — he signed a deal with the Magic in April and appeared in five games for the team down the stretch. That contract included a second year, but Georges-Hunt’s minimum salary for 2017/18 was non-guaranteed until the fall, so Orlando won’t be on the hook for any of that money.

Georges-Hunt will become an unrestricted free agent if he clears waivers on Wednesday.