With a change in majority ownership of the Suns franchise imminent, Gerald Bourguet of GoPhnx.com offers a 10-step wish list for incoming owner Mat Ishbia. Some of the items on the list includes improving relationships with employees, resolving the Jae Crowder situation with a trade, and committing to a G League franchise.

We have more on the Suns:

Devin Booker To Be Reevaluated In One Week

Suns guard Devin Booker is still at least a little ways off from returning to action. The team announced today that he’s making progress in his recovery from a left groin strain and will be reevaluated in about one week, as Gerald Bourguet of PHNX Sports relays (via Twitter).

When the Suns made their initial announcement on Booker’s injury on December 28, they said he would be reevaluated in four weeks. Today represents the four-week mark, so we got our update, but the club didn’t provide any concrete info on the star guard’s status or potential return timeline — he’ll miss at least one more week, but we don’t know much beyond that.

The Suns were 19-14 entering the Christmas Day game in which Booker returned from a groin injury and almost immediately aggravated it. They lost that game and nine of their next 11 to slip to 21-24 on the season, though they’ve rebounded nicely as of late. Since Cameron Johnson made his return from meniscus surgery last Thursday, the team has won four straight contests and is back over .500 (25-24).

Although they’re on a hot streak and got Chris Paul back this week from a hip issue, the Suns remain awfully shorthanded in the backcourt, with Booker, Cameron Payne (foot), and Landry Shamet (foot) all on the shelf. Payne hasn’t played since January 4, while Shamet has missed the team’s last four games.

Six teams are currently within one game of the seventh-seeded Suns in the Western Conference standings (in one direction or the other), so the sooner Booker is able to get back onto the court, the better.

Devin Booker isn’t close to returning from his groin injury, Duane Rankin of the Arizona Republic tweets. The Suns star, who was injured on Christmas Day, has been limited to non-contact drills, according to coach Monty Williams. There’s no firm date for Booker’s re-evaluation.

Suns point guard Chris Paul suited up on Sunday against Memphis after missing seven games due to a sore right hip, Rankin adds.

Because Lakers guard Austin Reaves only received a two-year contract when he had his two-way deal converted in September 2021, he’ll be eligible for restricted free agency after the 2022/23 season. During an episode of the Late Night Lake Show podcast, Jovan Buha of The Athletic suggested that Reaves will be in line for a substantial raise on his current minimum-salary contract.

“From what I’ve heard on that, it’s going to be more than (Alex) Caruso money, that’s for sure,” Buha said, according to Jacob Rude of Silver Screen and Roll. “It’s going to be double digits.”

When Caruso left the Lakers for Chicago last summer, he signed a four-year deal worth just shy of $37MM. Buha’s comments indicate he expects Reaves to receive at least $10MM annually on his second NBA contract.

While the Lakers haven’t been in position to make competitive offers to certain standout role players, including Malik Monk this past offseason, they’ll hold Reaves’ Early Bird rights in the summer of 2023, giving them more flexibility to make a strong bid. As Rude points out, the Gilbert Arenas provision will also apply to Reaves, so rival suitors won’t have the ability to make an offer the Lakers can’t match.

Devin Booker Out At Least Four Weeks With Groin Strain

After returning to Phoenix to undergo additional evaluation on his injured left leg, Suns guard Devin Booker has been diagnosed with a left groin strain and will be sidelined for the foreseeable future. 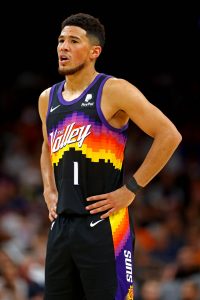 According to the team (Twitter link), Booker will be reevaluated in four weeks, meaning he’ll be on the shelf until at least late January.

Booker initially missed a pair of games on December 11 and 13 due to left hamstring tightness. He returned for two games, including a 58-point outburst against New Orleans on Dec. 17, then missed three more due to left groin soreness. He attempted to return on Christmas Day vs. Denver, but only played about four minutes before reaggravating the injury.

Booker’s absence is the latest setback for a Suns team that has had some bad injury luck so far this season. Starting point guard Chris Paul missed 14 games in November and December due to a heel problem, starting forward Cameron Johnson has been out since November 4 while rehabbing a knee injury, and key reserve Cameron Payne has been unavailable for Phoenix’s last seven games due to a foot issue.

Of course, the Suns have been without Jae Crowder all season as the front office looks to trade him. The club also has an open spot on its 15-man roster.

Playing without Booker will be the biggest challenge yet for the Suns, who are 2-4 this season without their leading scorer available (2-5 counting Sunday’s loss to the Nuggets), even after an impressive win over Memphis on Tuesday. Phoenix has a 20-15 overall record this season, but could have a hard time keeping pace in the West with eight of its next 10 games on the road.

Spurs center Jakob Poeltl has continued to play limited minutes since returning from a seven-game absence due to a bone bruise in his right knee, Jeff McDonald of the San Antonio Express-News notes.

Poeltl hasn’t played more than 24 minutes in five games since suiting up again. He was extremely effective on Monday against Utah, contributing 16 points, nine rebounds, four blocks and two steals during that time frame in the Spurs’ victory.

“It’s just about finding a rhythm again, getting back in shape,” said Poeltl, an unrestricted free agent next summer who could get dealt prior to the trade deadline if the Spurs find the right offer.

We have more Western Conference news:

The Lakers are hoping to remain in the Western Conference playoff race until Anthony Davis returns from a foot injury, but Sunday’s game provided further evidence of how hard that’s going to be, writes Dave McMenamin of ESPN. L.A. had an 11-point lead at halftime, but gave up 51 points in the third quarter of a 124-115 defeat at Dallas. It’s the Lakers’ fourth straight loss, and they have surrendered at least 124 points in each of them.

“Reality is, without AD, we lose a lot of length, which we don’t have already,” LeBron James said. “So, we have to make up in ways that, without AD, is very difficult, very challenging. So, I think at one point we had a lineup of I think (Austin Reaves, at 6-5) was the tallest guy on the court. So, you don’t have to be a rocket scientist to figure it out (that Davis is sorely missed).”

Coach Darvin Ham has been trying different lineup combinations to break the slump, but he’s limited by a lack of size throughout the roster. The starting backcourt features two 6’1″ guards in Patrick Beverley and Dennis Schroder, and 6’3″ Russell Westbrook saw some time at center on Sunday.

“You throw everything up against the wall and see what sticks,” Ham said. “It’s one of those types of situations. AD’s not here, not in the lineup. We’re not going to start using that as an excuse. Hell yeah, it’s a big hole in our lineup. But now, we’re pros. We’ve got to step up.”

Suns guard Devin Booker is expected to be available on Sunday following a three-game absence due to a groin injury, reports ESPN’s Adrian Wojnarowski (via Twitter).

Phoenix will be visiting the West-leading Nuggets in the fifth and final game of the NBA’s Christmas Day slate. Booker is officially listed as questionable for the contest, but Wojnarowski’s report suggests the Suns’ top scorer won’t miss the opportunity to play on a national stage in a marquee Western Conference showdown.

Assuming Booker is able to play on Sunday, he’ll presumably replace Landry Shamet in the starting lineup. Shamet started in Booker’s place on Friday after Damion Lee occupied that spot for the previous two games.

The Suns fell to 1-4 on the season without Devin Booker after a lopsided loss to the Grizzlies Friday night, writes Duane Rankin of The Arizona Republic. After scoring a season-high 58 points last Saturday, Booker has sat out three straight games with groin soreness.

“I am not going to downplay the fact that we miss Book,” Landry Shamet said. “Of course we do. He is an All-NBA guy. He should be in the MVP conversation. We miss him, but none of the basketball X’s and O’s stuff matters if we don’t pick up on that mentality, physicality. Hit first.”

Coach Monty Williams updated reporters on Booker’s condition before the game, saying he has started shooting again but still isn’t able to move around very much. He refused to speculate on whether Booker might be available for the Christmas Day game at Denver.

“He’s chomping at the bit as you can imagine,” Williams said. “Book’s frustrated when he’s not on the floor. Hoping he can get out there soon.”

“I think, I would say he is making progress, probably not at the rate we had hoped,” Budenholzer said. “To be able to get work in, to be ready to play — it’s really still, he only played I think four, five games — so there’s still that being ready for an NBA game and all that goes into that. So, we’ll see how the next 24, 48 hours go. … But I think overall we’re encouraged. And I think he’s in a good place and he’ll play when he’s ready. It’s a long season. We have to be patient. It’s hard for Khris. It’s hard for us, but just keep the big picture in mind always.”

While Budenholzer is typically vague when giving health updates, hopefully the fact that Middleton’s knee has been slow to respond doesn’t keep him out of action for much longer. Through seven games (24.6 MPG), the three-time All-Star is averaging 11.1 PPG, 2.6 RPG and 4.4 APG.

Here are some more injury updates from around the NBA: