Grizzlies point guard Ja Morant raised eyebrows earlier this week when he was asked by ESPN’s Malika Andrews in an NBA Today interview (video link) which teams around the league had caught his eye as opponents Memphis will have to “run through” to win a title. After Morant named the Celtics and fell silent, Andrews observed that he didn’t mention any Western Conference teams.

Speaking to reporters later in the week, Morant didn’t back off those comments at all, writes Damichael Cole of The Memphis Commercial Appeal. In fact, while the All-NBA guard identified the Bucks as another team he might add to his list, he doubled down on his feelings about his Western rivals.

“Honestly, I don’t care about anybody else feedback but ours,” Morant said. “That’s how we feel. That’s how confident we are in our abilities and where we think we stand in the Western Conference.”

Here’s more out of Memphis:

James Harden is on track to return tonight for the Sixers as they face the Rockets in Houston, writes Keith Pompey of The Philadelphia Inquirer. The star guard has been sidelined for a month with a right foot strain, missing 14 games in the process.

“As much as I love basketball, I want to be out there to compete, especially for my teammates,” Harden said. “So this month has been patience, putting the work in, making sure I’m ready to come back and help this team get to where we can get to.”

Head coach Doc Rivers indicated on Sunday that Harden would be on a minutes restriction.

“Hopeful, he’ll be ready for [Monday],” Rivers said. “And if he is, he’ll be in a limited role. But it’s still better to have him than not, if we can have him.”

After winning four of five, the Sixers have dropped two straight games and currently hold a 12-11 record.

Here are some more injury-related updates from around the NBA: 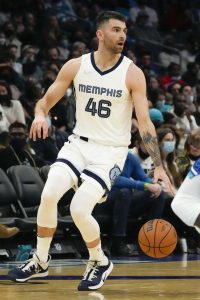 According to Wojnarowski, the deal will be fully guaranteed, and Konchar will now be locked up through the next five seasons, as he still has two years left on his current contract.

As we relayed a few days ago, Konchar’s $2.3MM salary for 2022/23 became guaranteed once he remained on the roster through this past Sunday. He had already been owed a partial guarantee of $840K.

Konchar, 26, went undrafted out of Purdue-Fort Wayne in 2019 after a four-year college career. As shown by Basketball Reference, Konchar is the only known former Mastodon to reach the NBA.

In addition to his rebounding prowess, Konchar holds impressive career shooting percentages of 61.2% on twos and 40.6% on threes in 134 games (52.2% from the field overall). He’s also an intelligent ball-mover and solid defender, with a career assist-to-turnover ratio of 3.3:1.

De’Anthony Melton, another backup guard, was traded to Philadelphia a couple of weeks ago, so it’s possible that Konchar could have a bigger role next season. Either way, clearly the Grizzlies value his contributions, as evidenced by the fact that Konchar is under contract through ’26/27.

Once the extension becomes official, Konchar won’t be trade-eligible for six months.

John Konchar‘s contract with the Grizzlies called for his $2.3MM salary for 2022/23 to become guaranteed if he remained on the roster through Sunday, and there has been no reporting indicating that he and the team agreed to move that date back. As such, we’re assuming Konchar’s salary for ’22/23 is now locked in.

Konchar is one of many players on non-guaranteed contracts for 2022/23 whose salaries will become guaranteed this summer if they’re retained through certain dates. We’re tracking all of those players and decisions right here.

Here are a few more contract notes from around the NBA:

All the Grizzlies players who were recently placed in the NBA’s health and safety protocols have now been cleared, head coach Taylor Jenkins said on Thursday evening (Twitter link via Damichael Cole of The Memphis Commercial Appeal). After three Memphis players exited the protocols on Wednesday, John Konchar and Xavier Tillman were the only players still affected — they’re apparently out of the protocols now too.

Here are the latest developments on players entering or exiting the league’s health and safety protocols:

The Mavericks used a portion of their mid-level exception to sign both free agent guard Trey Burke and No. 31 pick Tyrell Terry, as Keith Smith of Yahoo Sports details (Twitter links).

Burke’s three-year contract with the Mavericks, initially reported as a $10MM deal, actually has a total value of $9.45MM, starting at $3MM in 2020/21, per Smith. However, it does include a third-year player option and a 7.5% trade kicker, which would provide Burke with a modest bonus if he’s dealt before the contract expires.

Terry, meanwhile, will get a first-year salary of about $1.29MM, well above the rookie minimum. The final three years will be all be worth the minimum, with a team option on the final season, according to Smith. In total, Terry’s four-year contract with the Mavericks is worth $6.52MM, with $4.59MM in guaranteed money.

John Konchar‘s new deal with the Grizzlies, which will use part of the team’s mid-level exception, is guaranteed for the first two seasons, according to Keith Smith of Yahoo Sports (Twitter link). In 2022/23, only $840K of Konchar’s full $2.3MM salary is guaranteed, and his $2.4MM salary for ’23/24 is non-guaranteed, Smith adds.

Konchar was one of a handful of Grizzlies who signed a multiyear contract that isn’t fully guaranteed on the back end. As Smith explains (via Twitter), De’Anthony Melton‘s four-year contract, which has a descending structure, only has a partial guaranteed of $1.5MM on his $8MM salary for 2023/24.

Here are a few more contract details from around the Western Conference, all courtesy of Smith:

NOVEMBER 22: The Grizzlies have made their deal with Konchar official, announcing it in a press release.

Konchar, 24, was on a two-way contract with the team last season, averaging 2.8 points and 2.5 rebounds in his 19 games. He spent most of his time with the team’s G League affiliate, holding per-game averages of 12.2 points, 8.3 rebounds and 29.1 minutes. He received a qualifying offer from the Grizzlies earlier this week that made him a restricted free agent.

In addition to Konchar, Memphis also agreed to a new four-year contract with De’Anthony Melton on Saturday, plus two-way deals with Killian Tillie and Sean McDermott earlier in the week. The team lost forward Josh Jackson to Detroit when free agency began Friday night.

Konchar went undrafted in 2019, signing a two-way contract with the Grizzlies shortly thereafter. He spent four seasons at Purdue University Fort Wayne from 2016-19.

Saric and Poeltl are the most notable names in the group and were also the most likely to receive qualifying offers, since Phoenix and San Antonio will want to retain the ability to match offer sheets on those players. Saric’s QO is worth about $5.1MM, while Poeltl’s is for approximately $4.6MM.

Saric, Poeltl, and the other players who received qualifying offers could accept those one-year contract offers, but will likely try to negotiate new, longer-term deals, either with their own teams or with rival suitors.

The Pistons won’t be extending a qualifying offer to two-way player Jordan Bone, so he’ll become an unrestricted free agent, according to James Edwards III of The Athletic (Twitter link).

Meanwhile, Raptors general manager Bobby Webster confirmed this week that the club will be making its annual qualifying offer to EuroLeague guard Nando De Colo, per Blake Murphy of The Athletic (Twitter link). Currently a member of Fenerbahce in Turkey, De Colo hasn’t played in the NBA since 2014, but would be a Raptors RFA if he wants to return, since Toronto has issued a QO each year since then.