The NBA G League will have an increased presence at this year’s NBA All-Star weekend, having introduced a new Next Up Game that will take place on Sunday, February 19 prior to the NBA’s All-Star Game.

As outlined in a G League press release, the game will feature 24 NBAGL standouts, with 10 of those players selected by fan vote.

Players on G League contracts or two-way deals who have appeared in at least four games this season will be eligible to participate in the game. However, players on standard NBA contracts won’t be — that means you wouldn’t be able to vote for, say, Warriors center James Wiseman, despite the fact that he has appeared in 10 games this season for Santa Cruz.

“I feel good,” LaVine said after Saturday’s practice. “Obviously, I’m going to take training camp this year to pretty much get back into it. It’s the first time I really had to do that, because I rehabbed all summer. But I feel really good.

“Training camp has been really good for me. This is my first live action. I actually surprised myself a little bit, how I was feeling. I thought I was going to have to work my way in a little bit more. But I’ve been playing pretty good.”

The two-time All-Star signed a five-year, $215MM contract in July to stay with Chicago.

Here’s more from the East:

With the Las Vegas Summer League underway, top pick Paolo Banchero isn’t shying away from the spotlight, Tim Reynolds of The Associated Press writes. The Magic forward is eager to show the fans why Orlando considered him the draft’s top prospect.

“I love when big crowds are out, when all the cameras are out, that’s when I play my best,” he said. “So, I’m looking forward to it and it’s going to be fun.”

There has been no progress between the Suns and Deandre Ayton on a new contract, and a sign-and-trade appears to be the most likely outcome, ESPN’s Adrian Wojnarowski said on Sports Center (video link).

Ayton is a restricted free agent, giving Phoenix the opportunity to match any offer he receives, but that’s unlikely to happen, according to Woj. He explains that the Suns don’t value Ayton as a max contract player, but other teams do, which means that’s what he’ll likely receive when free agency begins Thursday afternoon.

Although he doesn’t mention any specific teams, Wojnarowski cites “several” potential destinations for Ayton on a max deal, with the Suns receiving some combination of players, draft picks and cap flexibility in return.

Former lottery pick and free agent guard Kris Dunn will participate in a Wizards mini-camp this weekend, Josh Robbins of The Athletic tweets. Dunn was the fifth pick of the 2017 draft

Dunn spent one season with the Timberwolves and three with the Bulls before joining the Hawks during the 2020/21 season, where he only saw action for four games due to an ankle injury. He struggled to get another NBA job last season until March, when he received a 10-day contract with Portland. He finished last season with the Trail Blazers, averaging 7.6 PPG and 5.6 APG in 24 MPG over 14 games.

We have more on the Wizards:

2:45pm: The Blazers have officially signed Eubanks and Dunn for the remainder of the season, the team announced.

11:08am: Drew Eubanks and Kris Dunn will sign hardship contracts with the Trail Blazers that cover the rest of the regular season, tweets ESPN’s Adrian Wojnarowski.

Eubanks has taken over as Portland’s starting center after signing with the team in February. He has inked four 10-day contracts, the last of which expired Saturday night. In 18 games, he’s averaging 14.1 points and 8.7 rebounds while shooting 64.9% from the field. Eubanks became available when the Spurs traded him at the deadline to the Raptors, who immediately waived him.

Dunn hadn’t played at all this season before signing a 10-day deal with the Blazers on March 14. He was given a second 10-day contract on March 24 that expired last night. Dunn has appeared in 11 games, averaging 8.6 points, 3.1 rebounds and 5.4 assists in 23.5 minutes per night.

Portland has a full 15-man roster, but qualifies for several injury-related hardship exceptions due to all the players who are out for the rest of the season. Reggie Perry is also under contract on a 10-day hardship deal.

9:11pm: The signing under the hardship exception is official, according to a team press release.

Dunn has appeared in six games with depleted Portland, averaging 7.3 PPG and 5.2 APG in 24.8 MPG. He was added under the injury hardship exception and presumably the Blazers will use the same provision the second time around, since they have a full 15-man roster.

Dunn was playing for the G League’s Agua Caliente Clippers of Ontario prior to getting another opportunity to play in the NBA. The former No. 5 overall pick spent last season with the Hawks, but was limited to four games due to an ankle injury. He was traded from Atlanta to Memphis in the offseason and was subsequently waived.

Portland is scrambling to find bodies to finish out the season.

Drew Eubanks is reportedly signing a fourth 10-day with Portland. The Blazers have seven players who might miss the remainder of the season due to assorted injuries. Additionally, Josh Hart has missed the last two games due to a left knee issue.

The Trail Blazers have officially signed big man Drew Eubanks and guard Kris Dunn to 10-day contracts, the team announced today in a press release. Both deals, which were previously reported, were completed using hardship exceptions. 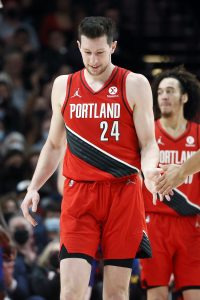 It’s Eubanks’ third 10-day deal with the Blazers. He has started seven games at center for the team, averaging 9.6 PPG and 8.1 RPG in 26.0 minutes per contest.

Dunn is a new addition, having been called up from the G League’s Agua Caliente Clippers of Ontario. The former No. 5 overall pick spent last season with the Hawks, but was limited to four games due to an ankle injury. He was traded from Atlanta to Memphis in the offseason and was subsequently waived.

Portland has at least six such players – Damian Lillard, Nassir Little, Jusuf Nurkic, Didi Louzada, Joe Ingles, and Eric Bledsoe – and possibly as many as eight, if Anfernee Simons and Justise Winslow aren’t expected to return soon. That’s why the club is eligible for multiple hardship exceptions.

The 27-year-old guard has been out of the NBA since being waived by the Grizzlies in October after one preseason game. He joined the Agua Caliente Clippers in the G League in January and is averaging 11.8 points, 5.1 rebounds and 4.1 assists in 14 games.

The fifth selection in the 2016 draft, Dunn spent his first NBA season with the Timberwolves and then three years with the Bulls. He signed with the Hawks prior to the start of the 2020/21 season, but was only able to play four games before undergoing ankle surgery. Atlanta shipped him to Boston in a three-team trade in August, and the Celtics rerouted him to Memphis in a September deal.

Dunn will provide backcourt depth for the injury-riddled Blazers, who recently lost Anfernee Simons for the next week or two with mild patellar tendinopathy in his left knee.

Portland has a full roster, but can add players through hardship contracts because Damian Lillard, Didi Louzada, Jusuf Nurkic, Nassir Little, Joe Ingles and Eric Bledsoe are all sidelined with long-term injuries. Drew Eubanks is also on a 10-day hardship deal.

Dunn’s signing will likely take place on Monday, making him eligible to play in six games during the 10-day contract.

Teams that still have money remaining on their mid-level and bi-annual exceptions saw those exceptions begin to prorate downward by 1/174th per day on Monday, January 10, as Bobby Marks of ESPN tweets.

For instance, if a team still had $5MM of its mid-level exception on Monday, that amount has now begun to decrease by $28,736 per day. The daily reduction for the rest of the season is always determined based on the amount of the exception left on January 10. So even if that hypothetical team with $5MM of its mid-level remaining decided to use $2MM of it today, the leftover amount would continue to decrease by $28,736 per day going forward.

Many teams have either already used their mid-level and bi-annual exceptions or don’t intend to. However, this may affect certain teams that want to pursue players on the buyout market or plan to convert players from two-way contracts to standard deals later in the season.