JULY 14, 10:34am: The Spurs have officially signed Gasol, the team confirmed today in a press release.

JULY 4, 1:48pm: While some contract details still have to be finalized, the Spurs and Gasol are in agreement, reports David Aldridge of NBA.com (Twitter links). Gasol’s new two-year deal will be worth $30MM, with a player option for the second year, tweets ESPN’s Marc Stein. 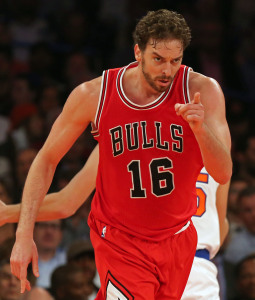 1:39pm: The Spurs are finalizing an agreement to bring aboard free agent big man Pau Gasol, reports Adrian Wojnarowski of The Vertical. While the Raptors, Trail Blazers, and Timberwolves had been among the teams in the hunt for Gasol, San Antonio was viewed as the frontrunner for the Spaniard after missing out on Kevin Durant.

Gasol, who signed with the Bulls in 2014, declined a third-year player option that would have paid him $7,769,520 in 2016/17 if he had opted into the final year of his previous contract. The former third overall pick continued to be productive during his time in Chicago, averaging 16.5 points and 8.9 rebounds per game last season, and earning All-Star nods in each of the last two years.

The Spurs have long been viewed as a potential fit for Gasol, one that even Pau’s brother has advocated for. Back in April, Marc Gasol advised his brother to sign with San Antonio. With Tim Duncan leaning strongly toward retirement, San Antonio reportedly pursued Pau heavily, making him a top priority when it became clear Durant wouldn’t become a Spur.

While San Antonio was aggressive in its pursuit of Gasol, the Spurs weren’t necessarily a slam-dunk choice. According to Wojnarowski, Pau may have received offers in the $20MM-per-year range from other suitors, including the Blazers.