The Spurs have locked up first-round pick Dejounte Murray, according to Mike Monroe of The Rivard Report, who tweets that Murray has signed his rookie contract with the team. The move comes on the heels of San Antonio making its deal with Pau Gasol official. 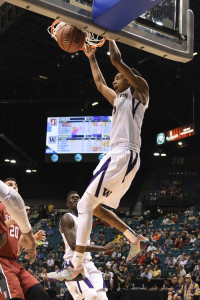 Murray, 19, was viewed as a possible lottery pick in this year’s draft, but ultimately fell to No. 29, where the Spurs snatched him up. The pick earned San Antonio a grade of A+ from ESPN’s Chad Ford (Insider link) in his post-draft round-up, with Ford writing that the young combo guard has a chance to develop into an All-Star player if he can improve his shooting.

In his lone season at Washington, Murray averaged 16.1 PPG, 6.0 RPG, 4.5 APG, and 1.8 SPG. As Ford notes, Murray’s outside shooting wasn’t impressive – he shot just 28.8% from three-point range – but that’s something that could improve with age.

As detailed in our breakdown of this year’s first-round rookie salaries, Murray will earn about $1.18MM in 2016/17, and just over $6MM over the course of his four-year rookie contract.