The Grizzlies blew out the Bucks by 41 points on Thursday night, holding stars Giannis Antetokounmpo and Khris Middleton to 22 total points on a combined 6-of-25 shooting. After guarding Middleton for much of the night, Grizzlies wing Dillon Brooks was asked if he ought to be in the conversation for Defensive Player of the Year and replied that he “100%” should be, according to Damichael Cole of The Memphis Commercial Appeal (Twitter link).

“I don’t get the steals or the big-time blocks, but I’m going to give fits to whoever I got that night,” Brooks said.

Defensive Player of the Year voting typically favors big men, so if a Grizzlies player receives serious consideration for the award, it might end up being Jaren Jackson Jr., who is averaging 3.3 blocks per game. Still, Jackson has missed some time and it’s Brooks who is tied for third in the league in NBA.com’s defensive win shares stat at 3.8.

Let’s round up a few more Southwest notes…

Last month, Charles Bassey was trying to keep his job with the Sixers, but he’s been given a much larger role since joining the Spurs, writes Tom Orsborn of The San Antonio Express-News. On October 13, Philadelphia waived the 22-year-old, who had fallen to fourth on the team’s center depth chart after the signing of Montrezl Harrell. Eleven days later, Bassey got a second chance with San Antonio on a two-way contract.

“He knows his role,” coach Gregg Popovich said. “He rebounds, blocks shots, runs the floor, and he does it with a lot of energy.”

Bassey has more than doubled his playing time in his second NBA season, averaging 6.1 points and 6.6 rebounds in 16.3 minutes per night. He only appeared in just 23 games as a rookie, but he’s still thankful for the opportunity he got from Sixers coach Doc Rivers.

“Me and Doc, we were good,” Bassey said. “Doc was one of the coaches I was excited to play for, but everything didn’t work out. Both these coaches (Rivers and Popovich) have coached great guys. Doc coached ‘KG’ (Kevin Garnett in Boston) and Pop has coached Tim Duncan. Philly gave me the opportunity to play in this league, and I am grateful to that organization. But playing for the Spurs right now is a dream come true.”

Jaren Jackson Jr. is close to making his season debut for the Grizzlies, according to Damichael Cole of the Memphis Commercial Appeal.

Jackson was listed as doubtful to play against Washington on Sunday, then was declared out. He was listed as out for all previous games this season as he rehabbed from foot surgery. Jackson recently started playing in 5-on-5 situations during practice.

Sixers All-NBA center Joel Embiid is playing through multiple injuries as he strives to keep his 6-7 club afloat without injured co-star James Harden, per Keith Pompey of The Philadelphia Inquirer.

Embiid is dealing with a tweaked ankle and an injured right shoulder, the latter of which is so restrictive that the big man says he occasionally struggles to lift his arm.

“And when I go block shots, I really feel it,” Embiid said. “I don’t know what’s going on. But it’s whatever.”

Despite the various ailments, Embiid is still having a big on-court impact. Through his nine healthy games this year, the seven-footer is averaging 29.3 PPG, 10.0 RPG, 3.7 APG and 1.2 BPG.

The Rockets‘ Jabari Smith and the Magic’s Paolo Banchero had their first regular season matchup Monday since Orlando’s last-minute decision to bypass Smith and make Banchero the No. 1 pick in this year’s draft, writes Jonathan Feigen of The Houston Chronicle. Banchero has gotten off to a sizzling start and is the early favorite for Rookie of the Year, while Smith is still adjusting to the NBA.

“He just needs to feel comfortable on the floor so we’re figuring that out as we go along,” Houston coach Stephen Silas said. “Having him on the elbow not just as a scorer but as a passer, we’re going to explore that. He has shown the ability to shoot the pull-up in transition as well as give it up and trail in transition. His 3-point shooting really sets up the rest of his game. People are hugged up to him and they close out to him. So, he can get to his drives or his pull-ups or whatever off that.”

Smith, who is shooting just 30.3% from the field and 30% from three-point range, said he hasn’t been discouraged by the slow start. He admits the transition from college is difficult, but he’s focused on learning to play at the NBA level.

“I feel like it’s just confidence, just trusting my work, being aggressive, being real precise with what I’m doing, not hesitating, and just playing my game,” Smith said. “I feel like it’s going to come. I’m not worried at all.”

Lauri Markkanen was not the centerpiece of the package the Jazz received in the Donovan Mitchell blockbuster with the Cavaliers. However, in his first regular-season week with Utah, Markkanen has played like a star, Sarah Todd of the Deseret News writes. In the first three games, he averaged 24 points, 9.7 rebounds and 3.7 assists, all career-highs.

“It’s a good fit here,” Markkanen said. “I’ve tried to stay active and aggressive on both ends every time I come out there. It’s a good start, but we’ve still got to keep learning and keep getting better.”

Charles Bassey‘s representatives spoke to 22 teams after the big man was waived by Philadelphia on October 13, including the Pistons, Cavaliers, Suns, and Raptors, reports Keith Pompey of The Philadelphia Inquirer. However, according to Pompey, most of the teams that reached out to Pompey wanted to sign him to an Exhibit 10 contract and have him play on their G League affiliate this season.

Some of those G League offers might’ve resulted in a promotion to the NBA later this season or in 2023/24, but Bassey didn’t want to settle — he ultimately signed a two-way contract with the Spurs earlier today.

“I didn’t want to wait for the next year for a roster spot,” Bassey said, per Pompey. “That’s too long. The Spurs came hard … Some of the teams wanted to give me a roster spot, but they couldn’t give me one right now. I just didn’t want to go through that (Exhibit 10/G League) route. San Antonio said, ‘We can give you a two-way this year and we’ll see where it goes from there.'”

It’s a homecoming of sorts for Bassey, who lived in San Antonio when he first moved to America from Nigeria in 2015 and still has some family in the city. He also believes the franchise is an ideal fit for him.

Here’s more on the Spurs:

1:18pm: The Spurs have officially signed Bassey to a two-way contract, the team announced in a press release. San Antonio waived Hall to open up a spot for the new addition.

The 53rd overall pick in the 2021 draft out of Western Kentucky, Bassey appeared in 23 games for the Sixers as a rookie, averaging 3.0 points and 2.7 rebounds in 7.3 minutes per contest. He thrived when assigned to the G League, averaging 18.9 PPG and 10.3 RPG in 17 regular season games (28.6 MPG) for the Delaware Blue Coats.

Bassey, who played two years of high school basketball in San Antonio, had been under contract in Philadelphia for two more seasons, but his partial guarantee for 2022/23 was only worth about $75K. That made him one of the odd men out when the Sixers had a roster crunch — he was waived at the end of the preseason and become a free agent earlier this month.

In order to sign Bassey to a two-way deal, the Spurs will have to waive one of their current two-way players, Dominick Barlow or Jordan Hall. Both rookies signed with San Antonio this summer after going undrafted in June, with Hall receiving a two-year contract. He’ll likely be the player cut to make room for Bassey, tweets Tom Orsborn of The San Antonio Express-News.

As our two-way contract tracker shows, 59 of the 60 league-wide two-way slots are currently occupied. The Timberwolves are the only team with an opening.

5:37pm: The Sixers have officially announced in a press release that they’ve waived Bassey and Joe.

8:32am: The Sixers are also waiving Joe, reports Shams Charania of The Athletic (Twitter link). With Joe’s non-guaranteed $1.78MM salary no longer on the books, the team will have more than $5.5MM in breathing room below its hard cap, tweets Bodner. 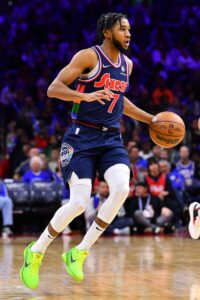 The two cuts will give the Sixers the option of opening the season with just 14 players on their standard roster or of adding a 15th man (including perhaps Joe) on a new non-guaranteed contract.

Joe’s previous deal called for his full 2022/23 salary to become guaranteed if he made the opening night roster, so Philadelphia theoretically could re-sign him on a more team-friendly contract if he passes through waivers, though it’s unclear if that’s in the plans. The team also may have interest in bringing him back on a two-way deal, says Kyle Neubeck of PhillyVoice.com.

8:18am: The Sixers have waived big man Charles Bassey, according to Keith Pompey of The Philadelphia Inquirer (Twitter link).

The 53rd overall pick in the 2021 draft out of Western Kentucky, Bassey signed a three-year, minimum-salary contract with Philadelphia last September, then appeared in 23 games as a rookie, averaging 3.0 points and 2.7 rebounds in 7.3 minutes per contest. He played a starring role when assigned to the G League, averaging 18.9 PPG and 10.3 RPG in 17 regular season games (28.6 MPG) for the Delaware Blue Coats.

Although Bassey’s contract ran through 2024, it wasn’t fully guaranteed beyond his rookie season, making his grip on a roster spot tenuous this fall. Isaiah Joe‘s strong Summer League showing and the Sixers’ decision to sign Montrezl Harrell a month ago to fill out their frontcourt also didn’t work in his favor, making Bassey the odd man out.

Assuming Bassey clears waivers without being claimed, the 76ers will be on the hook for his partial guarantee of $74,742. Because that guarantee exceeds $50K, he’s ineligible to play for the Delaware Blue Coats – Philadelphia’s G League team – as an affiliate player or two-way player.

A team with interest in claiming Bassey off waivers would need a trade exception, disabled player exception, or cap room to absorb his $1,563,518 salary. Even though he’s earning the minimum, the fact that Bassey was on a three-year contract means he can’t be claimed using the minimum salary exception.

With Bassey and Trevelin Queen out of the picture, Philadelphia looks poised to carry a 15-man roster that features 13 players on fully guaranteed salaries, plus Paul Reed and possibly Joe on non-guaranteed deals. The Sixers’ team salary is now approximately $3.76MM below the hard cap, tweets Derek Bodner of The Daily Six.

After battling health issues as a rookie, Magic guard Jalen Suggs was frustrated to sustain another injury during the preseason, so it came as a relief when his diagnosis wasn’t as serious as it could have been. Suggs has a left knee capsule sprain and bone bruise.

“Those things really can either go one of two ways — they can be the worst or be things that are really manageable,” Suggs said on Sunday, per Khobi Price of The Orlando Sentinel. “Thankfully, it was one of those really manageable things.”

Speaking to Price in a separate Sentinel story, orthopedic surgeon Dr. Tony Wanich said Suggs was fortunate to avoid an ACL injury and suggested that the second-year guard could be back on the court in November.

“A capsule injury usually heals in about two-to-four weeks,” Wanich said. “But the bone bruise usually takes a bit longer and closer to the six-week timeline depending on how extensive that bone bruise is.”