The Bulls‘ bench came up big again on Wednesday in the team’s win over Indiana, scoring a season-high 43 points, according to K.C. Johnson of NBC Sports Chicago. Alex Caruso, Goran Dragic, Andre Drummond, Javonte Green, Derrick Jones, and Coby White have all been regular contributors outside of the starting five, with the team frequently running out lineups that feature Zach LaVine and four reserves.

“We mesh really well because everybody does what they do at a high level. And I think it complements each other really well,” Caruso said. “Drum gives us that inside presence—great screener, great rebounder, rim protection. Me on the outside kind of stirring everybody up on defense whether it’s Woo (Green) or D.J. helping out with the four-man doing the same thing. And then any of the guards that are in with us, whether it’s Coby, Goran or Zach, doing a good job making decisive decisions.”

Of the Bulls’ lineups that have played at least 10 minutes so far this season, none have performed better than the five-man group of Caruso, Dragic, LaVine, Jones, and Drummond, which has outscored opponents 42-21 in 17 minutes of play.

Here’s more on the Bulls:

After being held out of the Bulls‘ first two games, Derrick Jones Jr. is trying to prove he deserves regular playing time, writes Rob Schaefer of NBC Sports Chicago. Jones helped change the course of Monday’s win over the Celtics, scoring 10 points in the second quarter during his eight minutes on the court as Chicago turned a nine-point deficit into a seven-point lead. He also made an impact on defense as Boston managed just 15 points in the quarter.

Schaefer notes that Jones might not still be with the Bulls if their offseason pursuit of free agent Danilo Gallinari had been successful. Instead, Gallinari signed with the Celtics and Jones returned to Chicago on a one-year, $3.3MM contract that could turn into a bargain.

“I’ve been through this many times throughout my career,” Jones said of having to fight for a rotation role. “It’s not the first time. I’m good. … Always working. We stay in the gym, even the guys that get low minutes, we stay in the gym.”

Second-year Bulls point guard Ayo Dosunmu has a chance to be the team’s starter at the position, at least until the return of a surgically repaired Lonzo Ball later in the season, writes K.C. Johnson of NBC Sports Chicago.

Though Alex Caruso, the stronger defensive player, will most likely take over ball-handling duties to close out games, Caruso’s aggressive approach on defense (he was whistled for five fouls in a preseason game Tuesday) may compel head coach Billy Donovan to ensure he remains available to close out games — starting Dosunmu at the point would allow Caruso to avoid getting into early foul trouble.

Caruso has taken Dosunmu under his wing, imparting sage advice on the younger player.

“He’s a helluva player so there’s not too much you have to tell him about his game to get him going,” Caruso said. “Just make sure he stays motivated and ready.”

The two-year contracts that Andre Drummond and Derrick Jones signed with the Bulls have virtually identical terms. Both players will earn guaranteed $3.2MM salaries in 2022/23, with $3.36MM player options for the ’23/24 season, Hoops Rumors has learned. The only real difference between the two deals is how the Bulls completed them — Drummond received a portion of the non-taxpayer mid-level exception, while Jones was re-signed using his Non-Bird rights.

Here are more details on recently signed contracts from around the NBA:

It didn’t take long for first-round pick Dalen Terry to earn the respect of his new Bulls teammates, writes Darnell Mayberry of The Athletic. In his first practice with Chicago’s Summer League squad, Terry showed why he had a reputation as a maximum-effort player at Arizona.

Second-year forward Patrick Williams singled out Terry as the strongest competitor at today’s practice. That recognition was installed by coach John Bryant, who is trying to make the Summer League experience as competitive as possible.

“It means everything,” Terry said. “I appreciate Pat for doing that. It gave me a little bit more confidence. He was a rookie last year and he’s been through what I’ve been through, obviously. For him to do that, it’s definitely a nod and respect to him. I appreciate him for saying that.”

JULY 6: Jones is officially back under contract with the Bulls, according to a Twitter announcement from the team.

JULY 1: The Bulls and Derrick Jones have agreed to a new two-year contract that will keep the free agent forward in Chicago, reports Shams Charania of The Athletic (Twitter link). According to Charania, Jones’ two-year deal will be worth $6.6MM, with a second-year player option. 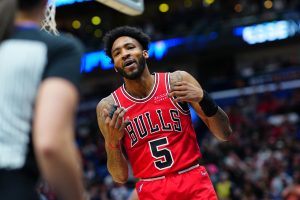 Chicago held Jones’ Early Bird rights, but a deal completed using the Early Bird exception can’t include a second-year option, so the team is likely renouncing its Early Bird rights and making Jones a Non-Bird free agent. The Bulls would then be able to complete the signing without dipping into their mid-level exception.

While Jones hasn’t made a major impact on the offensive end since entering the NBA in 2016, his athleticism and his ability to guard multiple positions on defense have continued to earn him regular minutes.

The Bulls now project to be about $3.5MM below the luxury tax line with 14 players under contract, tweets Yossi Gozlan of HoopsHype.

The Bulls were furious at the Bucks’ Grayson Allen after his hard foul against Alex Caruso in January resulted in Caruso fracturing his right wrist. Derrick Jones Jr. appeared to exact some revenge on Friday, though Jones claims his flagrant foul against Allen wasn’t intentional, ESPN’s Jamal Collier writes.

“I’m not a dirty player. Honestly, I talked to every ref that was there (Friday),” the Bulls forward said. “I didn’t think that was a flagrant. They said I hit him in his head. I didn’t even feel it. I just felt him bump my hip and fall. That’s all I felt.”

When Jones initially broke his finger in January, he was given a six-to-eight week recovery timeline. However, the Bulls later issued an update saying the forward would be able to return sooner if he was able to play with a splint. That was less than three weeks ago.

Jones returned on Saturday against the Thunder, playing 23 minutes off the bench. In addition to a finger injury, he was also dealing with a knee injury he suffered a couple weeks before breaking his finger, so this was his first action in a month.

“Personally, I love to compete, and me being out since January 12 has been eating me alive on the inside,” Jones said. “I was just waiting for this pain to die down a little bit so I could hop back out there. Soon as it went away a little bit, I was right back out there tonight.”

JANUARY 26: Jones will be evaluated “in about a week” to determine whether he can play while wearing the splint on his right index finger, according to coach Billy Donovan, as Rob Schaefer of NBC Sports Chicago relays (via Twitter). The Bulls said in their press release that Jones could return to action sooner than six-to-eight weeks if he’s able to play with the splint, Schaefer notes.

JANUARY 25: During a workout at the Bulls practice facility while rehabbing from a bone bruise in his right knee, Chicago reserve forward Derrick Jones Jr. broke his right index finger, the team has announced.

Chicago adds that Jones will be unavailable for approximately the next six-to-eight weeks. The fractured digit is currently in a splint. Rob Schaefer of NBC Sports Chicago notes that Jones has injured his non-shooting hand.

Jones was two weeks into his recovery from the bone bruise, and had been projected to return in another two-to-four weeks prior to fracturing his finger. In 31 games this season, Jones is averaging fairly modest counting stats of 6.3 PPG and 3.4 RPG across 17.2 MPG for the Bulls. He is also connecting on a career-best 40.5% of his 1.2 three-point attempts per game. The numbers belie the true extent of his impact for Chicago.

His extreme athleticism and 7′ wingspan have made Jones a versatile defender off the bench for the Bulls. The springy 6’5″ forward, still just 24, has emerged as an intriguing small-ball center option for head coach Billy Donovan in certain Chicago lineups.

The injury woes continue for Chicago. Though All-Star shooting guard Zach LaVine and power forward Javonte Green recently returned to the team’s lineup in a 111-110 victory over the Thunder after their own injury absences, several Bulls players remain sidelined with long-term ailments. Guards Lonzo Ball and Alex Caruso just underwent surgeries and will also be unavailable for at least the next six weeks of games. Starting power forward Patrick Williams has missed all but five games this season with a dislocated wrist, and will return at the earliest in April.

Jones and his expiring $9.7MM contract were viewed as favorable trade fodder for the Bulls. Were the Bulls to try to offload a young player on a rookie deal for a veteran upgrade as the NBA nears the February 10 trade deadline, Jones could be used to match salaries. With his fate for the next two months now more bleak, it will be interesting to see how this impacts the roster construction choices of Chicago president Arturas Karnisovas and GM Marc Eversley. Chicago has been hit particularly hard at the point guard and power forward spots.

At 29-17, the Bulls are currently the second seed in the Eastern Conference. Zooming out, the team has gone a mere 3-7 in its last 10 games as the injuries have begun to pile up and is just four games ahead of the 26-22 Hornets, the seventh seed in the East.

6:13pm: The Bulls announced that Jones will miss two-to-four weeks with the bone bruise instead of the originally reported four-to-six, per K.C. Johnson of NBC Sports Chicago (Twitter link).

Jones suffered the injury on an awkward landing 36 seconds into Wednesday’s game against the Nets, writes Jamal Collier of ESPN. He had to be helped to the locker room, and the team announced that he wouldn’t return.

Jones has started Chicago’s last six games while Javonte Green has been sidelined with a groin strain. After coming to the Bulls in an offseason trade, Jones is averaging 6.3 points and 3.4 rebounds through 31 games.

Chicago is also missing guard Alex Caruso, another member of its rotation, who remains in the league’s health and safety protocols and isn’t expected back for Friday’s game.

“It’s going to be tough because you can’t replace those guys,” Zach LaVine said. “It’s always been a next-man-up mentality that we’ve had. It’s something we’re going to have to do because it’s not like anybody is going to feel sorry for us having some guys out. Everybody’s had guys out.”