It didn’t take T.J. Warren long to prove he can still play at a high level, but the Nets are focused more on keeping him healthy for the playoffs than maximizing his contributions during the regular season, writes Greg Joyce of The New York Post. Warren missed nearly two full seasons due to foot injuries before returning to the court in early December.

“Every game, I’m feeling more and more like myself,” he said. “Two years is a long time, two calendar years going through multiple foot problems. But I feel great. Mentally, I’m in a good space. I just want to continue to get better and help this team win as much as I can.”

Through 17 games, Warren is averaging 10.5 points off the bench in 20.4 minutes per night. Coach Jacque Vaughn considered moving Warren into the starting lineup in the wake of Kevin Durant‘s injury, but opted for Joe Harris instead in an effort to control Warren’s workload.

“I’ve told him this message: That’s my No. 1 goal, that he’s healthy and hooping in the playoffs, showing his skills off to the rest of the world,” Vaughn said. “That would be the kind of guiding light. Will I be tempted at times (to push his minutes) if he’s rolling? For sure, every coach would be. But hopefully for his longevity, for the group, we’ll put him in a position to succeed the whole year.”

11:48am: The Nets have officially signed Smith to a two-way deal, the team confirmed in a press release.

10:34am: After waiving Alondes Williams on Thursday, the Nets are wasting no time in filling their open two-way contract slot. Brooklyn has agreed to sign G League guard Dru Smith to a two-way deal, according to Shams Charania of The Athletic (Twitter link).

Since going undrafted out of Missouri in 2021, Smith has played primarily for the Sioux Falls Skyforce, the Heat’s G League affiliate. The 25-year-old got a chance to make his NBA debut earlier this season when he earned a two-way deal with Miami, but he was waived in favor of Orlando Robinson, first in November and then again in December.

Although he only logged 67 total minutes in five NBA games in the fall, Smith has been a standout at the G League level for Sioux Falls. In 15 total NBAGL appearances (Showcase Cup and regular season) with the Skyforce, he has averaged 17.8 points, 5.7 assists, 5.6 rebounds, and 2.0 steals in 33.9 minutes per contest, with a shooting line of .485/.368/.750.

Players who sign two-way contracts before the season can be active for up to 50 games, but that limit is prorated for players who sign during the season. We’re at the halfway point of the 174-day NBA season, so if Smith signs within the next day or two, he’ll be eligible to be active for up to 25 games with Brooklyn. He also figures to spend time in the G League with the Long Island Nets.

January 20 is the date when all two-way contracts become guaranteed for the season, so Smith will lock in his rest-of-season salary (approximately $254K) if he remains with the Nets for more than a week.

The Heat have brought back center Orlando Robinson on a two-way contract and waived guard Dru Smith, the team announced (via Twitter).

Miami has switched the two players several times this season. Smith originally won a roster spot on a two-way deal, but he was waived in favor of Robinson on November 13 as injuries provided a need for more depth in the middle. Twelve days later, the Heat re-signed Smith to a two-way contract and unloaded Robinson to make room on the roster.

Robinson, a rookie out of Fresno State, appeared in two games during his first stint with Miami, averaging 7.0 points and and 4.5 rebounds in 20 minutes per night.

Smith saw limited playing time in five games, but made one start. He will likely rejoin Miami’s G League affiliate in Sioux Falls if he’s not claimed on waivers.

The Heat have waived two-way center Orlando Robinson and signed guard Dru Smith to fill his two-way spot, the team announced (via Twitter).

Just a couple of weeks ago, those roles were reversed, as Smith had made the opening night roster on a two-way deal but then was waived in favor of Robinson when the team’s frontcourt was hit hard by injuries.

Robinson, an undrafted rookie out of Fresno State, averaged 7.0 PPG, 4.5 RPG and 1.0 SPG in two games (20.0 MPG) with the Heat. If he goes unclaimed on waivers, he could be headed back to Sioux Falls.

5:53pm: Both moves are official, according to a team press release.

10:44am: The Heat are making a minor change to their roster, according to Ira Winderman of The South Florida Sun Sentinel, who reports (via Twitter) that the team will waive two-way player Dru Smith and sign Orlando Robinson to a two-way contract to fill the newly opened spot. 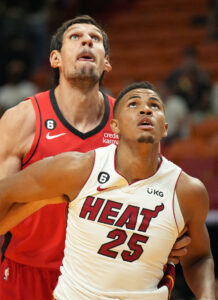 Both Smith and Robinson were in training camp with the Heat this fall. Smith earned a two-way spot at the end of the preseason, while Robinson was waived and eventually became an affiliate player for the Sioux Falls Skyforce, Miami’s G League team.

However, with center Omer Yurtseven expected to miss a significant chunk of the 2022/23 season due to ankle surgery, the Heat have a greater need in the frontcourt than on the wing. Robinson is a center; Smith is a shooting guard.

Miami does have an open spot on its 15-man standard roster and could sign a more experienced center to fill that opening, but doing so would put team salary above the luxury tax threshold for the season. Two-way contracts don’t count against the cap or tax.

Smith, who went undrafted in 2021 and played for Sioux Falls as a rookie, made his NBA debut last month, logging six minutes of garbage time during a blowout win over Portland on October 26. It was the only game he played in for the Heat.

Jamal Cain occupies Miami’s other two-way slot and should be unaffected by the Heat’s roster moves.

OCTOBER 13: The Heat have officially waived Garrett, Mulder, Robinson, and Bouyea, while converting Smith’s Exhibit 10 contract to a two-way deal, the team announced today in a press release.

OCTOBER 12: The Heat will convert Dru Smith to a two-way contract, tweets Shams Charania of The Athletic.

Miami plans to waive Marcus Garrett, Mychal Mulder, Orlando Robinson and Jamaree Bouyea, according to Tim Reynolds of The Associated Press (Twitter link). Mulder, Robinson and Bouyea are expected to join the team’s G League affiliate in Sioux Falls after they clear waivers. Garrett, who suffered a fractured right wrist, will stay in Miami to rehab the injury.

A 24-year-old shooting guard, Smith signed with Miami last year after going undrafted out of Missouri. He spent the season in Sioux Falls and was part of the Heat’s Summer League team.

After signing an Exhibit 10 contract with the Heat this offseason, Smith won the competition for a two-way deal with a strong preseason, including a 15-point performance Monday against the Rockets. In four games, he averaged 8.8 points, 2.3 rebounds and 2.3 assists in 17.3 minute per night.

Miami filled its other two-way slot on Sunday by converting Jamal Cain‘s Exhibit 10 contract. The Heat currently have 13 players on their roster with fully guaranteed contracts, plus Haywood Highsmith, who has a partially guaranteed deal.

Duncan Robinson is in the second year of a five-year, $90MM contract. The first year of the deal didn’t go well for the Heat swingman, as he lost his starting job late in the season and was the subject of numerous trade rumors.

Robinson is ready to hit the reset button, as shown by his 29-point outing against the Grizzlies on Friday, Anthony Chiang of the Miami Herald writes.

“Just based off of how last year went — lots to learn from, lots to grow from,” he said. “So just to be very discerning over what it is I want to take with me, what I want to take from the experience and how I can actually be resourceful and use it to better myself, better the team, better myself as a player.”

Robinson has worked on improving defensively and becoming a more diverse offensive player.

We have more on the Heat:

Smith went undrafted out of Missouri.

The Heat have waived Micah Potter, Javonte Smart, Dru Smith, and D.J. Stewart, per a team press release. All four players were on Exhibit 10 contracts.

All four players were undrafted rookies, and if they spend at least 60 days with the Heat’s G League squad, the Sioux Falls Skyforce, they could earn a bonus of up to $50K.

Potter, 6’10”, played two seasons with Ohio State before transferring to Wisconsin. He showed an impressive shooting touch for a big man, connecting on 38.6% of his three-point attempts and 84% of his free throws as a senior. He also had a strong preseason showing with the Heat, appearing in three games with averages of 10.3 PPG and 11.3 RPG in 24.0 minutes.

The moves leave the Heat with 14 players on guaranteed contracts and both two-way slots filled.

The Heat have added forward Micah Potter and guards Javonte Smart and Dru Smith to their training camp roster, according to a team press release.

Potter appeared in six Summer League games with Miami and averaged 7.3 PPG and 3.5 RPG. He went undrafted out of Wisconsin.

Smith, who attended Missouri, also appeared in six Summer League games with the Heat and averaged 8.0 PPG, 2.5 APG and 1.17 SPG.

All three were signed to Exhibit 10 deals, bringing Miami’s camp roster to 19, one below the limit, Barry Jackson of the Miami Herald tweets.

Exhibit 10 contracts give NBA teams a chance to bring players to training camp and get a look at them without guaranteeing them a regular season roster spot or any real salary. All three could potentially earn a $50K bonus if they remain on the Sioux Falls Skyforce roster for at least 60 days. The Skyforce are the Heat’s G League affiliate.

The trio could also be competing for Miami’s open two-way slot.