Health and confidence are the primary reasons Ben Simmons has performed well lately for the Nets, writes Brian Lewis of The New York Post.

After missing all of last season due to mental health issues and later a herniated disc in his back, which required surgery in May, Simmons had a slow start to the 2022/23 campaign, averaging just 5.2 points, 6.2 rebounds, 5.9 assists and 1.1 steals while shooting 44.4% from the floor and 46.7% from the line through nine games (27.3 MPG). He also missed five games while dealing with knee soreness and swelling.

“Healthy. Finally got his legs under him. He was off for two years. Y’all won’t even give him a chance. Y’all want to criticize him after every f–king game,” Markieff Morris said. “But the guy didn’t play two years. Obviously, y’all wouldn’t know, because none of y’all played in the NBA. He’s got to get his body right. There’s contact every night. Playing 30-plus minutes, it takes time.”

Simmons says he’s still working on finding consistency with his health and play.

“Yeah, I feel [the confidence]. I know who I am, I know what I’m capable of. I know what this team needs me to do, so I’m going to keep working and being consistent with my body and on the court,” he said.

Last season with the Clippers, center Isaiah Hartenstein served as a play-maker in the middle, averaging 4.7 assists per 36 minutes. According to Stefan Bondy of The New York Daily News, the Knicks sold Hartenstein on playing a similar role in New York when he joined the team in the offseason as a free agent.

However, so far this fall, Hartenstein is handing out a career-low 1.2 assists per 36 minutes and averaging just 0.8 seconds per touch (as opposed to 2.06 seconds per touch last season). The big man acknowledged on Wednesday that he has been asked to play more like a traditional center with the Knicks.

“It’s adjusting to a different role where it’s playing more like (the Knicks’ other centers), I guess. Not more of what I’m used to,” Hartenstein said. “That’s been a little more difficult. And so I’m just adjusting to more of a Mitch (Robinson) role, where I’m just rolling into the pick-and-roll.”

As Bondy relays, Hartenstein reiterated multiple times during his media session that he’s fine with making the adjustment, but said it has been a challenge and has required some extra film work to get comfortable.

It doesn’t help that the 24-year-old has been dealing with an inflamed Achilles tendon since the summer and still only feels “about 80 percent.” Hartenstein believes the issue is hindering his athleticism and may be having an impact on his defense and rebounding, according to Bondy.

When Robinson missed some time this month due to a knee injury, third-string center Jericho Sims entered the rotation and had some strong performances. With Robinson back, all three centers have played at least 13 minutes apiece in each of the Knicks’ past two games, but Bondy says head coach Tom Thibodeau typically prefers to use just two centers in his rotation, especially if he wants to try to get Julius Randle and Obi Toppin some minutes together.

Hartenstein, who signed a two-year, $16MM contract and has appeared in every game so far this season, may not end up being the odd man out, but he said he’s willing to accept a reduced role if the team wants to lean more on its traditional centers or use a two-power-forward look.

The Knicks‘ reluctance to gamble on a big move this summer has left them with an imperfect roster and no star power to lean on, writes Steve Popper of Newsday. New York is off to a 4-5 start, but the wins came against three rebuilding teams and the shorthanded Sixers, while the losses were to probable playoff teams built around All-Stars.

The offseason was defined by an unwillingness to meet Utah’s price for Donovan Mitchell, who was subsequently traded to Cleveland. Coach Tom Thibodeau was a strong advocate for making the Mitchell trade, according to Popper, who hears from an NBA source that the Knicks had bad intel and believed the Cavs weren’t willing to give the Jazz everything they wanted. Knicks executive Brock Aller argued against giving up three unprotected first-round picks for Mitchell, Popper adds.

The Knicks were also in position to outbid Atlanta for Dejounte Murray, Popper contends. He cites recent mistakes such as signing Evan Fournier in 2021 when Thibodeau preferred to keep Reggie Bullock and taking Obi Toppin ahead of Tyrese Haliburton in the 2020 draft.

Mitchell Robinson To Miss At Least One Week With Knee Sprain

Center Mitchell Robinson suffered a sprained right knee in Friday’s game, the Knicks announced (via Twitter). His condition will be reevaluated in seven-to-10 days.

Robinson was injured late in the first half against the Sixers. He limped to the locker room and was declared out for the rest of the game.

Robinson has played in all eight games so far and is averaging 6.5 points, 6.4 rebounds and 2.3 blocks per night. He is coming off a relatively healthy season, appearing in 72 games last year after being limited to 31 in 2020/21.

Isaiah Hartenstein, who started the second half Friday night, should see a larger role while Robinson is sidelined. The Knicks also used power forwards Julius Randle and Obi Toppin together against Philadelphia and may employ more of that small-ball lineup until Robinson returns.

If you’re wondering what the Nets superstars think of Ime Udoka, whom the team plans to hire as its head coach, SNY.TV’s Ian Begley previously reported that Kevin Durant is a huge fan of Udoka, which is why Durant was interested in playing for the Celtics after making his trade demand this summer, SNY’s Danny Abriano relays. When Udoka was an assistant with the Nets, he had no qualms about challenging Durant and Kyrie Irving and they respected his blunt style.

Cam Thomas‘ playing time dropped late last season and it doesn’t figure to spike upward with all of the Nets’ stars back in action this season, Brian Lewis of the New York Post notes.

“We’ll see how it goes after training camp. But he clearly is on a veteran team with a lot of guys who can play, have had a lot of success,” coach Steve Nash said. “We know Cam’s talented, and just trying to continue to develop him and see if he can keep pushing and getting better at certain things that’ll help him get minutes. I said whether he plays or he doesn’t play, he has to stay positive, he has to keep the belief that this process is going to help him.”

The Raptors were repeatedly tied to big-name trade candidates this offseason, rumored to be possible suitors for Rudy Gobert, Donovan Mitchell, and Kevin Durant. Toronto ended up having a relatively quiet summer, making only minor tweaks to its roster, according to Josh Lewenberg of TSN.ca, who says the club is counting on internal growth from its own players, including Rookie of the Year Scottie Barnes.

Still, while the Raptors didn’t take a big swing in the last few months, that doesn’t mean they’re not willing to make a major trade at some point to move closer to title contention. A league source tells Lewenberg that one situation the Raptors are “closely monitoring” is in Oklahoma City, in case Thunder star and Toronto native Shai Gilgeous-Alexander eventually seeks a change of scenery.

The Thunder have only won a total of 46 games in the last two seasons and appear headed for another lottery finish in 2022/23, but there’s no indication Gilgeous-Alexander is seeking an exit ramp out of town. He said this week that he knew what he was getting into when he signed a five-year extension with OKC a year ago and that he doesn’t think the team will keep losing for much longer.

The Knicks don’t view their newly announced signing of Jalen Brunson as an impediment to a potential pursuit of Jazz guard Donovan Mitchell, writes Jake Fischer of Bleacher Report. As Fischer explains, the team believes that the addition of Brunson is a “key ingredient” in its plan of adding a legitimate All-Star to the roster, since the former Maverick is the sort of table-setter and secondary scorer whom a star would want to play alongside.

While the Knicks have stockpiled a number of extra future draft picks, it remains to be seen whether or not they’ll be able to put together the sort of trade package the Jazz can’t refuse for Mitchell. As Mike Vaccaro of The New York Post writes, Utah would almost certainly push for New York to include former No. 3 overall pick RJ Barrett, who has All-Star upside.

Vaccaro argues that the Knicks should be willing to give up Barrett for a player like Mitchell, who is already an All-Star, but it’s unclear how significantly the Jazz value the former Duke standout, how inclined New York is to include him an offer, and how many more assets Utah would want in addition to Barrett.

JULY 12: The Knicks have officially signed Hartenstein, the team announced (via Twitter). 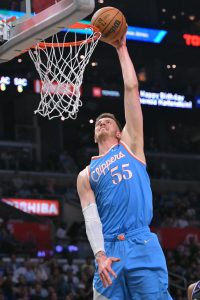 “We are very excited to welcome Isaiah Hartenstein to the Knicks family,” said Knicks president Leon Rose. “He’s a versatile big man who impacts the game on both sides of the floor and who plays with a passion and energy that is contagious.”

Hartenstein had been linked to the Knicks in the days leading up to free agency, with New York said to be in the market for a backup at the five. The expectation is that the team will still re-sign Mitchell Robinson as its starting center, though no agreement is in place yet.

With Serge Ibaka still rounding into form following offseason back surgery, Hartenstein emerged early in the 2021/22 season as the Clippers’ primary backup center and thrived in the role, making 62.6% of his shots from the field and handing out 2.4 APG in just 17.9 minutes per contest. He even flashed the ability to hit the occasional three-pointer (14-of-30) and played solid defense.

Hartenstein has played for four teams in four NBA seasons and has never earned more than the minimum, but his performance this past season put him in a good position to land a multiyear deal and a raise, which he’ll get in New York.

If the Knicks are able to turn their deal with Jalen Brunson into a sign-and-trade, there are scenarios in which they operate over the cap this offseason, in which case Hartenstein would be in line for a chunk of the mid-level exception. However, if the club goes below the cap and uses room, it will have enough to accommodate both Brunson and Hartenstein.

Jericho Sims has shown so far during the Las Vegas Summer League why the Knicks were willing to give him a new three-year deal this offseason, writes Zach Braziller of The New York Post. In addition to averaging a double-double (13.5 PPG, 10.5 RPG) in his first two Summer League games, Sims has displayed intriguing mobility and play-making ability, putting the ball on the floor and bringing it up the court himself after grabbing rebounds.

“I’ve been working on pushing the ball in transition a little bit, trying to get more comfortable doing that again, making the right reads,” he said, per Braziller.

Sims’ three-year contract is worth just $2,000 above the minimum in 2022/23, with minimum salaries in years two and three, per Fred Katz of The Athletic (Twitter links). Katz adds that the first year is fully guaranteed, while the second year is partially guaranteed for $600K and the third year is a team option with a partial guarantee of $651,180.