After giving fans the opportunity to see more of top prospect Victor Wembanyama by announcing that all of this season’s Boulogne-Levallois Metropolitans 92 games will be available to watch for free on the NBA app, the league is taking a similar path with consensus No. 2 prospect Scoot Henderson.

According to the NBA, a series of G League Ignite games will be available to stream for free on the NBA App this season. The league announced that Henderson and the Ignite will be featured on the app eight times in November and December during the NBAGL’s Showcase Cup, starting on Friday — the Ignite will host the Oklahoma City Blue – the Thunder’s affiliate – tonight in the season opener.

Neither Wembanyama nor Henderson is taking the traditional U.S. college route that most top picks have in the past, opening the door for the NBA to take unique steps to market two players who have the potential to become perennial All-Stars in the league within the next few years.

Here are several more odds and ends from around the basketball world:

Long Island Nets guard Bryce Brown is looking to be a steady contributor as he continues to eye his NBA dreams, he told Alec Sturm of NetsDaily in an exclusive interview.

Brown has averaged 15.2 points, 4.4 rebounds and 2.2 assists with Long Island this season, shooting 40% from the floor and 37% from three-point range. He signed training camp deals with the Knicks in 2020 and the Nets last year, but he hasn’t appeared in an NBA regular season game.

Vonleh, 26, was the ninth overall pick in the 2014 draft. Since entering the NBA, he has appeared in a total of 339 regular season games for Charlotte, Portland, Chicago, New York, Minnesota, Denver, and Brooklyn.

However, the 6’10” forward hasn’t been a regular rotation player for an NBA club since the 2018/19 season, when he averaged 8.4 PPG and 7.8 RPG in 68 games (25.3 MPG) for the Knicks. Vonleh was out of the NBA for most of 2020/21, having spent just a couple weeks in February with the Nets before being waived. He appeared in four games for Brooklyn.

For much of the offseason, the Chinese Basketball Association hadn’t permitted its teams to add foreign players due to coronavirus-related concerns. However, now that the league has opted to play its 2021/22 season in a bubble, foreign players will be allowed in the CBA.

Shanghai hasn’t wasted any time in taking advantage of the rule changes, having already agreed to a deal with ex-NBA wing Jamaal Franklin. Carchia reports that the Sharks are also expected to bring back former NBA lottery pick Jimmer Fredette, who has spent most of the last five seasons in Shanghai.

Former NBA lottery pick Jimmer Fredette has confirmed that he’ll rejoin the Shanghai Sharks in China for the 2020/21 season, announcing the news on Instagram.

Emiliano Carchia of Sportando first reported in July that Fredette would return to Shanghai, though at the time agent Chris Emens denied that there was an agreement in place between the two sides. Carchia indicated in July that the deal was expected to be worth $1.6MM.

The 10th overall pick in the 2011 draft, Fredette has appeared in a total of 241 NBA regular season contests, most recently seeing action in six games for the Suns in 2018/19. However, his NBA production has been modest and he has enjoyed greater success in the Chinese Basketball Association.

Fredette played for Shanghai from 2016-19, earning CBA All-Star honors three times and averaging approximately 37 PPG over those three seasons. He spent the 2019/20 season with Panathinaikos, averaging 12.9 PPG with a .417 3PT% in 27 EuroLeague games. Panathinaikos was crowned the Greek League champion when the season was shut down to COVID-19.

Since Fredette is still just 31 years old, another NBA comeback remains a possibility. But he has been able to play a greater role for teams in Europe and Asia while earning salaries comparable to the NBA’s minimum, so it wouldn’t be a surprise if he finishes his career overseas.

JULY 30: Fredette’s agent Chris Emens tells Sportando that there’s no agreement in place yet between Fredette and the Sharks.

“We are speaking to many clubs looking for a solution for the 2020/21 season. No such agreement has been reached,” Emens said. “We could not even consider such an agreement in China until after they rule whether or not import players will be allowed.”

According to Carchia, Sportando’s sources continue to insist that Fredette will sign with the Sharks as long as foreign players are permitted in the CBA next season.

JULY 29: Former sharpshooting BYU phenom Jimmer Fredette is set to return to the CBA’s Shanghai Sharks for $1.6MM, according to Emiliano Carchia of Sportando.

Fredette played for the Sharks from 2016-2019, and was a three-time CBA All-Star with the club. The length of the contract has not yet been announced, but Fredette was previously compensated to the tune of $1.8MM annually by the Sharks, so this may be a one-year contract.

Following his 2019 season with the Sharks, Fredette suited up for six games with the Suns during the end of the 2018/19 regular season — his last NBA action as of this writing.

After his tenure in Phoenix, Fredette returned abroad, joining Greek team Panathinaikos for the club’s 2019/20 season. He averaged 13.2 PPG while shooting 52% from the field, 49% from three-point range, and 92% from the free-throw line across 45 games. Fredette’s Panathinaikos squad was named the 2020 Greek League champion. He has also played in the summer winner-take-all event The Basketball Tournament stateside since 2017.

After the Kings, Fredette had brief stints with the Bulls, Pelicans, and Knicks before first seeking opportunities overseas. In the NBA, Fredette boasts a career 37.2% three-point percentage on 2.2 attempts per contest.

Although the coronavirus continues to spread through the league, the NBA hasn’t given any thought to canceling its season, according to Pelicans executive vice president David Griffin (Twitter link from Will Guillory of The Athletic). Griffin made the comment tonight on the team’s Twitter feed during a rebroadcast of a game from earlier this season.

The number of NBA players testing positive for the virus grew from two to 10 over the past week. Three members of the Sixers organization and a member of the Nuggets organization have also tested positive.

Griffin’s comment meshes with a statement by NBA commissioner Adam Silver earlier this week that he remains optimistic that the season will be concluded in some form.

JULY 15: Fredette has officially signed with Panathinaikos, the Greek team announced today in a press release. Fredette published an Instagram post confirming his move to Greece and thanking fans for their support.

JULY 10: According to Nikos Varlas of Eurohoops, sharpshooting guard Jimmer Fredette has reached a two-year deal with Panathinaikos of the Greek Basket League and EuroLeague.

As Varlas notes, this will be the first European team Fredette plays for in his professional career. He also played in China from 2016 to 2019, becoming somewhat of a Chinese sensation before signing a two-year contract with the Suns back in March. The second year had a team option, which Phoenix declined back in June.

After his option was declined, Fredette briefly played with the Warriors’ summer league team, but left the team early so as not to get injured while he contemplated his overseas options in response to several foreign teams contacting his representatives about his availability.

Given how quickly most of the top players came off the market, Holiday represents one of the more intriguing options available, given his ability to knock down three-pointers (1.8 3PG on 35.4% shooting over the last three years) and defend on the perimeter.

According to Scotto, the Grizzlies are open to the idea of accommodating a sign-and-trade deal involving Holiday, so a team with interest in him could potentially acquire him using a trade exception if it doesn’t want to cut into its mid-level.

Jimmer Fredette has left the Warriors‘ Summer League team to make sure he doesn’t get injured while he sifts through his options overseas, according to Mark Medina of The San Jose Mercury News.

Fredette, 30, accepted the Summer League opportunity with Golden State after playing six games for the Suns at the end of the season. He has been a star in China for the past three years, setting several scoring records and collecting a CBA International MVP award.

“He still can play. I think he should still play,” said Aaron Miles, the Warriors’ Summer League coach. “I should say this – I think he should do whatever he feels is best for him and his family. I know a lot of times as you get older, sometimes it’s more mental than physical. But I don’t know his situation. I don’t know what the reasoning behind it. But he definitely has a lot of basketball left.”

Fredette averaged 9.5 PPG and 20.5 minutes of playing time in two games in the California Classic League. However, the Warriors are more concerned with developing their draft picks, Jordan Poole, Eric Paschall and Alan Smailagic, along with second-year guard Jacob Evans and fourth-year center Damian Jones.

A source tells Medina that Fredette decided to leave the league after several foreign teams contacted his representatives about his availability.

A prolific scorer at BYU, Fredette had a journeyman NBA career after being selected with the 10th pick in the 2011 draft. After spending his first two and a half seasons with the Kings, he had short stays with the Bulls, Pelicans and Knicks before leaving the league in 2016.

As expected, the Suns will decline Jimmer Fredette‘s team option for the 2019/20 season, reports Shams Charania of The Athletic (via Twitter). The option would have paid Fredette a salary of $1,988,119 if it had been exercised, per Basketball Insiders. 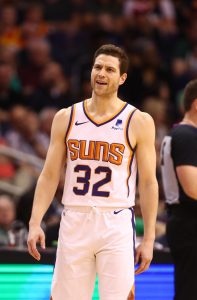 Warriors assistant GM Larry Harris confirmed earlier today that Fredette would be a part of Golden State’s Summer League roster in July. It wouldn’t have been possible for the former BYU standout to play for the Warriors in Summer League if he were still under contract with Phoenix.

Fredette, 30, returned to the NBA near the end of the 2018/19 campaign after spending multiple seasons in China. The sharpshooter struggled in six games with Phoenix down the stretch, averaging 3.7 PPG on 27.6% shooting in six games (10.8 MPG). He missed all 13 of his three-point attempts.

Fredette had been lighting up in China in recent years, putting up massive scoring numbers for the Shanghai Sharks. While he has never developed into a particularly effective NBA rotation player since being drafted 10th overall in 2011, his Summer League agreement with the Warriors suggests that he’s going to keep trying to make his way onto an NBA roster for 2019/20.