The NBA officially unveiled the 28-player pool for this year’s Rising Stars event on Tuesday, making the announcement via the NBA App. The following players made the cut:

As was the case last season, the Rising Stars event will consist of four teams and three games. The seven G League players will comprise one team, coached by longtime NBA guard Jason Terry. The other 21 players will be drafted to three squads coached by former NBA stars Pau Gasol, Joakim Noah, and Deron Williams.

All three contests will take place on Friday, February 17 as part of All-Star weekend in Salt Lake City. The NBA’s full press release with more information on the event can be found right here.

The backcourt pairing of Shai Gilgeous-Alexander and Josh Giddey has looked much smoother in its second season together, writes Joe Mussatto of The Oklahoman. The Thunder‘s young guards were still working out ball-handling responsibilities when Giddey suffered a season-ending hip injury last February. They’ve learned how to complement each other this year and are a major part of why OKC is in the playoff race at 23-24.

“When you’ve got two guys that really want to get it right, it’s less about their games, it’s less about their fit,” coach Mark Daigneault said. “It’s more about, do the players want to work to get right? And in this particular case we have an entire team, it’s not just limited to Josh and Shai, (of) guys that want to get it right. I think that’s what you’re seeing over time.”

Giddey is averaging 16.0 PPG in his second NBA season and has become more dependable as an outside shooter, raising his three-point percentage from 26.3% to 32.8%. He’s also taking advantage of the opportunities created while defenses focus on Gilgeous-Alexander, who ranks fifth in the league in scoring.

“Shai could have 40 points every night if he wanted to,” Giddey said, “but he’s unselfish, he gets off the ball, he makes players around him better.”

The Thunder are often pointed to as an example of a team boldly and blatantly tanking, yet they were in the playoffs just three years ago. In the past two seasons, they’ve gone 22-50 (tied for the fourth-worst record) and 24-58 (fourth-worst outright).

Entering 2022/23, external expectations were low. Oddsmakers had their over/under win total at 22.5, and 54.2% of our voters took the over — not exactly a resounding majority, but a majority nonetheless.

As ESPN’s Zach Lowe writes (Insider link), Oklahoma City has been on fire lately, going 11-5 over the last 16 games. At 22-23, the Thunder are now in a virtual tie for the No. 7 seed in the West with the Timberwolves, Clippers and Warriors, and only trail the Jazz by a half-game for the No. 6 spot.

They are now 12th in the league with a plus-1.1 net rating, per NBA.com, with the league’s 10th-ranked defense. Lowe believes the Thunder are “in the play-in race to stay,” and thinks they might be a playoff team for years to come if they’re able to slide in this year.

Star guard Shai Gilgeous-Alexander, a prime candidate to be a first-time All-Star, has led the way. But the Thunder have talented players across the roster, and have found success with a rangy, switchable lineup featuring Gilgeous-Alexander, Josh Giddey, Luguentz Dort, rookie wing Jalen Williams, and Kenrich Williams or Mike Muscala at center.

“He’s definitely physical in driving,” head coach Mark Daigneault said. “That’s definitely showing up. Early in the year, I thought he was just trying to shoot over people, and now he’s taking space up. Then when he creates that kind of space and his size and strength, he’s getting stuff around the basket. He’s getting a lot more lately.”

The Thunder have a treasure trove of draft assets at their disposal, and their recent second overall draft pick, big man Chet Holmgren, hasn’t even played yet (he’s out for the season with foot surgery). Things are definitely trending up in Oklahoma City.

We want to know what you think. Do you agree with Lowe that the Thunder will be in the West’s play-in hunt for the rest of the season? Head to the comments and share your thoughts on the Thunder’s outlook for the second half of ’22/23.

Mavericks owner Mark Cuban hopes Kemba Walker can be a dynamic offensive presence for the team, as he told Brad Townsend of The Dallas Morning News (Twitter link).

“We wanted to add some flexibility to our offense,” Cuban said. “Like last year at this point, we have great shot quality, particularly from the three, but we have struggled to make enough of them. Kemba will give (head coach Jason Kidd) more offensive flexibility.”

Townsend adds (via Twitter) that Walker’s contract, which hasn’t been officially signed yet, will be for the veteran’s minimum, as that’s all the Mavericks have to offer — they’re over the salary cap and used their taxpayer mid-level exception to sign JaVale McGee and give second-rounder Jaden Hardy a three-year deal.

Here’s more from the Southwest:

The Thunder have picked up third-year options for guards Josh Giddey and Tre Mann and a fourth-year option for forward Aleksej Pokusevski, the team announced in a press release.

Giddey, the sixth pick in last year’s draft, is now locked into a $6,587,040 salary for the 2023/24 season. He was a member of the All-Rookie Second Team last season and was named Western Conference Rookie of the Month four times. He averaged 12.5 points, 7.8 rebounds and 6.4 assists in 54 games before a hip issue ended his season in February.

Timberwolves star Karl-Anthony Towns doesn’t expect to have any issues shifting from center to power forward when he plays alongside new teammate Rudy Gobert in 2022/23. As Towns tells Colin Ward-Henninger of CBS Sports, playing at the four is something he has gotten accustomed to doing over the course of his career.

“The last time I had something like this, obviously I had Gorgui Dieng, I played (power forward) a lot of years in the NBA. Fans forgot that. It’s OK,” he said. “And go back to me in college. This is how I played in college. Willie Cauley-Stein is like 7’2″. I don’t know what they’re missing in that.”

While Towns is far from the league’s most effective perimeter defender, he said he’s looking forward to the challenge of taking on those assignments. The All-NBA big man added that he expects talent to win out as he and Gobert attempt to develop chemistry. 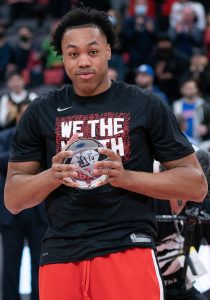 Barnes, Cunningham and Mobley were all unanimous selections, receiving the maximum total of 200 points each. Wagner received 183 points, followed by Green with 158. Strangely, one media member left Wagner off their ballot completely, as he received 99 of 100 possible votes.

Raptors wing Barnes, who narrowly edged Cavaliers big man Mobley for the Rookie of the Year award, ranked third in points (15.3) and rebounds (7.5) among all rookies, and fifth in assists (3.5). Mobley was fifth in points (15.0) and led all first-year players in rebounds (8.3) and blocks (1.67) per game.

Pistons guard Cunningham, the No. 1 pick in the 2021 draft, was first among rookies in points (17.4), second in assists (5.6) and fifth in rebounds (5.5). Magic forward Wagner also had a great year, averaging 15.4 points (fourth among rookies), 4.5 rebounds and 2.9 assists in 79 games. Rockets guard Green finished the season strong, scoring 20+ points in 17 of his last 25 games on his way to averaging 17.3 points, second among first-year players.

Pelicans defensive ace Herbert Jones (123 votes) and Thunder floor general Josh Giddey (122 votes) headline the Second Team. Jones averaged 9.5 points, 3.8 rebounds and 1.7 steals (first among rookies) and should at least receive votes for an All-Defensive nod, even if he doesn’t end up making one of the two teams.

In addition to averaging 12.5 points, Giddey was second among rookies in rebounds (7.8) and first in assists (6.4), but he only appeared in 54 of 82 games, having missed the final 23 contests with a hip injury, which is likely why he didn’t receive more First Team votes.

Here are both All-Rookie teams in full, with their voting point totals noted in parentheses. Players received two points for a First Team vote and one point for a Second Team vote.

Ten other rookies received votes — you can view the full voting results right here. Among the group that missed the cut, Warriors forward Jonathan Kuminga (47) was just behind Duarte, with Kings guard Davion Mitchell (28) the only other player receiving a significant number of votes.

The Thunder are interested in reaching contract extension agreements with Luguentz Dort and Darius Bazley but only if the price is right, GM Sam Presti told The Oklahoman’s Joe Mussatto and other media members on Monday.

“They’re both great guys,” Presti said. “I want to hear what they’re thinking, and I need them to understand we have to also balance the interest of the team as well.”

“We’ll definitely have a conversation on that,” Presti said. “I don’t know when those conversations will pick up. We’ll have some different options. I don’t want to get into all of them.”

Here are some other highlights from Presti’s annual end-of-season press conference, via Mussatto:

Josh Giddey Out For Rest Of Season

Coach Mark Daigneault made the announcement during a session with reporters before tonight’s game. Giddey hasn’t played since February 24, and Daigneault said the “return-to-play portion” of his rehab process would last longer than the two weeks that are left in the regular season. Giddey told the team that he has never experienced problems with the hip before, Daigneault added.

“It’s a tricky injury,” Daigneault said. “A little unpredictable, whereas Jeremiah Robinson-Earl is a bone, a break, it’s more predictable.”

Giddey, the sixth player selected in last year’s draft, will end his first season with averages of 12.5 points, 7.8 rebounds and 6.4 assists in 54 games. He was selected to participate in both the Rising Stars tournament and the Skills Challenge at All-Star Weekend and was named Western Conference Rookie of the Month four times.

Thunder rookie Josh Giddey will miss at least two more weeks due to hip soreness, head coach Mark Daigneault said, according to Joe Mussatto of The Oklahoman (Twitter link). Giddey has missed the team’s last four games, but Daigneault still hopes the 19-year-old can return at some point this season.

“We’re trying to balance development but also being cautious and being wise… We’re learn a lot more in a couple weeks here,” he said, as relayed by Clemente Almanza of OKC Thunder Wire (Twitter link). “See how he responds with the treatment he’s getting now.”