Kyle Kuzma has been a hot name on the trade market, though the latest reports have indicated that the Wizards would prefer to keep him through the deadline in an attempt to re-sign him in free agency. The 27-year-old forward says he loves playing with Kristaps Porzingis and Bradley Beal, and that will factor into his decision this summer.

“It plays into it a lot,” Kuzma told Michael Scotto of HoopsHype (Twitter video link). “I love playing with those guys. I see how easy it is for me, but this is something I’m not really thinking about right now. I’m so far away from it.”

Second-year Hornets players James Bouknight, Kai Jones and JT Thor are hoping to enjoy more responsibilities with Charlotte this season, per Rod Boone of The Charlotte Observer. Boone notes that this triumvirate of reserves needs to be prepared when new (returning) head coach Steve Clifford calls their number.

“We’ve talked about the potential of the team,” Jones said. “The biggest thing for us is always just being workers. We talk about that all the time, getting your extra in, coming in whenever you can — early morning, late at night — to be the player that you can be. Fulfill your potential.”

Bouknight reflected on the areas of his game he has been building out during the offseason.

“Just working over the summer on making the right reads on the weak side, passing the ball, playing with my size, playing on the defensive end,” he said. “I just think I’m capable of doing everything on the court, honestly.”

There’s more out of Charlotte:

After finalizing his new four-year, maximum contract extension over the weekend, All-NBA Heat swingman Jimmy Butler spoke about why he wanted to commit to Miami long-term, according to Anthony Chiang of the Miami Herald.

“They allow me to be me here, love who I am as a person and player,” Butler said of the Heat organization. “Love the guys I have an opportunity to hoop with. I think we’ll be a really good team. We’re consistently getting better, adding the right amount of vets to get over the hump and win a championship. It means everything to me to represent this great organization.”

Butler, who turns 32 in September, said that he wants to finish his career in Miami.

“It’s a place for me,” Butler said. “Teammates allow me to be me. When I’m wrong, they’re going to tell me I’m wrong. When I’m right they still probably tell me I’m wrong. I love them for that. Blessing to play with these guys and [head coach Erik Spoelstra] and [team president] Pat Riley.”

A four-time All-NBA selection, five-time All-Star, and five-time All-Defensive Team member while with the Bulls, Timberwolves and Heat (he did not earn any of these honors with his other NBA team, the Sixers), Butler showed no signs of slowing down during the 2020/21 regular season. He averaged 21.5 PPG on 49.7% shooting from the field and 86.3% from the free-throw line, as well as career-best averages of 7.1 APG, 6.9 RPG, and 2.1 SPG.

The Hornets have signed second-round draft pick JT Thor, according to a team press release.

Thor, a 6’9” forward, was officially acquired from the Pistons along with center Mason Plumlee on Friday in exchange for the draft rights of Balsa Koprivica.

Terms of the contract are undisclosed, but the club is under the cap and has the ability to give him a starting salary worth more than the rookie minimum and/or a contract that covers more than two years.

Thor, the 37th overall pick, averaged 9.4 PPG, 5.0 RPG and 1.4 BPG in his lone season with the Tigers. Thor projects to spend most of his rookie season in the G League.

AUGUST 6: The trade is now official, according to press releases from both the Hornets and Pistons. Charlotte received Plumlee and the rights to No. 37 pick JT Thor in exchange for the rights to No. 57 pick Balsa Koprivica. 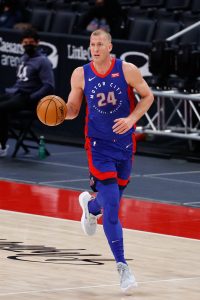 JULY 29: The Pistons and Hornets are finalizing a trade that would see Mason Plumlee sent to Charlotte along with the No. 37 pick in tonight’s draft in exchange for the No. 57 pick, reports ESPN’s Adrian Wojnarowski (via Twitter).

The Hornets had been expected to be one of the NBA’s most aggressive teams in pursuit of a center this offseason and will get an early start on addressing that position by acquiring Plumlee, who averaged 10.4 PPG, 9.3 RPG, and 3.6 APG in 56 games (26.8 MPG) during his first and only season as a Piston.

Even at close to $9MM, Plumlee’s deal isn’t particularly onerous, especially since it’s only partially guaranteed in 2022/23. So it’s somewhat surprising that the Pistons were willing to drop down 20 spots in the draft to move off of it, especially since GM Troy Weaver just signed Plumlee to that deal last offseason.

Still, Detroit will gain cap flexibility as a result of the trade and could open up about $20MM in space rather than operating over the cap this summer, tweets Nate Duncan. The move will also create additional playing time for promising young big man Isaiah Stewart.

The deal will have to be completed once the new league year begins, when the Hornets can take Plumlee into their cap space. They’ll still have about $13MM in projected cap room, according to Marks, so they could pursue another center in free agency.

It’s possible that Timberwolves third-year wing Jarrett Culver could be available this offseason for a second-round pick, according to a tweet from Darren Wolfson of SKOR North.

Not only has Culver had trouble carving out a role for himself with the Timberwolves, but between last year’s No. 1 pick Anthony Edwards and Malik Beasley, who was signed to a four-year deal last summer, there’s little room on the wing for the 22-year-old to get developmental reps.

The Wolves are only two years removed from trading Dario Saric and the No. 11 pick to Phoenix in order draft Culver with the sixth overall pick, so the idea that they may be willing to settle for a second-round pick is discouraging. But it doesn’t take long for a prospect’s value to decline if he isn’t taking positive strides forward — even if he was a lottery pick.

We have more news from around the Western Conference:

After winning a title with the Bucks this week, free agent forward P.J. Tucker seems unlikely to pursue another with the Nets, according to NetsDaily.com. The Athletic’s Alex Schiffer has indicated the Nets were interested in the veteran forward even before the James Harden trade and Tucker is also good friends with Harden and Kevin Durant. However, Brooklyn will likely be limited to the taxpayer mid-level exception and Tucker is expected to command more in the open market. Milwaukee also holds Tucker’s Bird rights and wants to retain him despite luxury tax concerns.

We have more on the Nets and Knicks:

Following up on Shams Charania’s report that the Knicks have been the most aggressive trade suitor for Collin Sexton so far, Marc Berman of The New York Post confirms that the team has the Cavaliers guard on its trade radar.

According to Berman, the Knicks would’ve picked Sexton over Kevin Knox in the 2018 draft if he had slipped to No. 9 instead of being selected at No. 8. Berman adds that Knicks forward Obi Toppin, who played his college ball at Dayton, may be a player the Cavs would target in a trade.

A source tells Berman that the Knicks – who hold the 19th and 21st overall picks – are open to trading out of the first round entirely in order to acquire an “established player.” Sexton has certainly established himself as a talented scorer, having averaged 24.5 points per game in 2020/21, though it’s unclear if New York would be willing to offer both of its first-round picks in a package for him.

The Hornets worked out seven draft prospects on Friday, headlined by UConn guard James Bouknight, P.J. Morales of the Charlotte Observer writes. Bouknight is rated as the No. 8 overall prospect on ESPN’s Best Available list. Auburn guard Sharife Cooper (No. 18 on ESPN’s list), Tennessee guard Jaden Springer (No. 27), and Auburn forward JT Thor (No. 28) were some of the other potential first-rounders who visited. The group also included Iowa center Luka Garza, Howard center Makur Maker, and Croatian forward Roko Prkacin (No. 37).

There’s a belief that the Pelicans won’t be especially eager to add another rookie to an already young roster, according to Jonathan Givony of ESPN (Insider link), who says the No. 10 pick in next month’s draft, currently held by New Orleans, is considered one of the most available in the lottery.

Within his latest mock draft, Givony also provides some intel on some other picks at the top of the draft, confirming that the Pistons are looking hard at Jalen Green and Evan Mobley, though most executives anticipate they’ll select Cade Cunningham. According to Givony, NBA teams don’t have a good feel for which direction the Rockets will go at No. 2, since the new front office doesn’t have an extensive track record. For now, Givony believes Green would be the pick for Houston over Mobley.

Here’s more on the 2021 NBA draft, which is exactly one month away: