The Celtics will have star forward Jayson Tatum on the court for tonight’s showdown with the Mavericks, according to Souichi Terada of MassLive.

Tatum was listed as questionable after hurting his left ankle in Monday’s game at Chicago, but coach Joe Mazzulla told reporters that he’ll be able to play without any limitations. Tatum appeared to be moving normally during shootaround, Terada observes.

Tatum is among the early favorites in the MVP race, averaging 30.2 points, 7.6 rebounds and 4.6 assists while playing 37.2 minutes per game, the most in his career. He has led Boston to the best start in the league at 13-4.

Clippers star forward Paul George missed Monday’s game against Utah due to a right hamstring tendon strain, according to Law Murray of The Athletic.

It’s a different injury than the one the team cited when George sat out the second half of Saturday’s game against San Antonio. The reason given that night was right knee soreness.

George will be reevaluated in the next couple of days.

Mavericks star Luka Doncic will represent Slovenia next summer at the FIBA World Cup, according to Johnny Askounis of Eurohoops. Doncic has become a regular in international competitions, so the news isn’t surprising, but it was made official by Basketball Federation of Slovenia president Matej Erjavec.

“Luka confirmed his participation a minute after the game with Germany, when it was certain that we would go to the championship,” Erjavec said in an interview with RTV, the country’s national public broadcaster. “To be very honest, we were actually 99% sure already after the game against Israel and even then, it was a great joy and a reassurance at the same time. If Luka is healthy, there is no fear at all.”

Doncic has played for the national team since 2017 when Slovenia won the gold medal at EuroBasket, and he was a standout at the most recent Olympics. The 32-team World Cup will take place from August 25 to September 10 in the Philippines, Japan and Indonesia.

“The club, led by coach Jason Kidd and owner Mark Cuban, approves of this approach,” Erjavec added. “They approve of his participation.”

DJ Steward‘s new deal with the Kings is a one-year, minimum-salary contract, but it doesn’t include Exhibit 10 language, Hoops Rumors has learned. It’s a standard contract that features a small partial guarantee worth $50K.

If Steward is eventually waived, he would still be eligible to play for the Stockton Kings, Sacramento’s G League affiliate, since his guarantee doesn’t exceed $50K. So the most tangible difference between Steward’s deal and an Exhibit 10 contract is that Sacramento won’t have the option of converting it into a two-way contract. The former Duke guard isn’t ineligible to sign a two-way deal with the Kings, but he would have to pass through waivers first.

7:41pm: The Mavericks have officially announced Kleber’s extension (via Twitter). 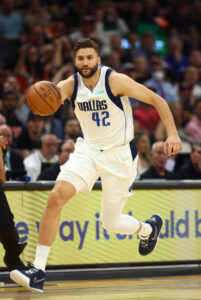 9:04am: The Mavericks are finalizing a three-year extension with forward Maxi Kleber, according to Shams Charania of The Athletic, who reports (via Twitter) that Kleber’s new contract will be worth $33MM.

Kleber is set to earn $9MM in 2022/23, the final season of the four-year, $34MM deal he signed with Dallas during the 2019 free agent period. His new agreement with the team, which will bump his average annual salary to $11MM, will extend his contract through the 2025/26 season.

An undrafted free agent from Germany, Kleber has spent the last five seasons with the Mavericks. He has appeared in 326 regular season games during that time, starting 136 of them and averaging 7.1 PPG and 4.8 RPG on .446/.359/.796 shooting in 22.7 minutes per contest.

Kleber, 30, saw his shooting percentages drop off noticeably in 2021/22, as he made just 39.8% of his shots from the floor, including 32.5% of his threes. However, Dallas’ new financial commitment to him suggests the team is confident he’ll bounce back in ’22/23.

With Spencer Dinwiddie‘s and Reggie Bullock‘s salaries for 2023/24 not yet fully guaranteed, there might have been a path for the Mavs to create some cap flexibility next summer. However, their deal with Kleber signals they’re fully preparing to operate over the cap again, even with Christian Wood and Dwight Powell still on expiring deals.

Kleber will become one of three Dallas players under contract through at least ’25/26, joining Luka Doncic and Dorian Finney-Smith, who holds a player option for that year.

Because Kleber’s extension will exceed the NBA’s extend-and-trade limits, he’ll be ineligible to be dealt for six months after his signing date. Even if the two sides finalize the agreement shortly, that six-month window will extend into March, well past the 2023 trade deadline, so Dallas won’t be able to move him until next offseason.

Kleber is set to become the 10th player to sign a veteran contract extension so far this offseason, as our tracker shows.

The Mavericks plan to retain Frank Ntilikina beyond Monday, fully guaranteeing him the $2MM he’s owed in 2022/23, according to veteran NBA reporter Marc Stein (via Twitter).

Ntilikina, who has a July 4 guarantee date on his contract, appeared in 58 games last season, averaging 4.1 points, 1.4 rebounds and 0.5 steals in 11.8 minutes. Ntilikina continues to intrigue teams because of his defense. Offensively, he hasn’t shot over 40% in any of his five NBA seasons.

Dallas is gearing up for another playoff run next year. The team traded for star big man Christian Wood this offseason, pairing Luka Doncic with a frontcourt presence to compete in the West.

Maxi Kleber remains a big part of the Mavericks’ plans despite the impending acquisition of Houston’s Christian Wood, Tim MacMahon of ESPN tweets. Kleber’s $9MM salary isn’t guaranteed until July 4, but that is considered a formality, according to MacMahon. Kleber, who has been a rotation player for Dallas for the past five seasons, projects as Wood’s backup if Dwight Powell is moved this offseason.

The Mavericks bounced back in Friday night’s Game 3 with a 103-94 victory over the Suns, writes Tim MacMahon of ESPN. Jalen Brunson, who struggled in the first two games of the series, scoring a combined 22 points on just 9-of-28 shooting, led the way with a game-high 28 points on 10-of-21 shooting.

“I kind of found myself playing with a little bit more hop in my step, getting to spots quicker and making decisions faster,” Brunson said. “Decisions came from me just being aggressive. My teammates just kept giving me confidence to go make plays, and I just kept doing that. … I found a way to bounce back tonight, but I just can’t be satisfied with this.”

“The first or second possession, he was diving on the floor,” Dorian Finney-Smith said of Doncic. “When you see the best player do that, it kind of sets the mood.”

“I knew I had to do better,” said Doncic, per MacMahon. “I knew I could do better. I think I made a big jump on defense this year. The second half (of Game 2) was horrible by me, and I knew I had to get back to my team and play better defense.”

Mavericks point guard Jalen Brunson, an unrestricted free agent this summer, scored a career-high 41 points during the Mavericks’ 110-104 Game 2 victory over the Jazz Monday night, as Tim MacMahon of ESPN writes. The win knots Dallas’ first-round series with Utah at 1-1.

“I know he’s dying to get out there soon, but he’s got to take his time,” Brunson said of his backcourt mate. “I know he’s doing everything in his power to not let his team down, but he has to make the decision that’s best for him. Not necessarily knowing where he is [in the recovery process], but I just know that he’s a competitor and he wants to be out there. We’re trying to hold it down for him.”

In an appearance on ESPN’s Get Up on Thursday morning, Brian Windhorst said that there’s a real chance Ben Simmons could make his Nets debut at some point during the team’s first-round series vs. Boston (video link).

“I am told that Ben Simmons is targeting Games 4, 5, or 6 for making his Brooklyn Nets debut,” said Windhorst, who added that he was “taken aback” when he received that information. “My response was, ‘Is he even playing 5-on-5 yet?’ And the answer to that is no, but the hope is by the end of the week he can ramp up to that.

“… It’s a big ask, but I have to say that really for seven (or) eight weeks now, I’ve heard nothing but pessimism on the Ben Simmons front and that has switched dramatically in the last few days.”

Shams Charania of The Athletic has also reported that a first-round return is a possibility for Simmons. When asked on Wednesday about Charania’s report, head coach Steve Nash pumped the brakes a little, telling reporters that there’s still no set timeline for Simmons’ debut. However, Nash did say the three-time All-Star has been making “heavier progress” in the last week, according to Brian Lewis of The New York Post.

“He’s moving more, he’s shooting, he’s starting to move a little bit on the court in a one-on-zero environment,” Nash said. “So definitely positive signs that it’s improving and moving and all those things. But like I said he hasn’t been running full speed or playing against anybody, so still a lot more markers to meet.”