Trendon Watford Out At Least A Week With Leg Injuries

Trail Blazers forward Trendon Watford suffered a pair of leg injuries Saturday night that could result in an early end to his rookie season, writes Aaron Fentress of The Oregonian.

The team announced that Watford has a hyperextended left knee and a bone bruise in his left leg, and his condition will be re-evaluated in a week. With just two weeks left in the regular season and little chance to reach the play-in tournament, Portland may decide to play it safe with Watford.

The injury occurred late in Saturday’s game against Houston when Watford stepped on Dennis Schröder‘s foot while driving to the basket. He collapsed to the court, and teammates and coaches had to help him to the locker room.

Watford, who led the team with 15 points and 10 rebounds, has been a pleasant surprise in a lost season in Portland. He signed a two-way contract with the Blazers in August after going undrafted out of LSU and had that converted to a standard deal in February. He has appeared in 48 games, starting 10, and is averaging 7.6 points and 4.1 rebounds per night.

Rudy Gobert still believes in Utah’s title chances this season, even if most of the league has counted the Jazz out, as Sarah Todd of the Deseret News relays.

“It’s about embracing the wins and the losses, and I believe in our group,” Gobert said. “I really believe that we can accomplish our goal. … Everything that we’ve been through only helped us grow and have prepared us even for that moment when it comes. I’m excited for the second part of the season and I know that we’re going to be ready to make a push.”

Todd points out that the Jazz have struggled against top-tier teams this season, blowing multiple big leads, and if they truly want to compete for a championship, they can’t afford those types of mental lapses.

“We’ve got to learn quickly,” coach Quin Snyder said. “Start developing the ability to push the lead as opposed to essentially giving it back.”

The Jazz don’t have the luxury of an “on-off” switch, they need to be “on” all the time in order to prepare for a postseason push, and Todd believes that level of consistency has been lacking this season.

1:40pm: Watford’s promotion and Smith’s release are now official, according to an announcement from the Trail Blazers. Portland now has an open two-way slot. 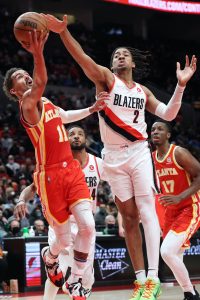 11:40am: The Trail Blazers have reached an agreement on a deal with rookie forward Trendon Watford that will promote him from his two-way contract to the 15-man roster and give him a new four-year contract, reports ESPN’s Adrian Wojnarowski (via Twitter).

According to Wojnarowski, Portland will waive guard Dennis Smith Jr. in order to create an opening on the 15-man roster for Watford. Smith is currently sidelined due to an elbow injury.

Watford’s new four-year contract will be worth $5.8MM, says Wojnarowski. The Blazers will dip into their mid-level exception in order to go up to four years and to give the 21-year-old a salary worth a little more than the prorated minimum for the rest of 2021/22 — the remaining three years will be worth the minimum. Additionally, the final two seasons of the deal will be non-guaranteed, according to Woj.

Watford, who went undrafted out of LSU in 2021, quickly caught on with the Trail Blazers on a two-way deal and was one of the very first players to officially sign a contract once the ’21/22 league year started in August.

Watford began the season out of the rotation and didn’t play double-digit minutes in a game until January 3, but he has appeared in every one of Portland’s games since then. In 24 games since the calendar flipped to 2022, he’s averaging 5.5 PPG and 3.9 RPG on 60.4% shooting in 15.5 minutes per contest. We identified him last week as one of the players on two-way contracts who was a candidate for a promotion.

Smith, 24, signed a non-guaranteed contract with Portland in the 2021 offseason and won a roster spot in training camp. He appeared in 37 games for the team, averaging 5.6 PPG, 3.6 APG, 2.4 RPG, and 1.2 SPG in 17.2 minutes per contest. Before he injured his elbow, the former lottery pick had become a more regular part of the rotation due to Damian Lillard‘s absence.

The fact that Portland is opting to waive Smith rather than injured forward Joe Ingles, who was acquired for salary-matching purposes at this month’s trade deadline, suggests that the team may still see value in Ingles’ Bird rights. However, with Ingles out for the rest of the season due to a torn ACL, he remains a candidate to be cut in the coming weeks if the Blazers want to make another signing.

The Trail Blazers acquired Josh Hart last week in the trade that sent CJ McCollum to New Orleans, and Hart is the exact type of player coach Chauncey Billups wants, writes Aaron Fentress of The Oregonian.

“He’s my type of player from the standpoint of just being able to go and play both sides of the basketball and just be tough,” Billups said. “Not only tough, but skilled.”

Billups said Hart’s competitiveness shines through: “When he’s out there, he plays with a level of urgency that you love. I’m looking forward to just coaching him.”

In the latest injury report for the Sixers’ Monday game vs. Houston, Powell and Springer are both listed as out, while Thybulle is considered questionable. That suggests that the team is likely waiting for the results of Thybulle’s latest COVID-19 test before determining whether or not he’ll be available.

Wesley Iwundu, who just signed a 10-day contract with the Hawks on Thursday, has entered the NBA’s health and safety protocols, per Adrian Wojnarowski of ESPN (Twitter link). Iwundu played 23 minutes in the Hawks’ 98-96 victory over the Sixers Thursday night, scoring two points and grabbing five rebounds. ESPN’s Bobby Marks tweets that the Hawks will need to sign another replacement player to replace Iwundu — himself a replacement player.

Hawks big man Onyeka Okongwu, who made his season debut last week, has entered the protocols as well, Sarah K. Spencer of the Atlanta Journal-Constitution tweets. In three games this season (22.3 MPG), Okongwu is averaging 10.3 PPG, 5.7 RPG, and 2.0 BPG. The Hawks now have nine players in the protocols.

AUGUST 3: The Blazers have officially signed Watford to a two-way contract, the team announced in a press release.

JULY 30: The Trail Blazers are expected to add undrafted second-year LSU power forward Trendon Watford on a two-way contract, per Adrian Wojnarowski of ESPN (via Twitter).

Watford is listed as the 10th-best undrafted rookie prospect on ESPN. The 6’9″ Birmingham, Alabama native was honored as a 2021 All-SEC Tourney selection and a 2020/21 All-SEC First Teamer.

An athletic rim-roller with a competitive inside floater, Watford could be an interesting addition in Portland.

The NBA has revealed via press release its list of 69 players who have been invited to next week’s draft combine in Chicago and who are expected to attend. The combine will take place from June 21-27.

While those numbers don’t jump off the page, Shannon is a highly-regarded prospect who is a strong candidate to be drafted. He ranks 33rd overall on ESPN’s list of this year’s top 100 prospects and comes in at No. 37 on Jonathan Wasserman’s big board at Bleacher Report.

There was some surprise around the NBA that so many college early entrants decided to withdraw from the 2020 draft before Monday’s deadline, according to Jeremy Woo of SI.com. As Woo observes, the 2021 draft class is widely viewed as stronger than 2020’s, and the ’20/21 college season remains somewhat in flux, given the ongoing coronavirus pandemic.

Still, Woo acknowledges that the stability of returning to a college program was likely appealing for many of those prospects who withdrew, especially since we also don’t yet know what the NBA and G League schedules will look like for ’20/21.

Elsewhere on the draft front, Jonathan Givony of ESPN (Insider link) has updated his 2021 mock draft to account for recent early entrant decisions. Prospects such as Corey Kispert (Gonzaga), Isaiah Joe (Arkansas), Trendon Watford (LSU), and Luka Garza (Iowa), who recently pulled out of the 2020 draft pool, now show up in the second round of Givony’s mock for next year.