With the No. 17 overall pick in the 2012 draft, the Mavs selected Tyler Zeller out of North Carolina. Within an hour, his rights would be traded to the Cavs for three picks that became Jared Cunningham, Bernard James and Jae Crowder. Cleveland trotted him out on the floor for two uninspiring seasons before trading him to Boston in a cap clearing deal that allowed the team to offer a max contract to LeBron James. Zeller hasn’t exactly made either team regret trading him, although Dallas could use a quality starting center right now due to its lack of exciting options and Cleveland was so in need of an interior presence last season, it hurled two first-round picks at Denver to obtain Timofey Mozgov. In both cases, its unlikely Zeller would have received the playing time and touches necessary to develop during his third season in the league. He would have taken a backseat to Tyson Chandler in Dallas and he wouldn’t have taken on a significant role with James and Kevin Love arriving in Cleveland. 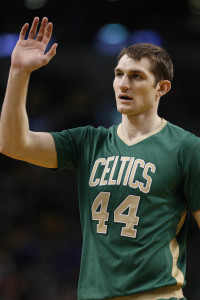 Boston had no such roadblocks to playing time and offensive opportunity and it appears the 25-year-old has found a home. Late last season, Zeller and Marcus Smart were the Celtics least likely to be traded, according to multiple sources who spoke with A. Sherrod Blakely of CSNNE.com. Last month, Blakely wrote that the big man had a better chance than fellow 2012 first-rounders Jared Sullinger and Perry Jones III to end up with a contract extension, and sources told Steve Kyler of Basketball Insiders that chances are 50-50 that Zeller and the team reach an agreement before the deadline this fall.

Zach Lowe of Grantland speculated the team would be happy with an extension with annual salaries up to $12MM, while estimates from ESPN’s Summer Forecast panel suggested annual salaries of $10.6MM would be the going rate for the center. President of basketball operations Danny Ainge is always hesitant to make long-term investments in order to preserve future cap space, but he should be able to offer Zeller an extension in this ballpark and maintain enough flexibility to be a major player in free agency.

The salary cap is projected to rise to $89MM for the 2016/17 campaign. Boston only has slightly more than $43.5MM on the books after this season, though that figure doesn’t include the team options for Smart, James Young and Kelly Olynyk that are almost certain to be exercised provided the trio are still on the roster. Boston also has the non-guaranteed contracts of Amir Johnson and Jonas Jerebko, and if the C’s waive them anytime before the end of July 3rd, 2016, they could clear $17MM from their commitments.

The Celtics will have to account for possible new contracts for David Lee and Evan Turner, both of whom will be unrestricted free agents, as well as the possible extensions for Jones and Sullinger. If the Celtics want to remain flexible heading into next offseason, they could sign Zeller to a reasonable extension and take their chances on the other four in free agency.

The big man set career highs in points (10.2) and assists (1.4) per game during his third season in the league. He also had his most efficient season as a pro, shooting 54.9% from the field. One area where he could use some work is his rebounding. He had 9.7 rebounds per 36 minutes, which isn’t terrible, but 76 players had better stats last season. Zeller spends all of his minutes at the five. It’s unlikely that he can spend time at the power forward position, which would allow him to play next to another center and a more proficient rebounder. If he wants to see starter’s minutes, he’ll need to improve in this area.

Zeller isn’t going to be the type of player who changes the franchise.  He’s not a dominant defender, but he’s been successful at protecting the paint on occasion. Of course, most 7-footers with some mobility will be able to give you that. He runs the floor well and can be crafty on the offensive end, but he can’t be counted on to get crucial buckets late in games. He has certainly improved since coming into the NBA, although some of his success should be credited to coach Brad Stevens. Stevens’ creative pace-and-space offense and conservative defensive schemes have put Zeller in position to succeed.

Environment matters in the NBA. Paying Draymond Green $82MM makes sense for the Warriors because they have other players in place who allow him play his role and not worry about overextending his game. Green wouldn’t be as effective as a main option for a team like the Lakers or Sixers. The same logic applies to Zeller. In the right situation, its justifiable paying him $10-12MM per year. Paying him that kind of salary is a low risk gamble for the Celtics, as they can provide a good situation for the 25-year-old. Zeller has the potential to be an above-average starting center in the NBA, and if he becomes that, an extension at that price point would become a bargain for the franchise.