7:00pm: Head coach Frank Vogel said he expects Rondo “to be part of our playoff run,” according to ESPN’s Dave McMenamin. 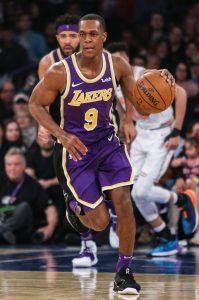 7:19am: The Lakers‘ backcourt depth has taken another hit, as the team announced late last night that point guard Rajon Rondo suffered a fractured right thumb during Sunday’s practice. Rondo will undergo surgery on the thumb and is expected to resume full basketball activities in about six-to-eight weeks, as Mike Trudell of Lakers.com tweets.

With Rondo sidelined and Avery Bradley having voluntarily opting out of the restart, the Lakers will have to lean more heavily on some of their other backcourt options. Kentavious Caldwell-Pope, Danny Green, and Alex Caruso are all candidates to receive a bump in minutes, tweets Anthony Slater of The Athletic.

As Slater points out, recently-signed guards Dion Waiters and J.R. Smith also move up on the depth chart and move closer to assuming rotation roles with Bradley and Rondo out of the mix.

The Lakers won’t be eligible to sign anyone to replace Rondo, since the NBA’s transaction window closed on June 30. At this point, only substitute-player contracts can be signed — and substitute players are only eligible to replace those who are opting out or who contract COVID-19.

Although L.A. will be without Rondo for the eight seeding games and the start of the postseason, his timeline puts him on track to make it back later in the playoffs, assuming the Lakers – as expected – make a deep run. If he were to return to action eight weeks from today (September 7), the Lakers could be in the midst of the Western Conference semifinals at that time.