After going undrafted in 2020, rookie forward Lamar Stevens signed a two-way contract with the Cavaliers and has emerged as a rotation player for the team this season, providing depth off the bench in 27 games to date.

Stevens, who is averaging 4.5 points and 2.7 rebounds in 13.7 minutes per game on the season, recorded a career-best 15 points and 11 rebounds in 17 minutes against the Spurs on Friday. The 23-year-old’s strong defense is a key reason why he’s received a consistent role.

Stevens recently spoke with Hoops Rumors to discuss his rookie season, his experience at Penn State, the Cavs’ culture and more: 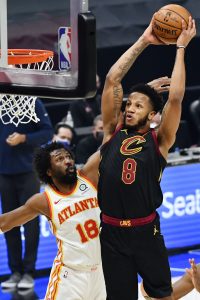 “I think for me it’s been just a lot of learning. Just trying to be a sponge because everything happens so fast for me — really I think for all the rookies without summer league, a shortened training camp and jumping right into the season. It’s just been trying to adjust, trying to learn as much as you can really, really fast. Luckily I have great vets and great coaches that have really spent a lot of time in helping speed up my process. I would say the biggest thing for me is just trying to learn as much as I can, as fast as I can.”

How has playing for the Cavaliers shaped your rookie season? What in your mind is special about this organization in particular?

“I think what’s really special about the organization is really just the commitment to getting better. And I think each day is like, you know, you see the focus from top to bottom. From GM (Koby Altman) to coach J.B. (Bickerstaff). Everybody’s main goal is just to get better and be better than what you were yesterday. With this culture and the vets that we have, with Kevin Love, Larry (Nance Jr.), JaVale (McGee), Taurean Prince and guys like that leading the way for us, it’s been really special. It’s helped me a lot as a young player just to feel comfortable asking questions, or always being able to reach out to somebody to get into the gym at any time — that’s been special for me and has really allowed me personally to help my game grow and my mind grow as a basketball player.”

Take me through that game-winning basket you had against the Hawks. Firstly, just to be finishing a close game as a rookie — let alone an undrafted rookie — is impressive. What was it like for you to be part of such a key moment?

“When I went out there and the way it happened, I was just playing. I really wasn’t thinking about it being the game-winning basket. I think that’s just what’s gotten me to this point — just going in and playing. I think that’s what it was. Both defenders stepped up to Collin (Sexton), he kicked it to me and I just saw the lane and went down to finish it. That was definitely a special moment as a team, definitely one for me, and then ending that 10-game losing streak. Hopefully we can continue that trend of just winning.”

You spent four years at Penn State before the draft. How did your experience with the program help prepare you for the NBA?

“I think my experience at Penn State helped prepare me for the NBA because I feel like I had to work my way up each year just to be a high-level player. Through that, I was able to watch. Me being, maybe not the number one guy, but me being a little bit lower on the totem pole when I first came to Penn State — I paid attention. What was the best thing for me to do as a player or teammate for us to be successful? Fast forward into my senior year, me being the number one guy, I knew what I wanted from everybody from the second guy to the 15th guy.

“Also at Penn State, I was able to build my work ethic. I was able to work on my game. I needed all four of my years just to continue working on my game and put myself in the position I can be in now. It was also the mental part of just knowing when you are the 15th guy on the roster, what do you need to do to show that you can have an impact? What role do you need to take on? How do you have to buy into it? Stuff like that. So I think my four years at Penn State helped me a lot mentally to be prepared to play in the NBA, and definitely just over the years playing in the BIG 10. It made me a much better player. Just the work I was able to put in over the four years I think prepared me to become an NBA player.”

J.B. Bickerstaff has preached culture this season. He’s in his first full season as the Cavs’ head coach, but he’s also been around coaching for nearly two decades. What kind of role has he played in your season and how important is it to establish a respectable culture within the team?

“I think he’s been extremely important. Even during my four years at Penn State, I learned how important culture is. Having guys that will and can buy in to that culture. If you want to build a championship program at any level, I feel like you have to have that culture. You have to have a bunch of guys that believe in that, and J.B. does preach it. I think the main thing he talks about is that we’re going to be the most competitive team and most unselfish team every night. And me, being in the role that I’m in, I just want to kind of be an extension of the player that he’s expecting and that guys should be.

“His belief in me and the instilled confidence that he put into me has allowed me to have success this year. Just the relationship we have — we’re able to really talk about things. I really feel comfortable going with him when I’m not sure or have any questions. Our dialogue has definitely helped me just continue to grow as a player. It’s sped me up and given me confidence just to believe that I can go out and play at a high level.”

What’s been the biggest challenge for you to overcome to this point? That could be team-related, COVID-related, or something else.

“I think for me, with the team that we have and having so many bodies, my main focus is just continuing to stay ready for whatever opportunity may come my way. Also just continuing to work on my defense. That’s the role that’s gotten me onto the court so early on (in my career) and has allowed me to play so many games early on. I’m really confident in my offense game because that’s really all I did while I was in school. I really wasn’t much of a defender. So now it’s like trying to shift my focus to being a consistent menace on defense, and that’s what I think I can do. I think with the goals and the belief that I have in myself, I think that I can be a top defender in this league. I want to continue honing in on that, doing that well, and just continue doing whatever it takes for the team to win. That’s really my biggest focus. Each year, being better than what the Cavs were last year. Just continuing to build on that is probably the biggest thing for me.”

The team is 16-27 and holds the 12th-best record in the East, but the 10th seed isn’t out of reach. You guys are only 3.5 games behind. What do you think the team needs to do to turn it around and make the playoffs — or at least the play-in tournament — this season?

“I think that as long as we continue to buy into the culture that coach J.B. sets, we’ll put ourselves in a really good position to make it to that play-in tournament or playoffs. We have talent on the team, so if we’re consistently being unselfish and making each other better every night, I think we’ll put ourselves in a really, really good position to take it to that and hopefully make the playoffs.”

You touched on this a little bit earlier, but what are you hoping to accomplish in your career? What are some goals that you have?